Highlighting his “conservative track record” and a career built “outside of Washington,” former North Carolina Gov. Pat McCrory on Wednesday announced his candidacy for the Senate in a race that may end up becoming the most hotly contested and expensive Senate battle in the 2022 midterm elections.

The candidate, who served 14 years as Charlotte mayor and was elected governor in 2012 in his second gubernatorial bid, touted his outside-the-Beltway credentials in a video announcing his Senate campaign, emphasizing, “I built my career outside of Washington. As a mayor and governor, I took on the tough fights and the liberals attacked me for it.”

“I made the tough decisions to balance our budget and cut your taxes,” he highlighted. “I have a conservative track record of standing firm. A record built in North Carolina, not Washington, D.C.”

The Senate is split 50-50 between the two parties, but the Democrats hold a razor-thin majority due to the tie-breaking vote of Vice President Kamala Harris, who serves as president of the Senate. That means the GOP only needs a one-seat pickup to regain the majority.

But Republicans are defending 20 of the 34 seats up for grabs in 2022. Besides North Carolina, the GOP is defending an open seat in Pennsylvania, another key battleground, as well as Ohio, Missouri and Alabama.

“The U.S. Senate is split right down the middle,” McCrory notes in his video. “That puts Vice President Kamala Harris in charge, giving the left everything they want to radically change America for generations to come. It’s happening right now. Harris and Biden are opening our borders before they even open up our schools. They’re raising your taxes and even the price of gas.”

He emphasized that “changing Washington begins right here in North Carolina, with you and with me.”

Ahead of McCrory’s announcement, Walker took aim at the former governor, labeling him “a career politician” and charging that McCrory “routinely attacked conservatives, including President Trump.”

Besides Walker, Rep. Ted Budd is considering a bid for the GOP Senate nomination. And Lara Trump, former President Trump’s daughter-in-law who served as a top adviser on his 2020 reelection campaign, is mulling a Senate bid in the state where she grew up. But Lara Trump, who would have to move back to North Carolina if announces her candidacy, has not taken any public steps towards running.

Along with his announcement, McCrory’s campaign released internal polling that suggested he has a “significant lead” over both Walker and Budd in a three-way contest and increases in a two-way showdown. The memo argues that  “McCrory is well positioned to be the next Republican nominee for U.S. Senate in North Carolina.” 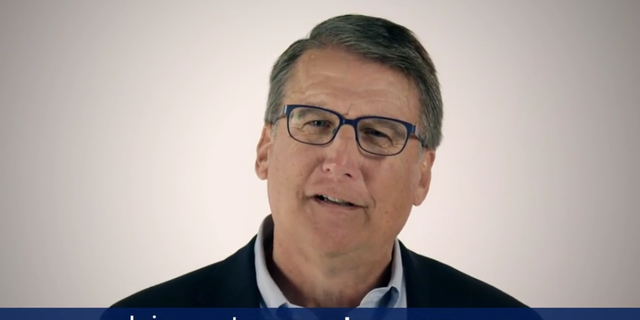 Former Republican Gov. Pat McCrory of North Carolina in a campaign video announcing his run for the U.S. Senate, on April 14, 2021.

McCrory lost his 2016 bid for reelection as governor to Democratic challenger and now-Gov. Roy Cooper. He’s hosted the “Pat McCrory Show,” which his campaign spotlighted is the “top-rated talk radio show in Charlotte,” since 2017.

Long a red state, North Carolina has become increasingly competitive in recent cycles. Last November former President Trump narrowly captured the state by a razor-thin margin over now-President Biden. And GOP Sen. Thom Tillis won reelection by less than one point when Democratic challenger Cal Cunningham was politically wounded after news of his extramarital affair made major headlines prior to the election.

Nearly $300 million – a record – was spent by all sides in the 2020 Senate showdown in North Carolina, and the 2022 race is also expected to be extremely expensive.