Two former U.S. Army rangers who served in Afghanistan are blasting President Biden for having “no plan” for withdrawing from the country and then blaming others for the “dumpster fire” that ensued.

Dan Blakeley and Tom Amenta, who recently came out with a photo journal dedicated to veterans titled “The Twenty Year War,” spoke to Fox News on Wednesday about what went wrong with the exit from Afghanistan.

“They should have had a plan, because they clearly didn’t,” said Amenta. He went on to cite the administration’s message to Americans in Afghanistan outside Kabul earlier this week that instructed them to get to Kabul but let them know that no one would be coming to help.

“This administration did not [have a] plan and does not have one,” he said.

“From a political standpoint,” Amenta continued, “the policy that he’s enacting right now in Afghanistan not only makes no sense because the Taliban is the organization that supplied, resourced, and harbored Osama bin-Laden 20 years ago and now they’re back in power,” but Afghanistan also poses a higher threat of terror than other areas where the U.S. still has a presence. On top of all that, he said, what is happening in Afghanistan now “is an unmitigated humanitarian disaster.”

Amenta, who spent five years in a special operations unit and has a degree in political science with a focus on international relationships from University of Illinois, noted that it is particularly bad “when the book geek and the gun geek” in him “both think you’re screwing up.”

Blakeley agreed, adding that when the Biden administration vowed that the Taliban would not swiftly take over the country, the president “should have also put some pretty hard line plans in place of how to respond” if that did happen. 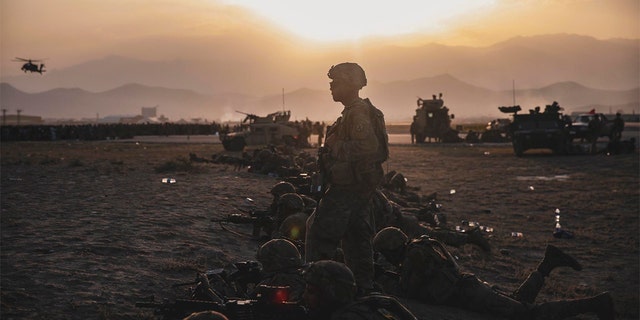 Amenta said that what upsets him the most is the narrative put forth by Biden that Afghan forces did not have the will to fight for their country, given that 34,000 had died as of 2015 before the Trump administration classified the numbers. On top of that, the Brookings Institution estimated that between 2014 and 2020 the Afghans suffered 45,000 casualties.

“At the very least, they’ve been committed to this with the blood of the people,” he said.

“I’m appalled, I’m truly appalled that the administration would choose to say that they don’t have a will when they have allowed many of their people to die in the service of this ideal of building a new nation, when we know that the government wasn’t paying these men properly, they weren’t even feeding them properly.”

Amenta recalled how Afghan fighters were “so dialed in to the tiniest little detail of operational security,” giving an example of how they would not tie their boot laces until needed because the indents from the eyelets would give them away once they changed into sandals upon donning civilian clothes.

“This is what these men were going through, and we’re going to say that they didn’t have the will to fight?” he asked.

“The narrative that’s being put out by this administration makes me the angriest because it’s so patently false.”

While they have strong criticisms for how the Biden administration has carried out its withdrawal from Afghanistan, both Blakeley and Amenta agreed that it was time to pull out.

“We have always needed to find a plan to either leave Afghanistan and say enough is enough,” Amenta said, or at least “have the tiny footprint presence” like the U.S. has in Iraq, Syria, or the horn of Africa “with the very specific, narrow purview” of being able to “handle any emerging terror threat.”

Blakeley echoed this sentiment, noting that no veteran he has spoken to wanted “a forever war.”

It was former President Trump who first planned for a withdrawal that was originally set to take place by May 1 of this year. Amenta said that the deal, which was made with the Taliban, was “an awful, failed deal,” comparing it to if the U.S. made a Middle East peace agreement by only talking to Palestinians and not Israel.

Nevertheless, he said, he trusted that the Trump administration would have responded more strongly once things went bad.

“He would have squashed it,” Blakeley agreed.

While readily criticizing Trump’s deal, Amenta also slammed Biden for blaming the deal for the current state of affairs.

“He had every opportunity to walk that back,” Amenta said, adding that once the Taliban violated the deal, the president “had a million different tools” at his disposal, such as sanctions or military force.

Despite the present dire situation and the fact that the Taliban is once again in control of Afghanistan, both Blakeley and Amenta made clear that their fellow veterans who served there should not be down on themselves or think what they did was for naught.

Blakeley said he is pleased to see the support coming from the veterans community thus far.

“A lot of organizations and businesses that are run by veterans or in support of veterans have been coming out left and right in the last couple of days saying that this was not all for nothing and you did your job right, and you did it with justice, and you did it with fervor, and you were there to provide safety and opportunity to the Afghan people and you did that for two decades,” he said.

Some of Biden’s critics have likened the withdrawal to Vietnam, but Blakeley made clear that for those who served, that is certainly not the case.

“This has not been the next Vietnam for our veterans,” he said.

Blakeley and Amenta both credited the fact that there was no repeat of the Sept. 11 attacks to the U.S. effort to combat terror, and that how the war ended does not take away from what they accomplished.

“Just because the current administration had no plan for the way it was going to end and chose to … arrogantly think that they could somehow solve something that hadn’t been solved in 20 years in a couple of months,” Amenta said, “that is not on the veterans, that is not on our service, that is in no way shape or form a repudiation or a knock on all the things that we did and how hard we worked to keep not just the United States, but the world safe from terrorists.”