How would Biden’s student loan forgiveness plan impact the economy?

Progressive Democratic lawmakers are moving full steam ahead in their efforts to create policy under a Joe Biden administration to cancel student debt.

In recent days, lawmakers including Sens. Elizabeth Warren of Massachusetts and Chuck Schumer of New York – as well as members of the so-called "Squad," a group of four progressive congresswomen – have urged the president-elect to consider policy proposals to cancel student debt.

In a Nov. 11 op-ed laying out a number of progressive policy ideas, Biden and Vice President-elect Kamala Harris should tackle once they take office, Warren included the cancelation of student debt among her suggestions.

"Cancel billions of dollars in student loan debt, giving tens of millions of Americans an immediate financial boost and helping to close the racial wealth gap. This is the single most effective executive action available to provide massive consumer-driver stimulus," she wrote, along with other suggestions, such as declaring the "climate crisis a national emergency" and "establish a Racial and Ethnic Disparities Task Force."

But the cancelation of student debt does not solve the root of the problem, which is the increasingly high cost of college — especially private college.

Additionally, student debt cancelation could disproportionately benefit the top 40% of American households (those with incomes above $74,000), according to an analysis from the Brookings Institution, a liberal think tank.

According to the Federal Reserve, there are about 45 million borrowers who owe a collective of roughly $1.6 trillion in federal and private student loan debt as of June 2020. That's up from $250 billion in 2004.

Graduates of private nonprofit and public colleges owed an average of $28,950 in 2019, according to an October report from the nonprofit Institute for College Access and Success.

"What we have in place and we need to improve is a system that says, 'If you cannot afford your loan payments, we will forgive them,'" Sandra Baum, a student loan scholar at the Urban Institute, said at a Brookings Institution forum in October 2019.

"The question of whether we should also have a program that says, 'Let’s also forgive the loan payments even if you can afford them' is another question."

Under Warren's plan to forgive up to $50,000 in student debt for households making less than $100,000, and offer some relief to households that make more than $100,000, 60% of American households would only get 34% of the benefit, according to an April 2019 analysis from Brookings. 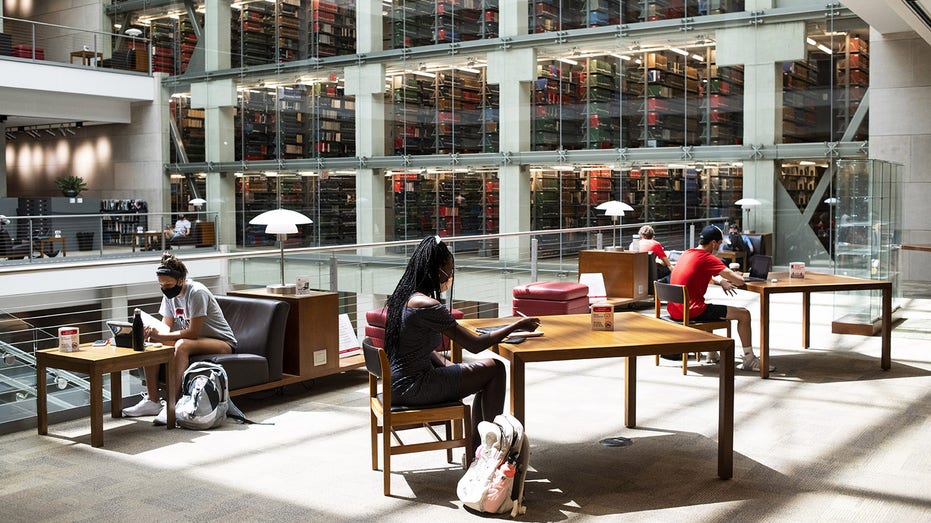 Students wearing protective masks study inside of the Thompson Library on the first day of classes at Ohio State University in Columbus, Ohio. (Ty Wright/Bloomberg via Getty Images)

The top 40% of U.S. households, however, also owe almost 60% of the outstanding educational debt and make almost three-quarters of the payments, recently released data from the Federal Reserve’s Survey of Consumer Finances shows.

Meanwhile, the lowest-income 40% of households hold just under 20% of the outstanding debt and make only 10% of the payments.

Brookings' analysis also raises the question of whether canceling student loan debt for some would be fair to those who have already spent years working to pay off tens of thousands of dollars in debt, which, as Warren and other lawmakers have mentioned, can set graduates back from taking other large steps, such as buying homes and starting families.

Analysts from the Levy Institute have predicted that canceling student loans could increase GDP by an average of $86 billion to $108 billion per year.

However, some remain skeptical of the long-term economic benefits, including former chairman for President Obama's White House Council of Economic Advisers, Jason Furman.

He claimed on Monday that student loan forgiveness would only offer a "small positive" multiplier in the immediate future rather than any large economic benefit in the long-term future, due to the fact that forgiveness is taxable.

On the campaign trail, Biden said he would propose forgiving $10,000 in student debt for all borrowers in exchange for public service. In addition, he also wants to make public colleges and historically Black colleges tuition-free for students from households earning less than $125,000 a year and double the maximum amount of Pell grants – which can be used to cover living expenses and don’t need to be repaid – to roughly $13,000 a year for low- and modest-income students.

While there is no exact estimate for a student loan forgiveness plan's price tag, the Congressional Budget Office estimated that just the cancellation of $10,000 in student debt for all borrowers could cost between $250 billion to $300 billion, piling on to the growing national debt of over $27 trillion.