Much has been said about the skilled negotiators at the AFL and the slick auction process that resulted in the football code raking in a $4.5 billion contract over seven years. It was a number that was larger than even the AFL was hoping for. 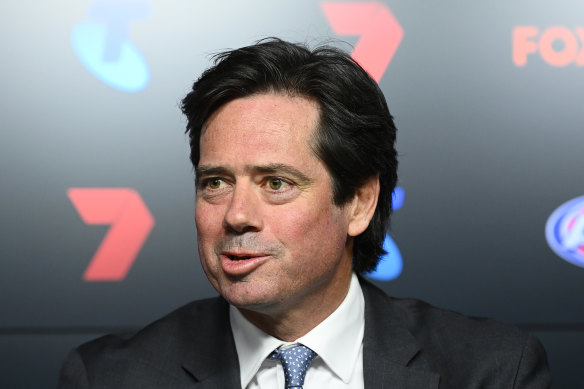 AFL CEO Gillon McLachlan speaks to the media on Tuesday.Credit:Getty

There was a silent auction, big-name media companies, and lots of phone-jockeying with bidders which culminated in a late-night mega-deal – and it was negotiating mastery worthy of its own Netflix series.

But in an era where competition for eyeballs has never been so fierce, the value of not just content but really compelling content cannot be underestimated.

The result was undoubtedly a wonderful outcome for sport but a worrying portent for those paying for the broadcast rights.

This deal will be closely watched by other must-have sports including the rugby league, tennis and cricket.

Arguably, there is no more valuable piece of programming property in Australia than the AFL.

To have achieved this financial outcome with a limited number of bidders in the auction room says as much about the desperation of bidders as it does about anything else.

This is particularly so given rival bidder Nine’s free-to-air television service would have been constrained schedule-wise given it already holds the NRL broadcast rights. (Nine is the owner of this masthead).

Paramount, which owns Channel Ten and streaming service Paramount Plus, was the aggressive counter-bidder in the process that pushed the Foxtel Group and Seven to pay up.

For Seven, the cost of the AFL will be $1.3 billion over the lifespan of the contract, or an average $189 million a year, according to number crunching by investment bank Goldman Sachs.

That compares with Seven’s current contract, which runs between 2020 and 2024 and has a $146 million average annual price, according to the Goldman analysts. In other words, the current deal represents 30 per cent inflation.

That said, Stokes in particular has long been a vocal true believer in the value of marquee sporting events.

And while Goldman Sachs has marginally downgraded Seven’s 2025 earnings on the back of the higher cost of the AFL, it is not particularly significant.

Foxtel will ultimately bear the brunt of the higher AFL costs. On the face of it, the competition war in media has moved from free-to-air networks to streaming services.

But the traditional demarcation between free-to-air broadcasters and pay-for-services has become increasingly blurred.

The free-to-air networks’ digital channels and broadcast video on demand (BVOD) streaming services have greatly enhanced their programming bandwidth and their options to broadcast a larger number of games, and provided them with another source of advertising revenue.

And while growth in these areas has helped free-to-air networks offset the longer term structural decline in linear television, it hasn’t provided the capital to fund sports rights inflation or compete with international streaming services.

Anti-siphoning laws, which dictate that certain games must be available free, provide a level of protection for the television networks against international streaming giants.

But in the final analysis, there has to be a financial return for paid and free programming.

The rich AFL bidding war comes at a time when the economy is widely anticipated to slow as rising interest rates will bite into consumer and business spending.

In such an environment, pressure will mount on all media companies that depend on advertising revenue.

In a note from Macquarie on Wednesday, it told investors in reference to traditional media companies: “Our view on the advertising markets remains negative despite relatively positive trading updates over the last few weeks. We expect the cycle to turn in the first half of calendar 2023.”