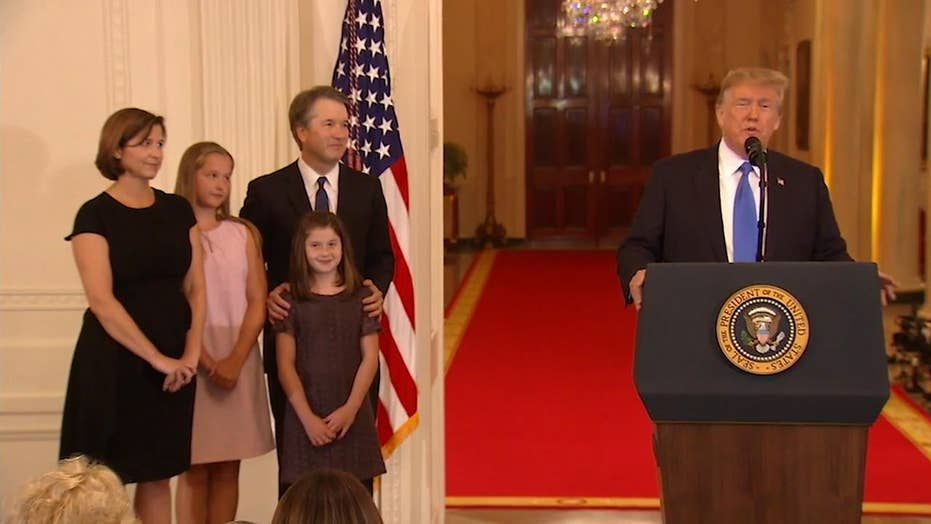 The name of Supreme Court Justice Brett Kavanaugh thrust back into the headlines after the New York Times issued a major revision to an article detailing an allegation of sexual assault against Kavanaugh during his freshman year at Yale.

Previous allegations of sexual assault and misconduct nearly derailed Kavanaugh's nomination to the U.S. Supreme Court — that saga is detailed in the Fox Nation series "The Conservatives."

"Kavanaugh had coasted through his hearings until at the 11th hour, Democrat Dianne Feinstein released allegations from Christine Blasey Ford against the nominee.  Ford then testified that Kavanaugh had assaulted her back in high school," narrated senior political analyst Brit Hume.

Hume also recounted a stunning moment during the hearings when Republican Judiciary Committee member Lindsey Graham R-Sc. issued a stern rebuke to his Democratic colleagues and a warning to his fellow Republicans.

"To my Republican colleagues, if you vote 'no', you're legitimizing the most despicable thing I have seen in my time in politics," said Sen. Graham.

Coverage of the Kavanaugh hearings is also re-examined in the series.

Nearly one year ago, in midst of the confirmation battle, Senate Judiciary Committee member Mazie Hirono (D-HI) called on the media to question Senate Republicans' handling of the allegations, saying, "I expect the members of the press to talk about how unfair that is. I don't think that is editorializing, that is laying out the facts."

Additionally, Sen. Hirono offered the following advice to nearly half the country, "I just want to say to the men of this country: Just shut up and step up. Do the right thing for a change."

Host of "MediaBuzz", Howie Kurtz looked back at the atmosphere at the time. "There was a built-in predisposition to believe Christine Ford, not to believe Brett Kavanaugh, even though the allegations were back in high school, [the] first year of college, 35-36 years earlier.  While the media needed to cover all sides of this story, they were much, much harder on Brett Kavanaugh and not very aggressive when it came to — even thinking about — challenging the account of Christine Ford."

'PART OF WHAT MOTIVATED' CHRISTINE BLASEY FORD WAS TO PUT POLITICAL 'ASTERISK' ON KAVANAUGH, LAWYER ADMITS

To see the rest of this episode and the entire "Conservatives" series, visit Fox Nation and join today.