Politicians, celebrities and news outlets will be able to control who can comment on their public Facebook posts under a new measure by the social media giant aimed at limiting defamatory or otherwise unwanted views posted by users.

Media companies have routinely criticised Facebook for not being able to control how readers respond to posts published on the platform despite being legally responsible for them.

The new product announced by Facebook will look to resolve this issue by giving users, such as news outlets and high profile figures, the ability to restrict comments on posts. Comments can be limited to friends of a particular Facebook page or to profiles or pages specifically mentioned in the post. 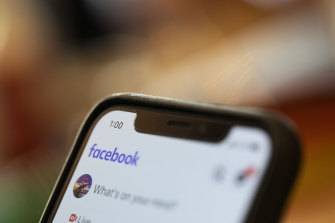 Facebook will give news outlets and politicians more control over comments on their posts. Credit:AP

“By adjusting your commenting audience, you can further control how you want to invite
conversation onto your public posts and limit potentially unwanted interactions,” Facebook said in a blog post.

“And if you’re a public figure, creator, or brand, you too can choose to limit your commenting audience on your public posts to help you feel safe and engage in more meaningful conversations with your community.”

For news outlets such as The Sydney Morning Herald and The Age, the new function offers a way to restrict readers on Facebook from commenting on legally sensitive articles.

Media outlets including Nine Entertainment Co, the publisher of this masthead, and News Corp are preparing a High Court challenge to a NSW court ruling that they are “publishers” of allegedly defamatory comments made by readers under posts on the news outlets’ official Facebook pages.

It has long been the case in defamation law that a person can become legally responsible for the “continued publication” of defamatory comments by others on their physical noticeboards or walls once they are aware of the comments and fail to remove them.

In a case involving former Northern Territory youth detainee Dylan Voller, the NSW Court of Appeal said in June last year that media outlets including The Sydney Morning Herald and The Australian were publishers of readers’ comments on Facebook posts “from the outset” because they “encouraged and facilitated” the comments.

Until now, the media outlets have been unable to turn off comments on public pages, prompting at least one media outlet to set up a members-only private Facebook page for some stories. The High Court decision will still be relevant in clarifying the circumstances under which a media outlet and others may become legally responsible for the defamatory comments of third parties on social media pages under their control.

The move by Facebook also comes as the social media company battles accusations that it intentionally polarises users and exploits human anxieties in its pursuit of profit.

Nick Clegg, vice president of global affairs at Facebook, on Wednesday evening published an essay defending the social media network against these criticisms. Mr Clegg argued Facebook’s systems are not designed to reward provocative content and said the company demotes posts which are clickbait or misinformation as advertisers don’t want their brands and products displayed next to extreme or hateful content.

“The reality is, it’s not in Facebook’s interest – financially or reputationally – to continually turn up the temperature and push users towards ever more extreme content,” he said.

Mr Clegg also acknowledged the need for more regulation in the space and said private companies like Facebook shouldn’t be making so many big decisions about what content is acceptable on their own.

“It would be better if these decisions were made according to frameworks agreed by democratically accountable lawmakers,” he said.