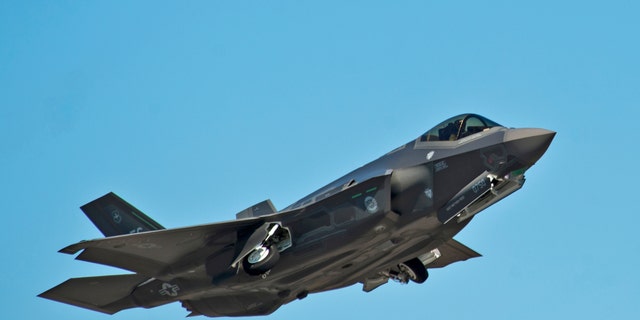 The Pentagon’s F-35 is conducting attacks, surveillance operations and combat missions with an updated on-board “threat library” of Mission Data Files engineered to identify enemy threats in key regions around the globe.

“The AORs (Areas of Responsibility) for current operations where our forces are — currently have adequate Mission Data Files,” Vice Adm. Mat Winter, Program Executive Officer for the F-35 program, told a group of reporters.

Described as the brains of the airplane, the “mission data files” are extensive on-board data systems compiling information on geography, air space and potential threats– such as enemy fighter jets — in areas where the F-35 might be expected to perform combat operations, Air Force officials explained.

Despite some delays with development, involving software engineering and technical development at Eglin AFB, Fla., the process is now fully on track to finish by 2019, Winter said.

Naturally, Air Force senior weapons developers do not comment on specific threats in specific areas around the globe, developers do acknowledge the threat library will include all known and future threat aircraft — which of course includes advanced Chinese and Russian 5th-generation fighters. For security reasons, Air Force officials do not wish to confirm this or specify any kind of time frame for their inclusion.

Overall, there are 12 geographical regions being identified to comprise the library, service developers say.

“We have not fully verified all Mission Data Files for all of the regions where we will operate, but we are slated to be ready by 2019,” Winter said.

The mission data files are designed to work with the aircraft’s Radar Warning Receiver engineered to find and identify approaching enemy threats and incoming hostile fire. The concept is to use the F-35s long range sensors to detect threats – and then compare the information against the existing library of enemy threats in real time while in flight. If this can happen at a favorable standoff range for the F-35, it will be able to identify and destroy enemy air-to-air targets before being vulnerable itself to enemy fire. For example, the mission data system may be able to quickly identify a Russian MiG-29 if it were detected by the F-35’s sensors.

“There is continued collaboration between intelligence and acquisition teams,” Winter said.

The Mission Data Files are intended to support the F-35’s sensor fusion so that information from disparate sensor systems can be combined on a single screen for pilots to lower the cognitive burden and quicken the decision-making process. New modules for mission systems will integrate into the F-35s Distributed Aperture System sensors and Electro-optical Targeting System.

The threat warnings generated by the F-35s Mission Data Files are designed to integrate with other on-board electronics such as targeting sensors. Much of this draws upon computer algorithms increasingly supported by AI, Winter said.

“Our fusion engine gets advanced sensors technology to rapidly identify and track targets without the pilot having to do all the work. This fusion is enabled by Mission Data Files,” Winter explained.

This concept regarding integrated threat warnings and the Missile Data Files is further reinforced in a Lockheed Martin engineering paper from early this year called “F-35 Mission Systems Design, Development and Verification.”

While many developers cite significant challenges when it comes to software development and integration for the F-35, the fighter is widely regarded as a “flying computer.” The “fusion” or technical integration on board the aircraft is engineered to access and leverage a wide range of data points and condense them for the pilot. In essence, surveillance, computer processing and targeting data are fused, as opposed to being stovepiped or separate sources. As a result, the technology also incorporates Identification Friend Foe (IFF) surveillance systems designed to quickly distinguish friendly from enemy aircraft.

The new hardware and software technology, to be operational on the F-35 by 2021, includes seven racks per aircraft consisting of 1,500 module components, including new antennas and weapons release systems.

Some of the components include an Advanced Memory System (AMS) engineered to improve data storage and generate higher resolution imagery to help pilots with navigational and targeting information.

The data processing increase is exponential, developers explain, as it enables measurements to take place in terabytes instead of megabits or megabytes.

The upgrades include a portable memory device which can quickly be transferred from a ground station to the F-35 cockpit.

“Mission data has been fielded in support of version 2B, 3i, and 3f,” Air Force spokeswoman Emily Grabowski told Warrior earlier this year.

The Air Force is already working on a 4th drop to be ready by 2020 or 2021. Following this initial drop, the aircraft will incorporate new software drops in two year increments in order to stay ahead of the threat. The service is also working to massively quicken the pace of software upgrades as a way to respond quickly to new threats.

Block IV will include some unique partner weapons including British weapons, Turkish weapons and some of the other European country weapons that they want to get on their own plane, service officials explained.

Block IV will also increase the weapons envelope for the U.S. variant of the fighter jet. A big part of the developmental calculus for Block 4 is to work on the kinds of enemy air defense systems and weaponry the aircraft may face from the 2020’s through the 2040’s and beyond.

In terms of weapons, Block IV will eventually enable the F-35 to fire cutting edge weapons systems such as the Small Diameter Bomb II and GBU-54 – both air dropped bombs able to destroy targets on the move.

The Small Diameter Bomb II uses a technology called a “tri-mode” seeker, drawing from infrared, millimeter wave and laser-guidance. The combination of these sensors allows the weapon to track and eliminate moving targets in all kinds of weather conditions.

The emerging 4th software drop will build upon prior iterations of the software for the aircraft.

Following Block 2B, Block 3i increases the combat capability even further and the now operational 3F brings a vastly increased ability to suppress enemy air defenses.