Orly Taitz, the California dentist-lawyer who was a leader in the “birther” movement to delegitimize former President Barack Obama, said Tuesday she would “absolutely” be willing to join President Donald Trump’s legal team on its mission to overturn the will of the American people and give the president a second term.

But even Taitz ― who said in an hourlong conversation with HuffPost that she still isn’t sure whether Obama was actually born in Kenya ― she didn’t agree with the ludicrous assertion that Trump actually “won in a landslide,” as claimed by Trump attorney Jenna Ellis.

“I don’t know, I wouldn’t go that far,” Taitz told HuffPost, adding that she doesn’t “have the evidence that Jenna Ellis or Rudy Giuliani have.” 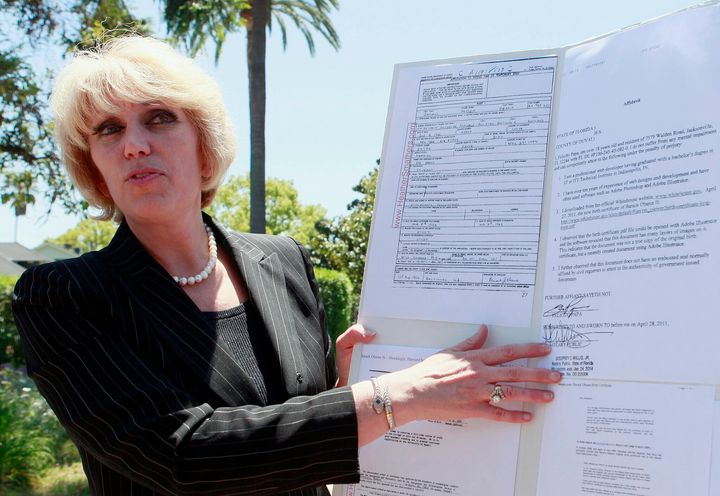 Ellis, a former Trump critic who is now part of what she’s called Trump’s “elite strike force team,” has made a series of claims about voter fraud unmoored to reality. But in court — where Trump and his supporters have won fewer matches than the Washington Generals ― even Giuliani was forced to admit (during his disastrous argument before a Pennsylvania judge) that the Trump campaign wasn’t actually alleging fraud. The federal judge in Pennsylvania, a Republican and a member of the Federalist Society, called out the Trump campaign’s attempt to disenfranchise almost 7 million voters and said such a request was wildly out of touch with the U.S. Constitution.

Taitz, who like the Trump team filed a series of unsuccessful lawsuits that were practically laughed out of court, praised Giuliani as a top attorney who took on organized crime in New York as well as Sidney Powell, who was recently ousted from the Trump team after promoting wild conspiracy theories about voter fraud during a press conference at the Republican National Committee.

“After all, if we could have a president with a stolen SSN of someone born in 1890, why can’t we have voters with stolen IDs from 1900?” she wrote. “I believe, President Trump and his legal team are the only ones in this country with enough backbone to expose and prosecute this fraud.”

Taitz said she was willing to give Trump’s team “whatever help they need,” but said she wasn’t sure they would need assistance because they were “prominent, very capable attorneys.” Giuliani, the recent unwitting star of “Borat Subsequent Moviefilm,” did not respond to HuffPost’s request for comment on WhatsApp.

Like Powell, Taitz floated a conspiracy theory about communists from Venezuela rigging voting machines to favor President-elect Joe Biden. Taitz said she watches the right-wing network One America News (OAN) and reads the conspiracy website Gateway Pundit, as well as Breitbart and occasionally Fox News. Like Giuliani, Taitz claimed there was “total lawlessness and corruption” in majority Democratic cities like Philadelphia and Detroit. (In both cities, Trump received more votes in 2020 than he did in 2016.) Taitz said “having honest elections has nothing to do with racism,” and called Trump “a fighter” who she hopes would champion “civil rights” even if Biden takes office.

“I wouldn’t be surprised if Donald Trump, if he does not succeed in this election, will be the new civil rights leader, where we will have to fight for our civil rights,” Taitz said.