The European Union plans to use its diplomatic and economic muscle to accelerate global energy transition away from fossil fuels, as the bloc aligns its foreign and security policy with its ambitious climate objectives.

“EU energy diplomacy will discourage all further investments into fossil fuel-based energy infrastructure projects in third countries, unless they are fully consistent with an ambitious, clearly defined pathway towards climate neutrality,” foreign ministers are poised to say in a joint communique on Monday.

“The EU will ensure that its trade policy and its trade agreements are consistent with its climate ambition,” ministers will declare, according to a draft of their statement obtained by Bloomberg. 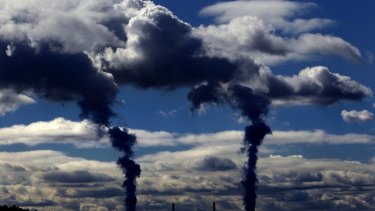 The EU is getting tougher on fossil fuel emissions.Credit:Jonathan Carroll

EU leaders committed last month to cut the bloc’s 2030 greenhouse emissions by 55 per cent compared to 1990 levels, and affirmed their pledge to turn Europe into the world’s first climate-neutral continent by 2050. Alarmed that the bloc’s ever stricter environmental regulations will simply force polluting activities to relocate elsewhere in the world, they are eager to eliminate “carbon leakage” by forcing the rest of the globe to fall in line with the Paris Agreement against climate change.

The EU’s executive arm is drafting a law, to be unveiled by June, that would start penalising imports of certain goods from countries with weak pollution rules, thereby helping to protect the competitiveness of local producers abiding by stricter standards. This push to export climate standards got a boost last week when President Joe Biden moved to restore the US as a member of the Paris climate accord, which seeks to limit global temperature increases to 2 degrees Celsius through steep reductions in greenhouse gas emissions.

The Biden administration is planning to host world leaders in a climate summit on Earth Day in April, a sign of the new president’s commitment to strengthen the Paris agreements. Biden, who has signaled he wants the US to encourage stronger climate action globally, will likely find the EU as a major ally in his initiatives.

“EU and member states’ foreign and security policy will systematically consider climate and environmental factors and risks,” the bloc’s foreign ministers will promise, according to the draft of their statement, which is still subject to changes when they meet in Brussels to discuss the wording on Monday. The transition to clean energy is highlighted as a security consideration, as it will reduce the EU’s “strategic dependencies” on imports from other countries.

The pledges are the latest in a series of policy initiatives comprising the so-called European Green Deal, a comprehensive package of measures that will push every sector of the region’s economy toward low and eventually zero greenhouse emissions. Officials in Brussels hope the sweeping overhauls will also help the bloc assert its “strategic autonomy,” which is constrained by the dollar’s dominance in international finance.

The European Commission is already on course to become the world’s largest issuer of green and social debt, which will be jointly backed by all EU member states. Brussels expects the issuance will turn the EU into a “global ‘green finance’ hub, bolstering the euro as the default currency for the denomination of sustainable financial products,” according to a policy document unveiled last week.

Adding to signs that weaning off dollar dependence has turned into a central policy objective, ministers on Monday will pledge to promote “the use of the euro in energy trading,” according to the draft of their statement.