Profits are under pressure. Production levels are stalling. It has taken massive losses on a crazy investment in Bitcoin. It has lost its top slot in the fast -growing market for electric vehicles to China’s BYD. Elsewhere, established rivals from Volkswagen to Toyota to Ford are catching up fast. Add in a 40 per cent drop in the share price over the last year and surely it can’t be long before investors ask the question: is Musk now more a liability than an asset?

Musk is undoubtedly one of the great entrepreneurs of recent times. Tesla has grown from nothing into one of the giants of the automotive industry in a way that would have seemed unimaginable at the time it was founded. Musk has helped steer this journey from the start and, with a 17 per cent stake, he is the dominant voice on the board. But he is in danger of undoing all the good work he has done. He is already damaging the brand, and very soon may be dragging the company down as well. 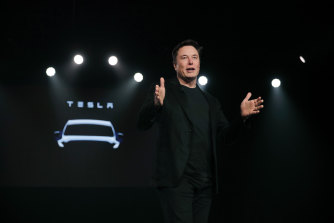 Elon Musk is undoubtedly one of the great entrepreneurs but he is in danger of undoing much of his good work at Tesla.Credit:AP

Steve Jobs was famously ousted at Apple, before returning a decade later far wiser and smarter – a true leader. Musk will almost certainly hang on given his powerful position, but that may not be the best decision for the company.

No one ever expected “normal” from Musk. Anyone who has a couple of kids named Exa Dark Sideræl and X AE A-XII, and prices his bid for a major quoted company based on a slang term for marijuana, has clearly decided that “conventional” is not one of the epitaphs they want attached to their obituary. There is nothing wrong with that. Most of the greatest entrepreneurs in history are deeply weird. It is part of the personality mix that allows them to create something extraordinary out of very little, and investors are typically relaxed about the odd ticks of great innovators.

Over the course of this year, however, Musk has started to cross over the line from “whacky” to “bonkers”. When Tesla reported third-quarter earnings earlier this week they were not good. Revenues were down by 9 per cent compared with the second quarter, ending a long run of consistently rising sales. Profits were equally disappointing. It recorded massive losses on its holdings of Bitcoin, raising questions about what on earth it was doing betting so heavily on volatile cryptocurrencies in the first place.

True, to character, Musk was all over the place when he attempted to explain what was happening at the company. Tesla’s price increases were “embarrassingly high” he remarked casually. That is, to put it mildly, an odd thing for the chief executive to say (presumably someone at Volkswagen’s ad agency is mocking it up into a campaign slogan right now).

Tesla is struggling to maintain its early dominance of the market for electric cars. China’s fast-growing BYD has overtaken it in total global sales, and is already embarking on foreign expansion with a move into Japan. Volkswagen, Ford, Toyota and more have all invested billions in catching up. From next year each will start having attractive ranges of competitively priced electric vehicles in their showrooms.

At precisely the moment Musk should be focusing on preserving Tesla’s lead he is distracted elsewhere. He is now engaged in what will inevitably turn into a long and bitter legal fight with Twitter after pulling out of his offer for the company. His expensive lawyers will no doubt make a good case, but everyone always knew there were lots of fake accounts, and all Musk has done is make himself look hopelessly unreasonable.

At the same time, new families keep popping up all over the place. Only this month it emerged he had twins with one of his executives, while his on-off partner, the singer Grimes, is due to have another baby soon. We suspect that Elon is not a 100 per cent signed up to sharing parenting chores equally. Even so, it sounds exhausting. Over the weekend, it emerged he is suspected of having an affair with Sergey Brin’s wife Nicole Shanahan. Is Musk a 100 per cent concentrating on the day job? Does he have the clarity it needs? Or the concentration? It seems unlikely, to say the least.

There are precedents for flamboyant founders being pushed out of the companies they built. Travis Kalanick was removed from Uber when his chaotic management style threatened to derail the company. Then of course there is the Jobs example. Just because you are the main architect of a company does not mean you can run it forever, regardless of how badly you are doing. Nor does it mean that you can never be fired. It has happened plenty of times before, and it can happen again. 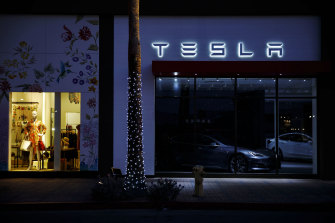 Tesla is facing an increasing number of headwinds.Credit:Bloomberg

Musk still owns almost a fifth of Tesla, even if he does end up having to sell a few shares to fund a settlement with Twitter. He is not yet at the stage where the board is plotting against him, or where shareholders are openly calling for his resignation. But he is clearly losing his grip. In truth, Musk has become a liability at Tesla. He has picked too many fights, spread his energies too thinly, and shown little appetite for the discipline and focus required to run one of the biggest companies in the world, and one that should still be growing at an accelerating rate.

If he was mature enough, he would step aside for a time and let more professional managers take the company to the next stage. If he doesn’t, others may start to try to extract him against his will. Better to bow out gracefully.