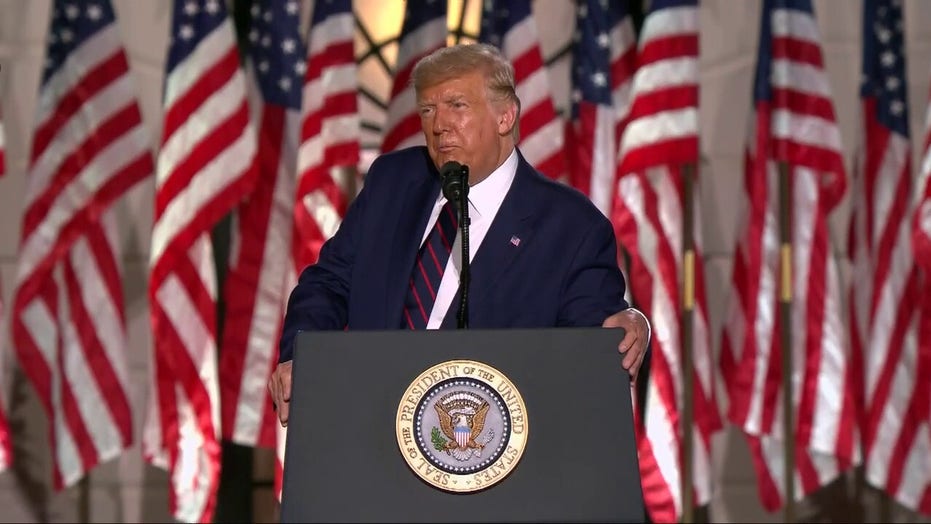 President Trump delivered one of the best speeches of his political career Thursday night as he accepted the Republican National Convention’s nomination for a second term, boosting his chances for reelection.

The president’s 70-minute speech was highly effective in the sense that he drew clear and arguably persuasive contrasts between himself and former Vice President Joe Biden in many areas, including their broad-based visions for America, the economy, and law enforcement.

In a way that was reminiscent of Trump’s positioning during the 2016 campaign, the president made it clear that he is running as an outsider and a non-politician against Democratic presidential nominee Biden, who Trump characterized as embodying the political class and the establishment.

Moreover, Trump’s thematic attacks on Biden and the Democrats resonated, as Trump presented the choice between himself and Biden as a choice between freedom versus socialism, and optimism versus negativity.

Further, Trump’s speech and the Republican Convention as a whole made an effective economic case for his reelection, portraying Trump as being capable of leading the nation’s economic recovery and restoring our financial markets to pre-coronavirus pandemic levels. This is notable, given that the Democratic National Convention remarkably lacked a cohesive economic message.

“We will build the greatest economy in history,” said Trump, later arguing that the election will decide “whether we rapidly create millions of high-paying jobs, or whether we crush our industries and send millions of these jobs overseas, as has foolishly been done for many decades.”

Moreover, the Republican Convention also successfully underscored Trump’s and Republicans’ core message that they are the party of “law and order” — a theme that was undeniably made more impactful by the current urban unrest in swing states, such as Wisconsin, and by convention speakers who were crime victims.

“Your vote will decide whether we protect law-abiding Americans, or whether we give free reign to violent anarchists, agitators and criminals who threaten our citizens,” Trump said.

All this combined to make the Republican Convention effective at communicating Trump’s message for reelection, and drew a strong contrast between him and Biden.

However, last week’s Democratic Convention was also a success in the sense that it portrayed the Joe Biden-Sen. Kamala Harris ticket as competent, decent, and welcoming to a broad-based coalition — while also making a compelling case for the need to unite to defeat Trump.

Thus, both parties at this point have provided a clear message, strategy, and vision — and voters appear to understand the stark differences between Trump and Biden.

In essence, the two parties’ differing platforms can be summed up as follows:

At the Democratic Convention, Biden made the case that “character,” “compassion,” “decency,” and “democracy” are on the ballot.

At the Republican Convention, Vice President Mike Pence made the case that “our economic recovery” and “law and order” are on the ballot. Trump reinforced these points.

Biden is still the favorite to win in November, as he currently leads by approximately 7 points nationally in opinion polls, according to the RealClear Politics average.

However, there is still undeniably a path for Trump to win the election if the economy picks up, if we get a coronavirus vaccine before Election Day, and if urban unrest continues.

Republicans undeniably benefit from the current unrest, as this lends credence to their “law-and-order” message — especially as several far-left Democratic lawmakers refuse to unequivocally denounce the riots and lawlessness.

However, at this point, it is unclear whether Trump and the Republicans’ law-and-order tactic, which is reminiscent of President Richard Nixon’s appeal to the “silent majority” in the 1968 and 1972 elections, will attract new supporters to Trump’s campaign, or whether it will move the suburban voters to whom the message is directed.

Further, while a good case can be made for the strength of the American economy before the coronavirus pandemic, voters are more concerned with the weak economy and high unemployment rate in the nation today than they are with the strong economy we enjoyed six months ago.

Trump cannot erase the fact that more than 180,000 Americans have died as a result of the coronavirus pandemic and that the deaths are increasing every day. And millions of jobs have been lost, with many never coming back.

Biden didn’t see his support rise in polls following the Democratic Convention last week, but maintains his lead over Trump for now. However, it’s very likely that after the four-day Republican Convention the race will tighten, with Trump seeing his support increase.

Trump's strong performance Thursday and an overall successful Republican Convention make me believe the race for the White House will be much closer than most people are predicting.