Ohio Democratic Rep. Tim Ryan could be forgiven if he wanted to break with early parts of President Joe Biden’s agenda.

Ryan’s Youngstown-centric district went through a political transformation over the course of the last decade, going from safely Democratic to a place where Biden defeated Republican Donald Trump by just 4 percentage points in 2020. Furthermore, Ryan is “looking very, very closely” at entering the race for Ohio’s open Senate seat, putting himself in front of a solidly pro-Trump electorate in 2022.

But Ryan didn’t hesitate when asked what Democrats should do next after the passage of a $1.9 trillion coronavirus relief package.

“Double down,” he told HuffPost in an interview last week. “Double down on working families.”

Across the country, Democrats are uniformly lining up behind the most essential parts of Biden’s policy program, aggressively trying to sell the already-passed American Rescue Plan ― which sent $1,400 checks to most Americans and  which Democrats say will help crush the coronavirus pandemic and reopen schools ― with Biden himself embracing a prediction of 6% economic growth at his press conference last week.

They are eagerly anticipating his next legislative proposal, which Biden is expected to lay out in a speech in Pittsburgh this week. Early reports indicate the more than $3 trillion package will contain hundreds of billions in infrastructure spending, a permanent expansion of the child tax credit, free community college, aid for caregivers, and a package of tax increases on wealthy Americans and corporations.

Driving this party-wide political bet is a conviction that robust economic liberalism can renew Americans’ faith in their government, give them a political advantage on economic issues and stem continued defections among working-class voters of all races to a GOP almost exclusively focused on culture war issues.

“We’re going to keep building until every American has that peace of mind and to show that our government can fulfill its most essential purpose: to care for and protect the American people,” Biden said Tuesday during an event at Ohio State University in Columbus, with Ryan in attendance. “When we work together, we can do big things, important things, necessary things.”

Ryan said the relief package amounted to a “huge sigh of collective relief” in his district ― not only because of the checks but also because of rental assistance and aid to restaurants and music venues.

“I think people are starting to get confidence in the government again,” Ryan said. “You can already feel a lot of voters saying, ‘I didn’t vote for Biden, but I appreciate what he’s doing.’ And if we keep going down this road, a lot of these people are going to approve of it.”

It’s the hope of Ryan and other Democrats that many of those voters are members of the working class. While Democrats made gains with college-educated voters during the Trump era sufficient to gain total control of the federal government, Republicans’ continued gains among voters without higher education ― including substantial gains among Latino and Hispanic voters in 2020 ― threaten the party’s viability in crucial states and districts. (American politics’ bias toward rural states and regions gives voters without college diplomas disproportionate political power.)

This growing educational gap threatens Democrats like Ryan, who represents a district where just 21% of the population has a college degree, and Nevada Rep. Steven Horsford, who represents a swing district that starts in Las Vegas’ northern suburbs and stretches out to the state’s rural center. Just 20% of his constituents have a college degree, and the pandemic has slammed Las Vegas’ tourism and hospitality industries, giving Nevada the second-highest unemployment rate in the country. 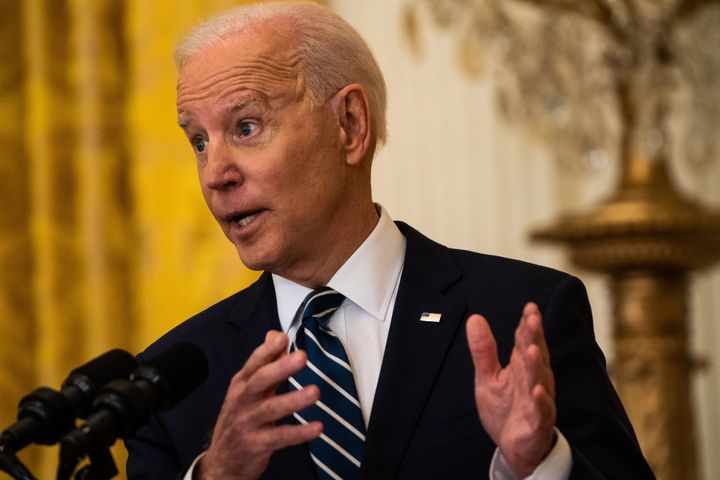 Ahead of a visit to the state from Vice President Kamala Harris last week, Horsford was able to list residents in his district whom the package would help, from a laid-off hospitality worker who could afford health insurance under expanded COBRA benefits to a single mother of two who said the COVID-19 relief check would help her afford diapers.

“We don’t have to talk about it,” Horsford said, noting constituents have approached him and shown him on their phone that the stimulus money was directly deposited into their account. “It’s here.”

Chuck Rocha, a Democratic consultant who has often been critical of the party’s outreach to Latinos, said the coronavirus relief package was more important to winning over Latino voters than any of Biden’s early moves to reverse Trump’s hard-line immigration policies.

“The biggest thing Joe Biden did is to secure a better chance at winning more of the Latino vote was to get that bill passed and send everybody checks last week,” Rocha, who worked for Vermont Sen. Bernie Sanders’ presidential campaign and now runs Nuestro PAC, told reporters in a briefing this week. “That was a huge deal.”

The COVID-19 relief package passed with relatively little legislative rancor. While West Virginia Sen. Joe Manchin and other moderate members of the Senate Democratic caucus pushed for narrowly targeting checks and unemployment assistance, the core goals and broad strokes of the legislation never became a heated topic of intraparty debate. Only one Democratic member of Congress ― Rep. Jared Golden of Maine ― voted against final passage of the legislation.

The proposal Biden plans to unveil this week could generate more intraparty dissent. House and Senate Democrats have pushed Biden to include a wide variety of policies, from spending trillions on climate infrastructure to a pathway to citizenship for undocumented immigrants, that may not make it into the final package. And the tax hikes on the wealthy and corporations could meet additional resistance from Democratic moderates.

Matt Morrison, the executive director of Working America, the organizing arm of the AFL-CIO, said a fight over taxing the rich would benefit Democrats by highlighting the GOP’s loyalty to the wealthiest Americans.

“Hell, yes,” Morrison said when asked if Democrats should push tax hikes on the wealthy. “Democrats should run, not walk, to this fight. Working people are not fools. They know Jeff Bezos got $70 billion richer during this pandemic.”

Polling conducted for Priorities USA, a major Democratic super PAC, found persuadable voters were split on which party they could trust more on the economy. But the poll also found swing voters already believed Republicans were “the party of the rich” and were more concerned with large corporations not paying their fair share in taxes than they were with high taxes hurting economic growth.

The GOP’s plan to counteract Democrats’ economic message is to respond with cultural ones on topics both frivolous (Dr. Seuss books no longer being printed) and serious (the ongoing crisis on the U.S.-Mexico border).

Nearly half of the Senate Republican Conference traveled to the U.S.-Mexico border this weekend in an effort to highlight the Biden administration’s struggles to handle a surge of migrants, and Trump has said he plans to make a similar trip soon. Discussion of the border dominated Biden’s Thursday press conference, when he did not face a single question directly relating to the pandemic.

“Thousands and thousands of people are coming up right now as we speak,” Trump said in a Fox News interview on Saturday night. “And you’re going to have millions of people pouring into our country. And it’s going to destroy our country.” (There was a similar surge in migrants in 2019, when Trump was still president.)

While many Democrats are skeptical of any effort to make issues other than the coronavirus pandemic and the economy central to political messaging, one senior party strategist is warning the party cannot afford to ignore the GOP’s cultural attacks on immigration, crime and other hot-button issues over the long term.

“The potential vulnerabilities for Democrats are obvious,” Ruy Teixeira, a senior fellow at the Center for American Progress, wrote last week. “This will act as a counterweight to Democrats’ attempt to dominate the political center and reap the dividends of successful economic management.”

For now, however, optimism remains the dominant mood in the party.

“Obviously, any midterm is going to be a challenge,” said Rep. Brendan Boyle (D-Pa.), referring to the long-term historical trend of the party in power losing seats during midterm elections. “I think what we’re doing now, frankly, gives us the best possible chance.”