President Donald Trump said Wednesday that the expansion of mail-in voting during the coronavirus pandemic is a “scam” and that he needs the Senate to confirm his Supreme Court pick to replace the late Justice Ruth Bader Ginsburg before the election. And he was open about why: Trump wants a new justice in place to ensure election-related cases are decided in his favor.

“I think this will end up in the Supreme Court, and I think it’s very important to have nine justices,” Trump said.

This is an extension of Trump’s earlier suggestion that he is “counting on the federal court system” to decide the winner of the presidential election in his favor.

“Now we’re counting on the federal court system to make it so that we can actually have an evening where we know who wins. Not where the votes are going to be counted a week later or two weeks later,” Trump said at a campaign rally in North Carolina on Saturday, one day after Ginsburg’s death.

The substance of Trump’s statements is clear. He wants to stop states from counting legitimate votes on Nov. 3, and he intends to file a challenge in the courts to do this. He is now saying that his nominee needs to be seated on the court in order to rule in his favor, stop the counting of legitimately cast ballots and hand him a second term.

“Donald Trump isn’t just trying to steal a Supreme Court seat ― he’s trying to steal the election along with it,” Brian Fallon, executive director of Demand Justice, a progressive judicial group, said in a statement. “Even though Republicans may claim to already have the votes to confirm Trump’s pick, Democrats cannot afford to compartmentalize this Supreme Court fight because the fate of the election itself may ride on it.”

A postelection Trump court challenge could be a wilder sequel of Bush v. Gore. It could look like the Pennsylvania state Republican legislative caucus petitioning the U.S. Supreme Court to reject the Pennsylvania Supreme Court’s Sept. 17 ruling extending the absentee ballot receipt deadline to three days after the election for ballots that were postmarked by Election Day. There are similar appeals working their way through the judicial system in states including Georgia and Michigan.

In every election held across the country, vote counting continues after election day in order to process all mail-in and provisional ballots, and as ballots and vote tallies are canvassed for any errors or miscounts. 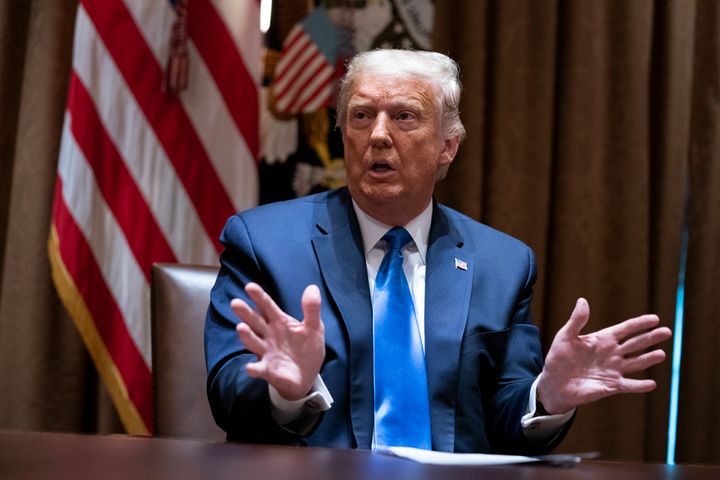 The number of ballots that are counted after Election Day have increased since the 2000 election as more states have expanded absentee and mail-in voting by eliminating the need for an excuse to vote absentee, extending the ballot receipt deadline to ensure no one is accidentally disenfranchised by a delay in the mail and to provide a process for voters to fix minor errors on their ballots.

As the pandemic pushes more Americans to cast a record number of mail-in ballots to avoid the risk of contracting the coronavirus, election officials state that it will take longer to count the expected crush of ballots. This is particularly true in states that do not allow officials to canvass or count ballots before Election Day.

But instead of trying to make the election process work smoothly, Trump has attacked it in order to sow doubt among his supporters that the election will be fair. He calls it “unfair” to mail ballots to voters. He claims, without evidence, that the 2020 election will be “INACCURATE & FRAUDULENT,” and “the most rigged election in history.” And he says he cannot lose unless the vote is rigged.

“The only way [Democrats] can win is to cheat, in my opinion,” he said, baselessly, during a Fox Sports Radio interview on Sept. 17.

Trump’s effort to rush the confirmation of a new Supreme Court justice in record time in order to rule on a challenge he brings to the election could help him set in motion a nightmare scenario in which Republicans empowered in swing states with divided governments reject the results of the election and declare Trump the winner. His campaign has already discussed this possibility with Republicans in Pennsylvania, according to The Atlantic.

Though Trump won election in 2016 while losing the popular vote, his attempt to secure another Supreme Court justice who he thinks will help him stop states from counting votes could help him stay in power even if the final vote count shows him losing the Electoral College.

And with Trump under investigation in New York state courts for tax fraud, among other things, he may be looking for any means to remain in office because the presidency confers certain, if potentially dubious, constitutional protections against investigation and incarceration.

Related News:
Business News:
Common App CEO on pandemic's impact on first-generation students: 'Our worst fears have been realized'
Covid cases are exploding across U.S. and Thanksgiving could be an 'accelerator event'
How this Chick-fil-A Operator aims to change the world – one chicken sandwich at a time
Another record low mortgage rate just caused demand to jump for both refinances and home purchases
Singapore Oil Tycoon Who Founded Hin Leong Denies HSBC’s Forgery Claim
Recent Posts
This website uses cookies to improve your user experience and to provide you with advertisements that are relevant to your interests. By continuing to browse the site you are agreeing to our use of cookies.Ok