Low interest rates and a property market recovery have coincided with a rebound in the share prices of real estate listing groups Domain and REA as the two players look for opportunities to grow their businesses.

In the last few weeks Domain’s shares have climbed to a record high of $4.65 and News Corp-owned REA’s hit $154.30 in early January.

As half-year results approach and property listings continue to improve, Domain and REA Group will look at ways to grow their businesses and alternative revenue streams could be key. 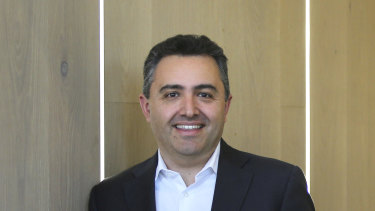 Domain boss Jason Pellegrino is looking at acquisitions as a way to grow the property listing portal’s revenue.Credit:James Alcock

Media industry sources familiar with Domain’s strategy have said the company is about to make a $100 million strategic investment in a sign it is looking to diversify its revenue. It is unclear which company is it looking to buy a stake in but industry sources have suggested it could be surveying business GlobalX or home loan broker Lendi (Domain currently has a joint venture with Lendi).

Domain announced plans in November to cut almost 12 per cent in costs in the first half of the new financial year as it warned the spring selling season was weaker than previous years.

The real-estate listings company scrapped its dividend at last year’s results after factors related to the coronavirus pandemic hit the company’s bottom line. Domain swung to a $227 million loss for the 2019-2020 financial year, dragged down by a major write-down of its digital division.

Growing Domain’s revenue was a key priority for this year under outgoing Nine Entertainment Co chief executive Hugh Marks. Nine, which owns this masthead, has a 60 per cent stake in Domain.

“We’ve got an interest in Domain – that’s a growth business,” Mr Marks told The Sydney Morning Herald and The Age following his resignation. “That marketplace area is another opportunity for the next leader to build upon. That would have been the next thing I would have gone on with.”

In its latest results REA Group reported revenue after broker commissions of $195.7 million, down 3 per cent on the previous corresponding period while earnings before interest, taxes, depreciation, and amortisation increased 8 per cent to $123.8 million. The real estate listing group’s chief executive Owen Wilson said at the time that low interest rates would provide certainty about the cost of borrowing, which would help the market.

“COVID won’t be the major influence next year assuming we don’t have a relapse in Australia,” he said.

“The bigger impact will be consumer confidence and employment – a COVID hangover. These are two factors that will play a bigger part in property market performance next year,” Mr Wilson said.