The Star Entertainment Group investors say it’s too early for heads to roll at the gaming giant, despite more than $1 billion in market value being torched following allegations it turned a blind eye to money laundering.

ASX-listed Star Entertainment Group’s share price has fallen by more than 25 per cent this week after The Age, Sydney Morning Herald and 60 Minutes published damning allegations the casino had cultivated high-roller gamblers allegedly associated with criminal or foreign-influence operations since 2014. 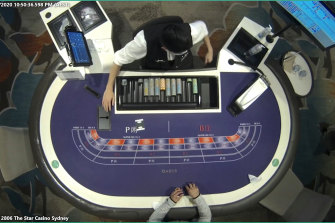 Star released an announcement to the ASX on Monday morning claiming the reports were “misleading” but failed to provide further information, causing investors to sell the stock. The company’s market capitalisation was about $4 billion at market close on Friday and closed on Tuesday at $3 billion. Star shares slumped 2.7 per cent on Tuesday to close at $3.21.

Investors said they had been especially disappointed by the reports, given that Star’s management had made repeated assurances that there were strong risk controls at its casinos.

One fund manager, who declined to be named because they were exposed to losses, said it had been a “pretty tough week” after the revelations came the same week Sydney ended its two-month lockdown, which was expected to boost The Star casino’s profits.

“You were waiting on the reopening then you get clobbered with that news,” he said. “It’s disappointing because it will create an air of uncertainty for quite some time. It could drag on for a while.”

The investor added analysts had considered Star “might not be immune” to compliance failures due to the high-risk nature of the gambling industry, as exposed by rival operator Crown Resorts, but management had consistently assured shareholders there were strong controls in place.

“They try to portray themselves as being squeaky clean in comparison to Crown, undoubtedly it’s a bit of a nature of the industry. When we’ve spoken to them, they’ve been adamant they are investing heavily in compliance, risk and stuff.”

Another Star investor, who also de]clined to be named because they were active in the market on Tuesday, said they expected the stock would continue to fall for “a couple more days” but it was too early for directors to resign.

“You need to wait for the recommendations of the review to conclude, see what ILGA [Independent Liquor & Gaming Authority] says and if there has been malfeasance from the guys, they will step down,” he said. “But at this point, they’re steadfastly denying the majority of the allegations.

“[Although] if you compare the response of Crown versus Star, Crown came out denied, denied, denied and then that all got refuted … Star will remain in limbo for a period of time.”

Pengana chief investment officer Rhett Kessler, who does not hold stock in Star, said shareholders were right to be disappointed by the news. “It’s fraught with difficulty, no one really knows what’s going on at the moment,” he said.

“I would imagine people who are shareholders based their view to a large extent on them being the clean guys, the good guys. That’s blown up in their face.”

Mr Kessler added the revelations were also a negative for rival Crown because it would delay or destroy merger discussions between the two companies. “Star was going to bring good management, squeaky clean management to the party.”

He said the increased scrutiny on casino compliance has led to a “rebasing” of what is considered a sustainable level of long-term gaming revenue both in Victoria and NSW, but added profits could increase once COVID-19 restrictions are lifted around the country.

Swinburne Law School senior lecturer and corporate governance expert Helen Bird said, “denial is almost a reflex defence” that could actually worsen Star’s position if the allegations are proven to be substantiated.

“As a company you’re entitled to say there’s nothing in it. That’s the approach Crown took at the start of this conundrum and it led nowhere, to a disaster, in fact, a greater public relations disaster when the full story came out.”

Ms Bird agreed it was too early for directors or executives to resign, as this might further destabilise the business, but added companies in crisis often call for an internal review to signal they’re taking the matter seriously.

“There’s always a reluctance to shoot someone in the foot before they’re certain they’re the ones who are responsible,” she said. “[But] there’s a lack of confidence in the company at this particular point.”

Ms Bird added Star’s response had created an information vacuum that would only cause further share price destruction. “If I were Star, I’d be coming out on the front foot and really attacking this. The fact they’re remaining silent opens up rumour and speculation about what’s going on.

“That vacuum is a reflection of the crisis inside the company,” she said. “But no crisis is managed by silence.”