Campaigners say women born in the 1950s have been treated unfairly after the pension age was changed from 60 to 66. But Court of Appeal judges yesterday ruled that up to four million women had not been discriminated against when their state pension age was altered to be in line with men. Dr Davina Lloyd, of the Back To 60 campaign group, spoke out after judges dealt the devastating blow to their fight for compensation and a reinstatement of the retirement age to 60.

She told the Daily Express: “Without question these women have been discriminated against. No prior impact assessments were done prior to the changes in pension age being made to see what the outcomes would be.

“During their working lives this group of women were unable to build up a separate pension in their own right.

“One hundred years since women were given the right to vote we still do not have true equality.”

Campaigners said many women have lost thousands of pounds worth of pension funds and have been forced to stay in work for longer because they cannot afford to retire.

They argued that the change discriminated against 3.8 million people, leaving them £47,000 out of pocket. 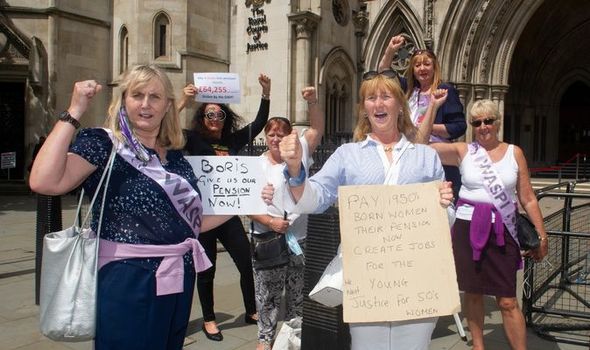 Julie Delve, 62, and Karen Glynn, 63, brought the challenge after losing a landmark High Court fight against the Department for Work and Pensions last year.

At a remote hearing in July, the Court of Appeal was told Ms Delve expected to receive her state pension at 60 in 2018 but, as a result of the changes, she will not receive it until she is 66 in 2024.

The women put the case that raising their pension age was unlawful as it discriminated against them on the grounds of age and sex, and that they were not given adequate notice of the changes.

But in a judgment published yesterday Sir Terence Etherton, Lord Justice Underhill and Lady Justice Rose unanimously dismissed the women’s claim. They found that introducing the same state pension age for men and women did not amount to unlawful discrimination under either EU or human rights laws.

Joanne Welch, founder of the Back To 60 campaign, said the group’s legal team is “actively looking” at taking the case to the Supreme Court.

She said: “This isn’t over by any means. The decision is unconscionable and there is no doubt in our minds that it’s discrimination.”

Until 2010, women were entitled to receive the state pension from the age of 60.

The Government announced in 1995 that this would gradually increase to the age of 65 to bring it into line with men. Both ages now rise in tandem.

Former pensions minister Ros Altmann said: “When I was pensions minister, I saw copies of letters written by the Government to millions of these women about their state pension, which failed to clearly highlight that their pension would not be paid at age 60.

“This looks like maladministration. This careless approach to an issue that is so vital to many women was rather surprising.” 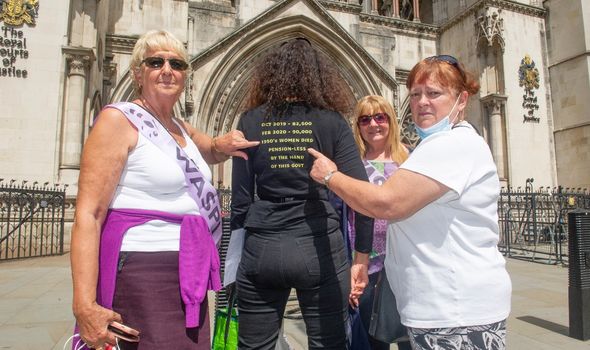 Helen Morrissey, pension specialist at finance firm Royal London, said: “There have been well-known flaws in how these changes were communicated and a group of women have faced severe financial hardship as a result.”

A Department for Work and Pensions spokesman said: “Both the High Court and Court of Appeal have supported the actions of the DWP, finding we acted entirely lawfully and did not discriminate on any grounds.

“The claimants argued that they were not given adequate notice.

“We are pleased the court decided that due notice was given and the claimants’ arguments must fail.”

This judgment is a travesty of justice but not unexpected given the misogynist state of our society and our Government.

We are very grateful for the tireless work of our legal team led by Michael Mansfield who saw this as discrimination.

Every independent witness has also been able to see that the treatment of 1950s women over their pensions is discrimination.

At the very first hearing of the case the women were given leave to proceed on all counts.

Prime Minister Boris Johnson, when he was in electioneering mode, said he would look at the issue with new eyes and new vigour but he has yet to live up to his word. Keir Starmer has also said that he supports the 1950s women.

Yet, despite this, the Department for Work and Pensions has spent millions of pounds of taxpayers money taking these women to court.

Two external reports on our government, the report of the Special Rapporteur on Poverty, Prof Philip Alston, and the report of the UN CEDAW Committee (The Convention on the Elimination of all forms of Discrimination against Women) in 2019 both condemned the UK government for its treatment of women in general and 1950s women in particular.

Professor Alston said that the treatment of the 1950s women over their pensions was “unconscionable” and he called the Government misogynist.

The CEDAW committee is currently considering “grave and systemic evidence” against the UK Government for its treatment of the 1950s women.

Without question these women have been discriminated against.

No prior impact assessments were done prior to the changes in pension age to see what the outcomes would be.

And the fact that during their working lives this group of women were unable to build up a separate pension in their own right means that the average 1950s woman retires on about 20 percent of the pension pot of the average 1950s man.

As governments were taking away pensions from 1950s women and making them wait up to six additional years, they were paying for 35 years (up to 2018) the National Insurance contributions for 9.8 million men allowing them to retire at 60 if they so wished!

One hundred years since women were given the right to vote, we still do not have true equality.

Davina Lloyd is Back to 60’s UN representative