Americans are cheering the Monday news that Moderna’s COVID-19 vaccine is 94.5 percent effective. Release from Corona Federal Prison seems just around the corner.

But Gov. Andrew Cuomo, D-N.Y., probably is pouting. Turning lemonade back into lemons, he could not have been sourer about last week’s magnificent COVID-19 update.

“The good news is that the Pfizer tests looks good and we’ll have a vaccine shortly,” Cuomo told George Stephanopoulos, host of ABC’s “Good Morning America.”

Pfizer’s immunization seems to be 90 percent effective and could reach Americans in December. “The bad news is that it’s about two months before Joe Biden takes over, and that means this administration is going to be implementing a vaccine plan.”

TUCKER CARLSON: THE ELITES WANT COVID-19 LOCKDOWNS TO USHER IN A 'GREAT RESET' AND THAT SHOULD TERRIFY YOU

Slamming the president by name, Cuomo continued: “When you deny a problem the way Trump did, you can never solve it and that’s true in life. The Trump administration denied COVID, so they were never ready for it. There was no mobilization of the government.”

Cuomo Chameleon has become one of President Donald J. Trump’s most rabid China-virus critics. But Cuomo’s colors were completely different as the pandemic raged earlier this year. Cuomo’s comments about President Trump’s crisis response were as iridescent then as they are pitch-black now. 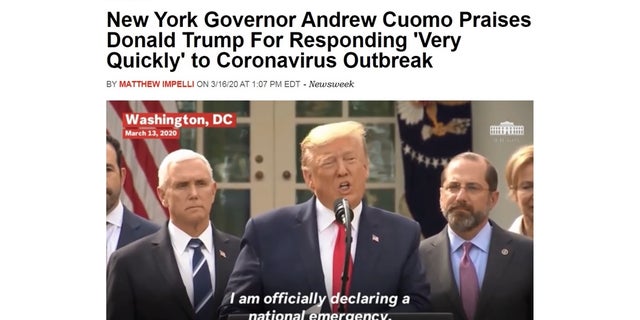 -“Fairness dictates that kudos where kudos are due, and here the vice president and the president responded very quickly. So, I want to thank them for that,” Cuomo said March 16, as a “Fox & Friends” montage reminded viewers last Saturday.

-“I want to thank the president of the United States, President Trump, who mobilized this effort, and he did it with all rapid speed,” Cuomo said March 30, as the U.S. Navy’s newly refurbished USNS Comfort steamed up the Hudson, moored at Manhattan’s Pier 88, and opened its 1,000 hospital beds to sick New Yorkers.

-“He has been good in delivering for New York,” Cuomo told radio host Howard Stern about Trump on April 13. “He has delivered for New York.”

“I’ll tell you, he’s been amazingly accessible,” Cuomo elaborated. “Either he gets on the phone, or he calls me back in 10 minutes.”

“The president always makes a point of saying to me ‘How is Chris? Is he doing OK?’ And that’s not in his usual character. We’re not chit-chatty on the phone.”

-Cuomo predicted March 24 that New York State would require a vertiginous 30,000 ventilators. This crisis never happened. President Trump rallied private companies to build these life-saving devices. They boosted output and manufactured 11,327 units within weeks. They soon became so abundant that Cuomo declared via Twitter on April 15: “We will be sending 100 ventilators to Michigan and 50 ventilators to Maryland.”

-“Do I have faith in the president?” Cuomo asked April 19. “Look. What the federal government did, working with states, as I just said, was a phenomenal accomplishment. The federal government stepped up and was a great partner, and I am the first one to say it. We needed help and they were there.”

By contradicting his earlier encomia about President Trump, Cuomo has revealed his profound dishonesty and political opportunism. It also reflects Cuomo’s jaw-dropping ingratitude.

Rather than snore through this disaster, as Cuomo now fabricates, Team Trump surged medical and financial assistance to Cuomo and his constituents — and kept it flowing. Through November 11, the White House reports, these deliveries by the federal government and its private-sector partners have included, among much more:

This cornucopian assistance to New York is just a small sample of President Trump’s fabled “non-response” to COVID-19. Democrats relentlessly chant that Trump “did nothing” about COVID-19. Democrats either are lying or they believe that the ghost of Lyndon Johnson delivered these things and more:

-“My administration has invoked the Defense Production Act and related authorities over 100 times” to create anti-COVID equipment and materials, President Trump stated Friday.

-The FDA has granted 287 emergency-use authorizations for test kits, including 57 antibody tests and seven antigen assays.

-FEMA has made 30,458 medical-supply deliveries to all 15,400 Medicaid- and Medicare-certified nursing homes in all 50 states. One hundred percent of scheduled shipments were completed.

-151,320 ventilators now fill the previously depleted Strategic National Stockpile. “Every American who needed a ventilator has had access to a ventilator,” President Trump said Friday. “Every single request has been immediately filled.”

And what of the vaccine headlines that triggered Cuomo? Pfizer’s, Moderna’s, and additional immunizations from Astra Zeneca, Eli Lilly, Johnson & Johnson, and possibly other laboratories are nearing American arms, just eight months since COVID-19 invaded.

America is fortunate to be served by a bold president who rides people hard, demands more of them and their institutions, rarely takes no for an answer, barely sleeps, and then does likewise the next day.

If President Trump’s legal challenges, recounts, and severely vital vote audits somehow earn him a second term, Americans will be luckier than they know to benefit from four more years of his tough-but-industrious leadership.

The alternative is a White House filled with Democrat incompetents and ingrates — just like Andrew Cuomo.