(CNN)TikTok posts about actor Johnny Depp’s defamation trial against his ex-wife, actress Amber Heard, have turned a stay-at-home mom based in Scotland into an accidental influencer. Or, perhaps more aptly, a DeppTok influencer.

Sophie Doggett, whose TikTok was previously populated by videos on everyday things such as herself or her pets, posted to her TikTok account on April 25 a clip of Heard’s lawyer asking a question of a witness and then immediately objecting to the response. It is one of many moments in the trial that has been seized upon by people like Doggett, as clips of testimony and references to the case have pervaded TikTok in a way that no trial has before. That’s partly because the proceeding, set to resume Monday, is being livestreamed during the age of TikTok, and also because of the high-profile celebrities the case involves.
Doggett, who paired the clip to playful music, said she gained 30,000 followers seemingly overnight from the post which has, to date, been viewed more than 5 million times. Asked about her follower count before the viral post, she says it was 6,668, a number she recites by heart. In the three weeks since the post, she’s collected more than 25,000 additional followers. Her account is now dedicated to Depp-related posts, some of which pertain to the trial, others to past Depp films or interviews. The top three posts pinned to Doggett’s account have more than 14 million collective views.

If there’s any question of where her loyalty lies, it is with Depp, something that’s conveyed through the photo associated with her TikTok account — white text against a black background that reads “Justice for Johnny Depp.”

Inside the courtroom, jurors are tasked with determining whether Depp was falsely and maliciously accused of domestic abuse by Heard, which he claims cost him an estimated $50 million in damages associated with lost acting jobs. The case stems from a 2018 opinion piece published in The Washington Post wherein Heard described herself as “a public figure representing domestic abuse.” Although Depp is not named in the piece, Heard refers to the year 2016, a year in which she filed for a divorce and obtained a temporary restraining order against Depp, claiming she’d been abused. 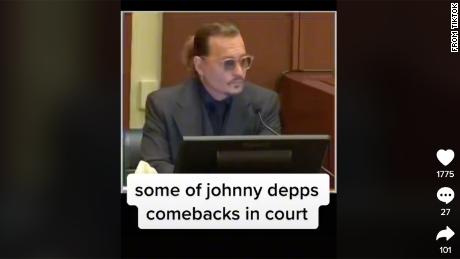 Depp denied the allegations then, as he does now, and the two reached a divorce settlement that year, issuing a joint statement at the time. During his testimony, Depp alleged he was physically and verbally abused by Heard and denied accusations that he was physically violent toward her. Heard has countersued Depp for $100 million, claiming statements his team made were damaging to her career
Online, however, everyone from everyday users like Doggett — who said she is now able to monetize her posts through TikTok’s creator fund due to the attention — to legal analysts, lifestyle influencers, activists of varying pursuits, and comedians are taking it upon themselves to dissect and analyze every minute detail of the trial, down to conspiracy theories about the way in which Heard dabbed her nose with a tissue.

Emily D. Baker, a former LA deputy district attorney turned online creator, streams live legal commentary of the trial proceedings on her YouTube page, which has more than 330,000 subscribers. Her viewers increasingly request for her to respond to theories or footage they have seen on TikTok, she says.
“When you have cameras streaming in the courtroom, people are going to clock every strange behavior. And they have,” said Baker. 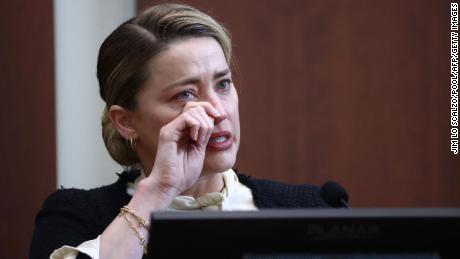 Many are in the comment sections on YouTube channels to cheer Depp or jeer Heard — typically in that order. Others have set up their own video broadcasts to provide ongoing commentary of the trial in real-time or devoted Instagram accounts to posting updates on the case. Perhaps most striking — because of the way in which the platform operates and how users take to it — is TikTok.
Like Doggett, two other TikTok users CNN Business spoke with recounted similar stories of going from hundreds or thousands of followers to tens of thousands of followers in a matter of days due to Depp-related posts.
One TikTok user, who is based in the UK, said she posted a video on April 27 celebrating Depp for freeing his lawyer’s snagged charger cord with a comment, “the little things.” “I wasn’t expecting anyone to reach out, or like it, or share it even,” she said, noting that she’d originally created her account to post about films. But it has since garnered more than 10 million views. She’s continued posting about the trial and she says her account has gone from fewer than 300 followers to more than 50,000.
Maria Pugsley, also based in the UK, similarly told CNN Business that followers to her account grew from fewer than 10,000 to more than 37,000. Previously, she said her use of TikTok included “jumping on the trends, really and having a bit of a laugh — it never really took off to be honest.”
But users have taken to her commentary on the trial, in which she favors Depp and has spoken about male victims of abuse. “In the beginning I went in very unbiased — all of my opinions are based on the courtroom,” she said, adding: “I am always open to having my opinion changed.”

A high-profile trial, dissected on TikTok

TikTok’s algorithm has been repeatedly reported upon as scary-good in its manner of feeding users more and more posts pertaining to their interests. One has to look no further than the hashtags on TikTok to gauge that sentiment there sways favorable toward the 58-year-old Depp, undoubtedly the bigger celebrity with a much longer history cultivating a fanbase compared to 36-year-old Heard. Doggett noted that she hadn’t personally come across posts on TikTok in support of Heard: “Maybe a couple people [in comments sections] saying ‘Team Amber.’ They get destroyed in the comments.”
One hashtag, #JusticeForJohnnyDepp, has garnered more than 11 billion views globally, while just the actor’s name has more than 19 billion, and #JohnnyDeppisInnocent has garnered more than 3 billion. Users are applying filters to their faces to personify Depp, combining clips of testimonies with past footage from Depp’s film archives. By contrast, #JusticeForAmberHeard has 41 million views. Heard’s name has garnered more than 9 billion views and #AmberTurd has 1.6 billion (a hashtag fueled by trial testimony concerning fecal matter.) Meanwhile, the #AmberHeardIsALiar had drawn more than 2 billion views when CNN Business reviewed it Friday afternoon, but the hashtag no longer appeared viewable in the app as of Friday evening. 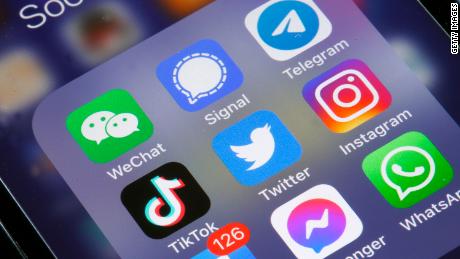 “What you’re seeing is fan base versus fan base,” Juda Engelmayer, a public relations professional who has worked with high-profile figures, such as disgraced Hollywood producer Harvey Weinstein who was convicted for sex crimes, and is currently working with the fake heiress Anna Sorokin. “It was surprising to me that the social media throngs and supporters are almost entirely backing him.”
The passionate social media posts surrounding the case are, at times, rooted in other factors. Some see outsized support for Depp, and the dismissal of Heard’s allegations, as another example of internalized misogyny. Others, including men’s rights activists, have lifted up Depp in online forums as a rare well-known man who alleges he experienced domestic abuse at the hands of a woman, thereby bringing light to the issue.
According to Daniel Klug, a systems scientist at Carnegie Mellon University’s Institute for Software Research who has researched TikTok’s algorithm, “TikTok creates a sort of mediated reality for the user.”
“Over a time period, you see a lot of short videos … depending on what kind of content you see, let’s say a lot of content about the trial, that creates a certain perception of the reality of the trial for you on TikTok,” he said, noting that posts tends to fall into two categories: those that capture testimonies from Heard, Depp, or others on the stand “describing very personal and intimate and weird details of their relationship,” or content related to Depp or the trial that is “remixed or reinterpreted by other users.”
Callum Hood, head of research at the Center for Countering Digital Hate which recently investigated abuse directed at several high-profile women, including Heard, on Instagram similarly noted that the nature of TikTok is such that “you get very, very slim segments of the trial presented and usually with a very heavy skew.” 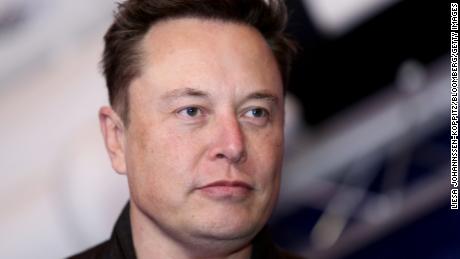 “This applies as much to [content posted about] Ukraine as clips of the Amber Heard, Johnny Depp trial,” said Hood, noting that “content on TikTok, more so than any other platform, is free of context … We tend to know less about the account that’s posting it, less about when it was posted, less about where the material is from, about the motivations of the person posting it … I’ve got a lot of sympathy for the users because it is genuinely very hard, with the information available to you in the app, to understand the context and to make an assessment of how true or false it is.”
Center for Countering Digital Hate’s report noted that discussions of Depp and Heard’s legal battles on social media “often contain abuse towards Heard, as well as the promotion of conspiracy theories around the rate of women’s false allegations of domestic abuse.”
Trial-related content on TikTok varies from those who are analyzing and conspiracy theorizing to attempts to poke fun, which can quickly become distasteful. One popular variation of posts is based on satirical reenactments using audio from Heard’s testimony, in which she said, “I was walking out of the bedroom, [he] slapped me across the face and I turned to look at him and I said, ‘Johnny, you hit me. You just hit me.'” One widely-shared post, featured a cat role playing the former couple. It wears a blond wig when playing the part of Heard and a paper mustache and bandana when playing the part of Depp. While the original post is no longer viewable, it had been “dueted” by other accounts — a TikTok feature that enables users to post a video side-by-side one from another user in order to react to it — which can still be found on the platform.
For its part, TikTok said it removes content that violates its policies, which include “threats or degrading statements intended to mock, humiliate, embarrass, intimidate, or hurt an individual.” There may be some leeway in the case of Heard and Depp, as its community guidelines note that “critical comments of public figures may be allowed; however, serious abusive behavior against public figures is prohibited.”

“I believe I was mass reported over political differences”

There are also questions about whether and how others on the platform may be able to silence certain voices or opinions.
One TikTok user named Ashley, who asked that her last name be withheld for privacy reasons, posted about how she felt some men’s rights activists were using the trial as an excuse to discredit allegations by women of abuse.

“Can you imagine the leeway every narcissistic woman-hating man is going to have now?” she said in the post. Ashley told CNN Business that the post was quickly “dueted” and she received threats in the comments, then her account was banned.
In a message on April 26, Ashley — who is based in Pittsburgh and had 7,000 followers — asked TikTok to restore her account, “I believe I was mass reported over political differences,” she wrote, adding that she had screenshots of threatening messages she had received. Asked about her account by CNN Business last week, TikTok said it would investigate it. Following that, the company restored her account but did not provide any details on why.
Source: Read Full Article