First came the rush on toilet paper, pasta and rice as shoppers stocked up on key grocery items during the early days of the pandemic. Then came the jigsaw puzzle and gym equipment shortages, and a run on computer monitors and laptops to prepare for months of working from home.

Since then, the changes in our shopping habits have continued behind the scenes, less pronounced than in the early days of the pandemic but just as significant. For example, Australian males may seem smellier than usual as they work from home as sales of men's deodorant are down 8.7 per cent since April. 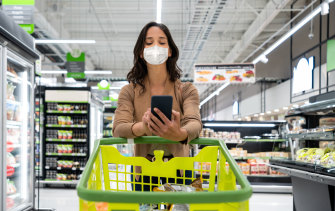 The COVID-19 pandemic has changed the way we shop, and what we buy.Credit:iStock

Similarly, spending on skincare is down, but sales of coffee machines have gone through the roof, and the humble white cask wine – a favourite of partying uni students – has been gathering dust on the back shelves of bottle shops.

It's no secret that as the coronavirus pandemic drastically changed how we live, it also changed how we shop. After all, with socialising either banned or heavily restricted, why bother trying to smell nice?

But while these may be temporary casualties brought about by a locked-down society, the heads of some of Australia's largest consumer companies are mulling what recent changes in behaviour might stay with us for good.

For Coles chief Steven Cain, the past six months have brought about the biggest change in consumer behaviour he's ever seen, not in just what customers are buying, but when and how they're shopping.

In August the supermarket giant's Victorian 'neighbourhood stores — larger-format stores typically located in the suburbs — saw 70 per cent more trade than usual, while inner-city locations were down 50 per cent.

Online grocery shopping has, predictably, boomed, and customers are starting to do their shopping during the middle of the week, rather than on the usual popular days of Sunday and Monday.

"Our busiest times are now very much in that 12pm to 3pm period, which is a sign people might not be getting up as early as they used to," Cain says. "Both very early shopping and very late shopping has gone down a bit."

The change in shopping habits and tastes has flowed through to beverages giant Coca-Cola Amatil, which has seen a home delivery pizza boom lift soft drink sales on the one hand, and the emergence of "ghost” vending machines on the other – vending machines in public places that no one uses anymore.

We’ve got 2000 [vending] machines that have not vended one unit in the last six weeks. So half of them are what we call ghost machines.

During the strictest of lockdowns, people have shopped at supermarkets less often, but have bought more. This has generated a swing towards buying more large, bulk-size packs. But there has been a downside – less visitation has meant a decline in sales of refrigerated drinks in supermarkets. 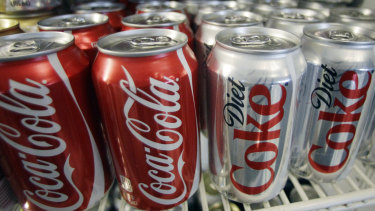 Some vending machines haven’t sold a single can of coke in weeks.Credit:AP

"On Friday nights and Saturday nights people are having a lot more pizza. In Melbourne, where people have been restricted, pizza has done really well,” he says. And sales of Amatil's drinks at pizza outlets have jumped in line with the double-digit jump in pizza demand, he says.

However, while take-away pizzas have delivered some fizz, many of Coca-Cola Amatil's Melbourne vending machines have gone deathly quiet.

"We’ve got 4000 machines [in the city] and we’ve got 2000 machines that have not vended one unit in the last six weeks. So half of them are what we call ghost machines, and that’s because no-one’s there,” West says.

West says he could look at a snapshot of his business and on the surface see a relatively stable result over a four-week period.

"The volatility that we’re managing is certainly unheralded for the food and beverage industry,” he says. 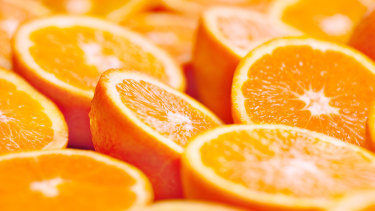 Coles chief Cain has also got significant mileage out of a rarely-used piece of supermarket jargon: 'scratch', referring to customers who make their own meals (eg from scratch) rather than opting for ready-made. Key ingredients such as flour and spices are up 20 per cent on last year.

It’s a similar story for fresh produce giant Costa Group, which has seen a 13 per cent rise in mushroom sales this year, which chief operating officer Sean Hallahan attributes to the boom in working from home, which has led to more home cooking. Demand is also up for tomatoes and oranges, the latter Hallahan links to customers opting for vitamin-rich food in a bid to stay healthy.

"Citrus is interesting, we’ve definitely seen a lot more demand and a lot higher pricing in citrus in Australia this year than we’ve seen historically. Prices are up something like 25 per cent,” he says.

Australia's newfound love for cooking is something Cain expects will persist long after the pandemic is over, along with a preference for online shopping.

"I think cooking skills being embedded is a fantastic thing for the future as they were skills that were being lost by the move to convenience," he says.

"Now people have learned to bake, I think those skills will stick around."

Hallahan views the crisis as having accelerated and "compressed" some of the trends already present in food retail, one of which being growing demand for pre-packaged produce.

Now people have learned to bake, I think those skills will stick around.

"We’ve run several consumer studies and what we know is that what consumers are concerned about now, which they didn’t used to be…is other people in the supermarket, who might have handled produce before them. So they’re definitely preferring pre-packaged items,” he says. 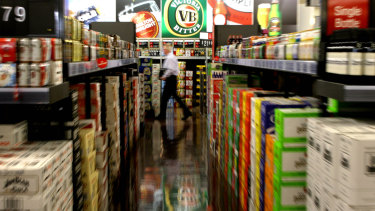 Fancier drops and craft beers have been all the rage this pandemic.Credit:Gabriele Charotte

Getting fancy with our grog

Treasury Wine chief marketing officer Angus Lilley says the company has seen strong retail sales during COVID-19 and solid growth in online sales. But on the other side of the ledger wine sales at restaurants and bars have been whacked by lockdowns that have curtailed the hospitality sector.

Lilley says the two key wine consumer trends during COVID-19 have been an increase in wine consumed at home with meals, and the rise in online sales.

"Wine has probably lagged a lot of other consumer categories in terms of the performance through online platforms. In the last two or three years we’ve seen that rectify and correct itself and accelerate. I think through the last six months, in the COVID period, we’ve seen that accelerate again,” he says.

Another thing that’s accelerated during COVID-19 is Treasury’s use of virtual wine tastings to reach consumers. Treasury has significantly increased these tastings, sometimes holding them weekly, with winemakers hosting sessions followed at home and abroad.

At Coles, sales of fancier products like craft beer, cream liqueurs, champagne and non-traditional wine varieties like Sangiovese have risen through August, while sales in imported beers and cask wine have declined.

But despite concerns from some health bodies that Australians are imbibing more during lockdown, Cain says data doesn't support this thesis.

"What we've seen is really a shift from drinking in pubs and clubs to drinking in your home," he says.

"But this era is defined by consumption, so I'd expect once things start to open up again we'll see things like Penfolds and the summertime ranges start to improve again."