Democrats have officially started the process of getting their nearly $2 trillion COVID-19 relief bill passed ― with or without Republicans’ support.

On Tuesday, Senate Democrats voted to advance a resolution that would allow for $1.9 trillion in new spending through a special process called budget reconciliation. Legislation passed through budget reconciliation only needs a simple majority to pass. Otherwise, Democrats would need to win the support of at least 10 Republicans in order to defeat a filibuster, which requires at least 60 votes to overcome.

With 50 seats in the Senate and Vice President Kamala Harris as the tie-breaking vote, Democrats won’t need Republican support if they choose to push their COVID-19 proposal through reconciliation.

The budget resolution came with instructions to pass up to $1.9 trillion in additional spending that Democrats say they want to put toward $1,400 checks, extending unemployment insurance programs currently set to expire in March through September, and increasing jobless benefits to $400 per week instead of the current $300. They also want to pass $350 billion in funding for states, cities and tribes, as well as funds for vaccines, schools, public transit and more.

“With this budget resolution, the Democratic Congress is paving the way for the landmark Biden-Harris coronavirus package that will crush the virus and deliver real relief to families and communities in need,” Senate Majority Leader Chuck Schumer (D-N.Y.) and House Speaker Nancy Pelosi (D-Calif.) said in a joint statement. “We are hopeful that Republicans will work in a bipartisan manner to support assistance for their communities, but the American people cannot afford any more delays and the Congress must act to prevent more needless suffering.” 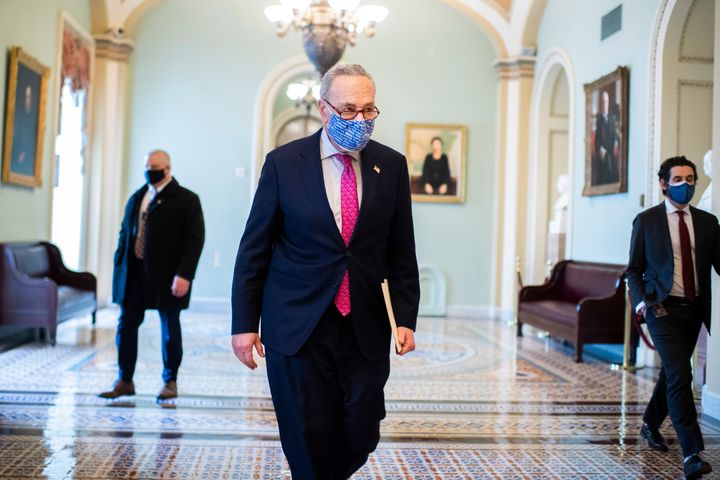 It’s not unusual for the governing party to use budget reconciliation to pass major legislation. Democrats used the legislative maneuver to get most of the Affordable Care Act through in 2010, Republicans used reconciliation to pass their tax bill in 2017, and they also attempted to repeal Obamacare through the budgetary process that year, albeit unsuccessfully.

The reconciliation process does have its limits, however. Senate rules dictate that any legislation passed through this budgetary maneuver must have a direct effect on spending or revenue, and, based on how Democrats wrote the resolution, it cannot increase the deficit by more than $1.9 trillion over the next 10 years.

That may make it difficult to pass some of President Joe Biden’s proposals, like increasing the federal minimum wage to $15 or making more permanent changes to unemployment insurance.

Sen. Joe Manchin (D-W.Va.) threw another wrench in the push to lift the minimum wage to $15 on Wednesday, telling reporters he supported a level that was “responsible and reasonable.” He said in his state that might be an $11 minimum wage when adjusted for inflation.

Despite moving ahead with reconciliation, Biden and Senate Democrats are still rhetorically signaling an openness to working with Republicans on a relief package. A group of 10 Republican senators, including Sen. Susan Collins (R-Maine) and Mitt Romney (R-Utah), made a $618 billion counterproposal earlier this week, and met with the president on Monday.

Collins said the meeting with Biden was “productive,” but the administration seems more concerned about the prospect of passing too little aid, rather than going too big. The GOP plan is far less than what the Biden administration and economists say is necessary to adequately address the economic and public health crises.

“I don’t think anybody changed anybody’s mind on anything at this point, but at least he knows the door is open for discussion,” Sen. Mike Rounds (R-S.D.), another senator who spoke with Biden, said Wednesday.

But Democrats know the clock is ticking and that trying to get GOP support could take up too much time. More than 18.2 million Americans were claiming jobless benefits as of last week, and federal unemployment insurance programs are set to expire in early March. States and localities are also staring down major budget holes as they attempt to implement mass vaccination programs.

“I have no patience for dithering or drastic cuts. Republicans are welcome in the room ― there’s no price of admission ― even as we go forward with reconciliation,” Sen. Richard Blumenthal (D-Conn.) told HuffPost.

There are fewer and fewer political incentives to working with Republicans as well. Recent polling showed two-thirds of Americans support the president’s relief proposal — a data point that prompted Biden’s White House chief of staff Ron Klain to declare the plan “bipartisan” on its merits, regardless of how Republicans actually vote.

“We need to understand that trying to be, per se, fiscally responsible at this point in time, with what we’ve got going on in this country — if we actually throw away some money right now, so what?” Justice told CNN.