Rep. Mikie Sherrill said in a new interview that a suspicious group in the Capitol complex on Jan. 5 — the day before a pro-Trump mob overran the building and forced Vice President Pence and hundreds of lawmakers into hiding — was wearing “MAGA hats and Trump things.”

Sherrill, D-N.J., has been among several Democrats in Congress who claimed that some of their colleagues may have assisted rioters with “reconnaissance” before they stormed the Capitol. Sherrill revealed the detail about the alleged garb of those she says she saw in the Capitol in an extended interview with CBS New York.

Sherrill also said that if the folks in “MAGA hats and Trump things” were, in fact, conducting reconnaissance, there is a possibility that the yet-to-be-named members of Congress who may or may not have been assisting them did not know what they were doing.

“I think that’s something that really has to be investigated, because there is a possibility that they did not realize what some of these groups were doing, that they were groups of constituents — and they should not have brought them into the Capitol complex,” Sherrill also said, according to CBS New York. 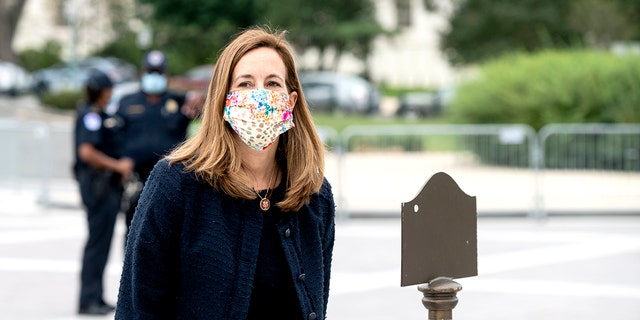 Rep. Mikie Sherrill, D-N.J., walks up the House steps for a vote in the Capitol on Thursday, Sept. 17, 2020. Sherrill is one of the House members who has been warning that some lawmakers may have assisted rioters before they stormed the Capitol on Jan. 6. (Bill Clark/CQ-Roll Call, Inc via Getty Images)

She continued: “In fact, they had received, many of the members had received a security brief on Jan. 3, the sergeant-at-arms reposted for the new Congress information that there were no tours allowed, even tours given by members. So they should not have been in there.”

When asked to specify details on how many lawmakers she may have seen leading tours or what party the lawmakers were members of, Sherrill declined.

“I don’t want to specify who they were, since it is an ongoing investigation. I have spoken to people at the FBI about this, and they called to ask about this,” she said, according to CBS New York. “I don’t really want to get into who it was at this time.”

Fox News has reached out to the U.S. Capitol Police and the sergeants-at-arms for both the House and the Senate to ask questions about whether there is substance behind these claims made by Democrats and whether there are active investigations. None of those agencies have responded.

House Speaker Nancy Pelosi, D-Calif., in a press conference on Friday said she may support lawmakers being prosecuted if a connection to those who attacked the Capitol is revealed.

“If in fact it is found that members of Congress were accomplices to this insurrection,” she said. “There may have to be actions taken beyond the Congress in terms of prosecution for that.”

One week later, the House of Representatives impeached Trump for “incitement of insurrection.”