A coalition of 23 state attorneys general is sending a letter to congressional leaders Tuesday threatening to sue to prevent the implementation of a Democrat-backed voting bill should it become law.

The group, led by Indiana Attorney General Todd Rokita, says H.R. 4, named the John R. Lewis Voting Rights Advancement Act, is “a misguided, clumsy, and heavy-handed effort to circumvent Supreme Court decisions, state sovereignty, and the will of the people.”

The attorneys general in the letter rail against the fact the law would reestablish federal preclearance for state election laws and threaten to “aggressively” fight against it should it become law.

“The bill, as introduced, would allow the United States Department of Justice to usurp the authority states rightly possess over their own elections, essentially federalizing the election system,” the letter says.

“H.R. 4 seeks to flip this Constitutional mandate on its head, turning the Department of Justice into a federal ‘election czar,’ wielding the power to challenge any new or existing election law based on the whims of the party in power and its desire to manipulate election laws to increase its chances to remain in power,” the letter adds.

Democrats have been pushing to pass a major voting bill.since they took control of Washington in January. They initially backed S. 1 and its House counterpart, H.R. 1, which were much more ambitious than H.R. 4.

Congressional Democrats introduced S. 1 several times over multiple years. But they fervently renewed their support for it in 2021 as a way to fight against election security laws in red states. The recent passage of such a law in Texas – and the Supreme Court declining to prevent it from going into effect – have only increased that sense of urgency.

Sen. Joe Manchin, D-W.Va., came out against S. 1 earlier this year, however, saying it went too far in several respects. He instead turned his attention to H.R. 4’s framework and worked on a bill he hoped could get the support of all 50 Senate Democrats. 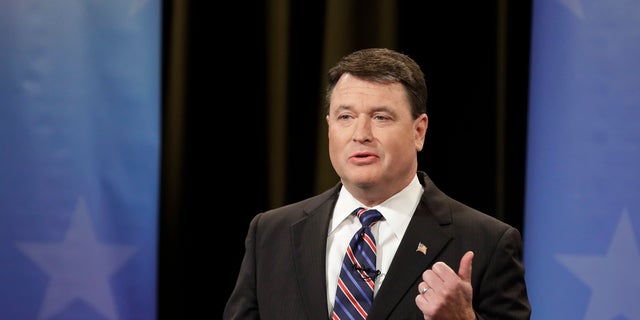 Any compromise legislation among Democrats will almost certainly not become law, however, because not enough Republicans support it to reach the 60-vote threshold to break a filibuster. Manchin has tried to convince Republicans to join Democrats on his compromise proposal, but he’s almost certain to fall well short of the 10 needed.

Senate Majority Leader Chuck Schumer, D-N.Y., said on the Senate floor Monday that the chamber will vote on the bill “as early as next week.” The bill will almost certainly fail, and Democrats will use the vote as a cudgel against Republicans in the midterms.

But the attorneys general who signed onto Rokita’s letter are happy to go on the record against the bill.

“Giving the Department of Justice unlimited authority over state election laws is not only unnecessary but also unconstitutional,” they said. “Please be advised that should H.R. 4 become law, we will seek action to protect the sovereignty of all states and the rights of our citizens.”