Tim Ball, who delivered packages for Amazon until quitting this year, said he prayed the same prayer every time he walked up to a home that felt “sketchy” in rural Texas. He said he’d see confederate flags, or signs that warned of shooting trespassers. He said he felt most fearful when delivering packages at night, sometimes working hours after Amazon’s competitors had ceased deliveries for the day.
Amazon’s fast deliveries have delighted many customers and helped it grow into one of the world’s biggest companies, valued at roughly $1.7 trillion. But there have been tradeoffs that have come with Amazon’s push for faster deliveries.
In interviews with Amazon delivery business owners and drivers and in a review of conversations on an internal Amazon forum, dozens of people who work to deliver Amazon packages said that late-night deliveries are often more dangerous and stressful.
Amazon (AMZN) relies on 3,000 small businesses called “delivery service partners,” (DSPs) who collectively employ 250,000 drivers to deliver packages, according to Amazon. DSPs rent vans from Amazon and are paid by the company for routes they complete. While these DSPs generally deliver only Amazon packages, some companies also do other delivery work.

The neighborhoods that DSP drivers deliver in aren’t consistent, so it’s difficult to develop local expertise such as where hostile residents may live, drivers and DSP owners say. Amazon delivers in a wide range of vehicles: some are branded Amazon vans, but others are unmarked. This is most noticeable during the holiday season as Amazon needs a larger fleet to meet demand. Amazon drivers often aren’t a familiar face arriving at a person’s home in a familiar vehicle.
(UPS and FedEx drivers also sometimes use unbranded vehicles or have their routes shift, according to the companies and employees. People who have worked at those companies as well with Amazon, say it’s not to the extent that Amazon DSPs do year-round.) 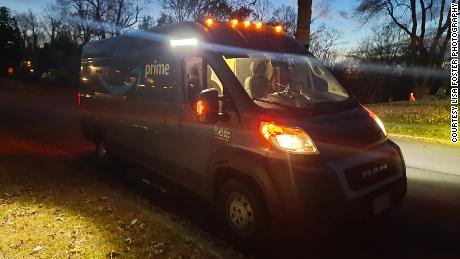 Amazon is far from the first company to deliver at night, and every delivery person can face difficulties after dark. But as Amazon pushes its labor force toward delivering packages to customers faster, its workers are generally out later than competitors, drivers and DSP owners told CNN Business. Amazon tells customers that deliveries occur between 6 a.m. and 10 p.m., a wider typical window than FedEx (8a.m.-8 p.m.) or UPS (9 a.m. to 7 p.m.) (Amazon told CNN Business that the vast majority of deliveries are completed well before 10 p.m. FedEx expects to deliver later than 8 p.m. during this holiday season, and UPS said it will go slightly past 7 p.m. this month.)
Current and former drivers like Ball, as well as many of the DSPs that employ drivers like him, say that night deliveries are especially challenging. Ball said that twice customers brandished guns as he approached their homes to deliver an Amazon package.
While Ball and other drivers and DSP owners said that uncomfortable experiences don’t happen exclusively after dark, Ball, who is Black, said he didn’t like being out after dark. It felt more dangerous, he said.
One night during his first year on the job, he said he parked outside a home in a rural town north of Houston at around 8:30 p.m. and approached the porch with a package in hand. He said he held it up high, so a man on the porch would see what he was doing. Ball said as he handed the man his package, he noticed a gun in the man’s hand..
“Oh damn, you was gonna shoot me, huh?” Ball recalled saying. “He was like, ‘Hell yeah, I didn’t know who you was.'”
Amazon has pioneered historic advances in e-commerce, like its Prime program that began offering two-day shipping for an annual fee in 2005. Amazon pushed further, starting one-day shipping for millions of products in 2019. It’s also built out its own logistics network, complete with Amazon shipping crates, tractor-trailers, vans and cargo bikes. It’s talked of using drones to deliver packages in 30 minutes or less.
Today, through its network of DSPs, Amazon delivers most of its own packages, and it surpassed FedEx in volume for the first time last year, according to the shipping company Pitney Bowes. 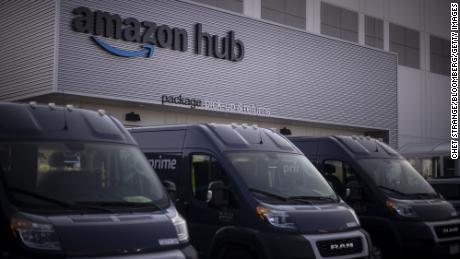 The challenge of nighttime deliveries is especially apparent in rural areas, where streetlights are uncommon. Rural customers are more likely to pull a gun on someone entering their property after dark, according to multiple DSP drivers and owners. Drivers unfamiliar with a customer’s rural property may not navigate it as effectively in the dark and end up stuck in a rutted dirt driveway.
Some drivers and DSP owners have at times questioned Amazon’s commitment to safety, due to late deliveries. Amazon says drivers shouldn’t make deliveries if they feel unsafe, but drivers say they feel an overriding pressure to complete their routes and are sometimes criticized by colleagues or Amazon employees at the delivery stations for returning packages to delivery stations.
This story is based off interviews with 10 Amazon delivery drivers, nine people who own Amazon delivery businesses and a review of conversations on an internal Amazon forum where dozens of DSPs have spoken candidly about nighttime deliveries.
“Delivering in the dark is a common industry practice. We’re committed to driver safety and have continued to invest in new state-of-the-art technologies to ensure DSPs have the tools they need to foster a culture of safety with their teams and instill safe driving behaviors on road,” Amazon spokeswoman Maria Boschetti said in a statement. “We also partner with DSPs and drivers to get their feedback and ideas to help guide our product and technology roadmap.”

Many Amazon DSP owners say that they used to load their trucks and began deliveries shortly after 7 a.m. but last year loading times shifted to late morning, sometimes as late as 11:30 a.m. The late start allows more packages to arrive at Amazon delivery stations each morning and to be loaded onto delivery trucks, DSP owners said. Customers ordering late at night are more likely to get their package the next day. Later loading times also means that drivers spend more of their shift out after sundown, owners said.
Amazon’s competitors do not cite safety as a reason for not delivering as late as Amazon. 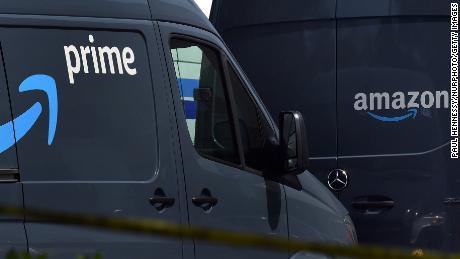 Amazon said it has taken other steps to improve driver safety, including allowing customers to view their driver’s first name and photo on the progress tracker page when their delivery is 10 stops away.
It’s also outfitted its vehicles with cameras to provide drivers with real-time alerts to help stay safe.
Amazon said that its accident rate in the first nine months of this year was lower than in the same period of 2020, and that it’s seen sharp reductions in distracted driving and stop sign violations.
UPS spokesman Dan McMackin said that his company’s decision to wrap up deliveries at about 7 p.m. is largely driven by business needs. UPS drivers pick up packages from businesses at day’s end, so they need to do so while businesses are still generally open.
FedEx, which says deliveries generally wrap up about 8 p.m., but it will likely extend later this holiday season, declined to say why it delivers during certain hours and whether safety is a motivating factor. The US Postal Service, which says it generally wraps up deliveries at 5 p.m., said it does so to provide the best service. Spokeswoman Kimberly Frum declined to say if safety was a factor.
Amazon told CNN Business that the vast majority of its deliveries are completed well before 10 p.m. It also said it’s prioritizing daytime deliveries in areas that require it most. It declined to detail what areas these are and when the practice began.
Some DSP owners say that their drivers have acclimated and grown to like the later hours. 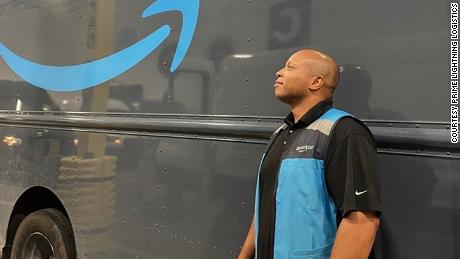 Sebastian Festa, who owns a DSP in Florida, told CNN Business that most of his drivers prefer later dispatch times because they sleep in later and encounter less traffic while driving.
Will Boyd, owner of a Colorado DSP, said his drivers have adjusted to delivering later than when he first launched his DSP in 2018 and loaded trucks at 7 a.m.
“It was just getting used to it and saying that it’s different,” Boyd said. “Once you condition your workforce to operate in that time, their life patterns kind of change, it works out.”

Some DSP owners have taken steps to make dark deliveries — whether late at night or early in the morning — more comfortable and welcoming for their drivers.
Lisa Saenz, owner of LMH Logistics, which delivers bulk items near Raleigh North Carolina, told CNN Business that her staff had suggested sending out its clearly branded Amazon trucks first each morning. Saenz’s initial deliveries often happen before dawn.
Saenz’s business also uses white Ryder trucks with smaller magnetic markings, which are not as clear to a rural customer that they are an Amazon truck.
“You’re pulling up, pitch dark out, in a white Ryder truck. Maybe not the best idea,” Saenz said. “If somebody looks out the window they clearly know this is Amazon that’s just pulled up.”
Jeb Lopez, owner of Wheelz Up Logistics in Northern Virginia, said that this April he added LED lights to the sides of his Amazon vans, to light up pathways for his drivers as they make deliveries. He said he was motivated by safety and found that the lights were popular with his drivers.
Lopez said that after installing the lights at the auto repair shop he also owns, Amazon told him he was in breach of contract. Lopez said that after he consulted an attorney Amazon later agreed to let him keep the lights, but he was not to install additional lights or share his design with other DSP owners.

Amazon declined to comment on its responses to Lopez.
Source: Read Full Article