New York (CNN Business)A version of this article first appeared in the “Reliable Sources” newsletter. You can sign up for free right here.

We’re seeing only a small fraction of the action in Ukraine and Russia right now. And some of what we are seeing in social feeds and faraway commentary is distorted. So it’s important for news outlets to recognize this knowledge gap and underscore the known unknowns in the minute-by-minute coverage.
I hate to fall back to the “fog of war” metaphor, but it exists for a reason. The fog is thick right now. Military officials know it. During a Sunday morning press briefing with Pentagon reporters, an unnamed senior defense official said something about “humility” that stood out to me. “The Ukrainians are putting up a very stiff and brave and heroic resistance,” the official said. “But we are only on day four. And I would be reluctant to provide an estimate of how many more days there are here.” The point: Predictions are a fool’s errand. Combat is ugly and unpredictable. “Everybody needs to look at this with a bit of a sense of humility here,” the official said.

“We might not know for days or weeks or months about the actual course of the battles that are being fought right now,” David French told me on Sunday’s “Reliable Sources” broadcast.

French’s rule of thumb is that in warfare, “the more specific the information, the bigger the grain of salt you should read it with.” He said “right now, the more reliable reports, quite frankly, are going to be the more high-level, more vague reports. Things like, ‘The Russians are disappointed by their progress so far.’ That’s something that I think we can be pretty sure about. Some report that says ’15 kilometers from Kyiv, there was a tank battle involving X number of tanks destroyed and X number of Russian soldiers killed,’ take that with a huge grain of salt because we don’t know. We don’t have the resources to know. And in fact, we might not know for a long time exactly what happened where and when in this fight.”

Practical challenges on the ground

Curfews and checkpoints are two of the practical challenges for reporters in Ukraine right now, on top of the obvious security and logistical concerns. “It is an enormous feat of logistics to live or move around in Ukraine right now,” NPR’s Tim Mak tweeted. “Gas, power, comms, transport, housing, safety [are all] constant issues.”
CNN’s Clarissa Ward in Kyiv brought up the curfew challenge and “very real limitations on where and how we can move around” when I spoke with her on Sunday’s “Reliable Sources.” She described how CNN staffers have been “combing exhaustively through all the social media footage” from Ukraine and Russia, working to geolocate it and “place it in its appropriate context.”

Among experts who think long and hard about social media and information wars, I’m seeing two different lines of thought. One is that the eyewitness content coming from Ukraine is critically important and compelling — a “TikTok war” in action. That’s true. But there is also truth in the other line of thought — that we’re seeing relatively little video from the front lines. As Emerson T. Brooking of the Atlantic Council’s DFRLab wrote, “The buildup was recorded on TikTok and in relative safety. But streaming apps are not good when battery and bandwidth are scarce. Instead footage will be uploaded in waves, whenever terror recedes.”
The same competing lines of thought apply to disinformation. Yes, there are many mislabeled and totally bogus photos and videos making the rounds, but Casey Newton offered this contrarian view on Sunday: “The role of misinformation/disinformation feels minor compared to what we might have expected. It’s an unusually clear case of good vs. evil, and that has translated with powerful clarity in the media — including social media.” Newton added, “Tech co’s have to stay on alert for viral garbage, of course, especially as Russian state media gets deplatformed and Putin has to rely on ‘organic’ posts. In the meantime, though, social media has mostly struck me as a force multiplier for Ukraine and pro-democracy efforts.”

…Incredible digital platforms are coming up against the crude, cruel reality of killing. Urban warfare experts are tweeting tips to Ukrainian civilians. The makers of a game about the impact of war on civilians are donating profits to the Ukrainian Red Cross. Photos of charred corpses are interspersed with the normal sights and sounds of social media. 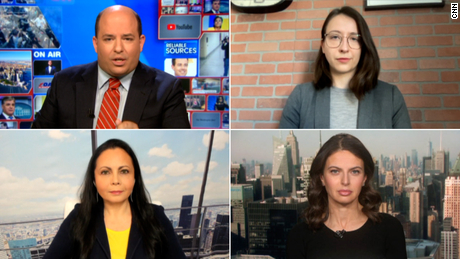 Big Tech is a big player in this, whether it wants to be or not. Over the weekend Google joined Meta in barring Russian state media outlets to run ads. Government officials like EU Commissioner Thierry Breton are pressuring Big Tech to take a hard line against Putin. After a call with YouTube and Google leaders on Sunday, Breton wrote, “Online platforms took unprecedented steps after the Capitol Hill attacks. Surely Russian war propaganda merits at least the same level of response.”

Remember last week’s stories about academics spotting traffic jams on Google Maps and anticipating the start of the invasion? Well now there’s this:
“Google Maps has blocked two features in Ukraine that provide information to users in real time,” CNN’s Brian Fung reported Sunday night. “The disabled features include Google Maps’s live traffic overlay — a feature some researchers have used to monitor the conflict from afar — as well as Live Busyness, a feature that displays how popular a location may be at a given time. Google made the change in an effort to help keep Ukrainians safe and after consultations with local officials, the company said.”

Danish correspondents Stefan Weichert and Emil Filtenborg “were driving near the town of Ohtyrka — which is around 60 miles outside of Kharkiv — when gunfire peppered their vehicle and left both bleeding heavily from bullet wounds,” The Daily Beast’s Nico Hines reports. They were able to escape and were treated at a hospital. “The star freelance journalists, who live in Kyiv, have been filing dispatches from Ukraine for The Daily Beast and Danish newspaper Ekstra Bladet,” Hines wrote.

The last news crew in Kharkiv?

Darja Stomatová is a reporter for CNN Prima News, a CNN international affiliate in the Czech Republic. On Sunday she reported live for both CNN Prima and for CNN’s global audience from a makeshift shelter in a hotel in Kharkiv. “She says they may be the last foreign crew there,” Ed Meagher wrote.
Stomatová described “the situation was changing” throughout the day on Sunday: Loud gunshots in the morning, explosions, then some semblance of calm. “It is very important to be here right now,” she said. Her companions at the hotel bunker feel like friends at this point, she added.

Sunday’s NY Post front page was headlined “FIGHT LIKE ZEL.” That kind of says it all. “Before Russia invaded Ukraine, President Volodymyr Zelensky was often derided as a comic turned unlikely politician,” the NYT’s Steven Erlanger writes. “But with the help of social media, he has become the leader Ukraine did not know it needed.”

Oliver Darcy writes: “Ukraine’s TV companies are going to do everything they can to stay on the air, should Russian forces seize control of their main studios. A spokesperson for the 1+1 Media Group, one of Ukraine’s largest media conglomerates, told me over the weekend that it has, in collaboration with other TV companies, ‘developed a plan for a backup studio for TV broadcasting, which is located in a specialized shelter and can be used in the event of a threat to interruption.’ As I wrote in Friday’s newsletter, Ukraine’s TV stations are all in emergency mode, broadcasting non-stop news coverage with no commercial breaks.”

Darcy continues: “The 1+1 rep told me that the non-stop coverage, which has been dubbed the United News Marathon, is possible through teamwork. ‘We have teamed up with other Ukrainian media groups to broadcast in turns for 6 hours each in a single broadcast,’ the spox explained. “Each time an air threat is announced in Kyiv, our colleagues are going live from a backup studio in Kyiv. Plus, the company’s photo news service, UNIAN, is also offering its images at no cost.”

Russia Today, the Russian-financed propaganda network, is under pressure right now. Multiple staffers have publicly said they are resigning in recent days. Distributors have been questioned about why they are carrying the network. WaPo’s Paul Farhi took an in-depth look at RT and said it “appears to be somewhat more successful in spreading its message via digital platforms — in part because its posts on Facebook, TikTok and other platforms are amplified by right-wing American commentary organizations.”
— Related: Ann Simmons goes inside Russian state media and explains how they have “issued disinformation that seeks to support” Putin’s version of events. (WSJ)
— Former RT anchor Liz Wahl says “One thing that is clear to me: Fox News hosts like Tucker Carlson, along with other right-wing media figures, are at times indistinguishable from the propaganda on my former network, RT.” (Daily Beast)

“We are facing a huge threat. It is not easy to work here under the circumstances,” TV Rain anchor Ekaterina Kotrikadze told me on Sunday’s show. She described the Kremlin’s repeated crackdowns on free media in Russia and TV Rain’s struggle to stay online. Masha Gessen also spent a night at the network’s studio — read the story for The New Yorker here.

A “troubling tone” — and offensive comparisons

“Russia’s invasion of Ukraine shocked the world as the largest cross-border European conflict in decades. But some observers see a troubling tone creeping into how some media outlets have attempted to contextualize it, describing Ukraine as more ‘civilized’ than other countries, such as Iraq, Afghanistan or Syria,” WaPo’s Sarah Ellison and Travis M. Andrews wrote Sunday. Charlie D’Agata of CBS apologized after one of his remarks went viral over the weekend. He was “just one of many correspondents and commentators using offensive comparisons in their effort to explain Ukraine’s plight,” they wrote.
>> Al Jazeera has a story all about this, as well.

— Many of Monday’s papers are leading with a version of this Financial Times banner headline: “Putin puts nuclear forces on alert.”
— Check CNN’s live updates page for the latest info here.
— “The sudden smothering and suffocation of the Russian economy is without modern precedent,” Derek Thompson commented. “This is terra incognito and I have no idea what happens next.” (Twitter)
— Charlie Warzel on the experience of the news right now: “As with the earliest days of Covid, new and nuanced information is super important but it’s also basically impossible for the news to give people what they want which is any kind of certainty/definitive relief.” (Twitter)
— Jim Acosta’s comment on Sunday night: Zelensky “was asked if he wanted to be evacuated. He said, ‘I need ammunition, not a ride.’ If you want to give somebody a ride out of town, let’s give it to Vladimir Putin.” (CNN)
— Condoleezza Rice on “Fox News Sunday:” “I’ve been told the Russian television is playing [World] War II and Nazis and so forth, but nobody under the age of 40 in Russia watches television. They are on the internet. They can see what’s happening there.” She said Putin is “having a harder time hiding his crimes than he did even in 2008.” (Newsmax)

— It appears the impact of Putin’s war “is starting to set in, startling even his most ardent state TV propagandists,” Julia Davis writes. “It’s all fun and games ’till they seize your Italian villa.” (Beast)
— Li Yuan reports that the “Chinese internet” is “mostly pro-Russia, pro-war and pro-Putin.” (NYT)
Source: Read Full Article