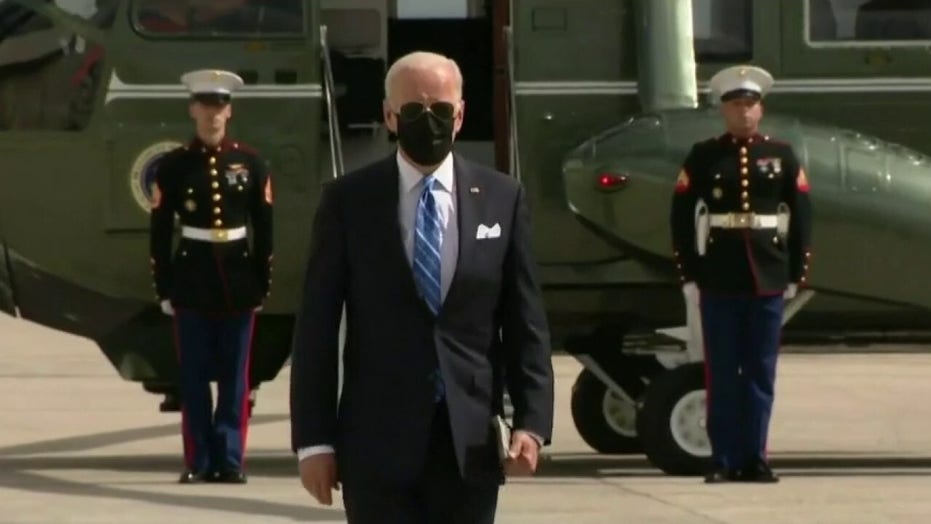 Biden’s incompetence is costing him in the polls

Pollster Tom Bevan: On issue after issue, whether its Afghanistan, foreign policy, the border, taxes—he is losing support

With all of the Biden-created crises worsening by the day, the president’s radical agenda stalled in Congress, and more daunting problems coming on the radar with no end in sight, Americans are facing a crisis of confidence not felt since the depressing days of stagflation and the Iranian hostage crisis during the administration of President Jimmy Carter in 1979 and 1980.

The unforeseen consequences of vaccine mandates are continuing to backfire by causing more pain across the country with airline and hospital worker shortages; supply chain disruptions are causing enormous economic concern; the prices of oil, gasoline and groceries are all on the rise; and the Virginia governor’s race is on the verge of getting away from the Democrats. Joe Biden needs to make an abrupt change double quick.

Biden’s border crisis, Biden’s crime crisis, Biden’s inflation crisis and Biden’s Afghanistan crisis – while still ongoing disasters – are getting pushed out of the headlines because the mainstream media fully supports the Biden administration and frankly, it’s getting impossible to cover it all. And, set aside for a moment the slow-moving train wreck that is the Hunter Biden conflict of interest saga.

The White House must be a very difficult place to work in these days because the arrogant Biden brain trust is running out of options. Questions like “how did it get so bad so quickly” and “what can we do to stop the bleeding” are getting hard to answer.

The president’s popularity is falling like a lead balloon, because, well, no one ever actually really liked Joe Biden or his policies very much – including his radical progressive base. According to a recent Quinnipiac poll, Biden’s job approval rating right now stands at 38% approve and 53% disapprove. Juxtapose these numbers with data from just two months ago, when the president’s average approval rating was 50% approve and 46% disapprove, according to Real Clear Politics.

This sudden fall from grace has been nothing short of precipitous and experts are now wondering where the bottom is for Biden. New polling indicates that on specific issues, the president’s not fairing any better. On his handling of the economy, Biden’s approval stands at 39%; on foreign policy, a paltry 34%; and on the border crisis, just 23% approve of the atrocious job Biden’s done.

But all is not lost. Because this is Joe Biden’s America – where everything is political – and desperate times call for desperate measures.

With the mainstream media, deep state and social media all fully Trump deranged and in Biden’s hip pocket ready to help at a moment’s notice, amazing things can happen. So, get ready for Joe Biden and Anthony Fauci to shock America. In order to stop the economic hemorrhaging and sagging poll numbers, Biden could announce we have achieved herd immunity in the fight against COVID-19 – whether it’s true or not.

According to the CDC, they “are still learning how many people need to be vaccinated against COVID-19 before the population can be considered protected.”  In Washington-speak, this is known as giving yourself just enough wiggle room to come up with a number that suits your political needs when the time comes. And that time is coming fast.

Rest assured that “Saint” Fauci will be more than ready to take to the airwaves to sell it. Forget the mandates, forget the closings, forget the masks, forget all that, Fauci will tell us with a straight face, because there’s a Democrat presidency, Democrat majority in Congress, and a fast-approaching Virginia governor’s race to save.

Biden and the Democrats are finding out the hard way that the American people love freedom and individual liberty.

Like Kamala Harris telling us not to trust Trump’s vaccine, like Pfizer waiting to announce its vaccine until after the 2020 election, like schools magically allowed to open when Biden became president, and like the White House’s “summer of freedom” announcement – oops – this is all politics.

Biden and the Democrats are finding out the hard way that the American people love freedom and individual liberty. The left’s attempt to sell socialism and heavy-handed government mandates in the United States of America has been like trying to jam a square peg into a round hole – it just doesn’t fit.

Biden’s unconstitutional mandates have created some strange political bedfellows that spell mortal danger for the Democrat’s electoral success. When ideological conservatives, hospital workers, police, pilots, the military and Black Lives Matter are all united on an issue, you are in some deep kimchi.

So, one answer for team Biden is to manufacture a win over COVID-19 in order to overcome their litany of mistakes on mask-wearing confusion, collusion with teacher unions on school closing rules, and divisive vaccine mandates. The White House needs to do an about face on their COVID-19 mitigation policy failures without delay.

With radicals in Congress and Sens. Joe Manchin, D-W.Va., and Kyrsten Sinema, D-Ariz., making it impossible to come to an agreement on the infrastructure and irresponsible multi-trillion-dollar socialist wish list spending bills, President Biden needs a lifeline just nine months into his presidency. Biden must find a way to undo his vaccine mandate because it’s causing a dangerous economic slowdown.

Sound far-fetched? Maybe, maybe not. With Election Day in Virginia is just three weeks away, look for the White House to start their 180 degree turn soon.