The Age and The Sydney Morning Herald can reveal Crown engaged Mr Conroy’s firm TP Public to advise it on dealing with the fallout from the Victorian royal commission. The highly confidential agreement between Crown and TG Public contains a strict non-disclosure agreement. Mr Conroy declined to comment when contacted by this masthead. 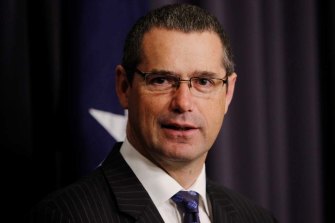 The royal commission has uncovered a string of damaging revelations about Crown, including widespread breaches of responsible gambling laws and the underpayment of up to $480 million in state taxes.

Counsel assisting the royal commission Adrian Finanzio, SC, this week said Crown was unfit to hold a casino licence and recommended that it be revoked. He also said that executive chairman Helen Coonan and Crown Melbourne boss Xavier Walsh should not be associated with the company.

Crown has been desperately lobbying the Andrews Government to allow it to retain the license for its Melbourne casino, which contributes about 70 per cent of its earnings.

The company wrote to the Victorian government a week before the close of evidence at the royal commission, warning it may default on its debt if the license were revoked. The letter was described by commissioner Ray Finkelstein QC as being designed to “avoid a particular finding the commission might make”.

Mr Conroy is considered one of the Victorian Labor Party’s most powerful figures. Since leaving public office, the former federal communications minister and factional kingpin has worked as a lobbyist for the gambling industry and as a commentator on Sky News Australia.

One senior Crown executive told The Age and Herald they did not know exactly what Mr Conroy’s consultancy role involved but did not rule out the possibility one of his tasks was to find new directors for the board that might meet with the Andrews govenrment’s approval.

This conflicted with another Crown inside source who said Mr Conroy’s contract did not involve finding new directors and that this was “above his pay grade”.

A Crown spokesperson said that Mr Conroy’s contract strictly prohibited him from acting in a lobbying role. Such a position would require a listing on a state government register of lobbyists.

However the spokesperson the confirmed existence of the agreement with Mr Conroy’s firm, and that one of its tasks was to prep Crown witnesses that appeared before the Royal Commission.

Uncertainty over the licence has left Crown in financial limbo and wiped billions from its market value. On Friday Sydney based The Star withdrew a $12 billion proposal to merge with Crown.

Crown is now actively looking to replace Ms Coonan with the contenders firming up to be either existing Crown board member Nigel Morrison or director-elect Bruce Carter.

The findings of the royal commission are due to be handed down by Mr Finkelstein in October.