Crown Resorts wanted to limit a forensic audit of its bank accounts for evidence of money laundering from seven years to just three until the NSW gambling regulator insisted on a more comprehensive search for criminal infiltration.

Victoria’s royal commission into Crown also heard on Wednesday that the review Deloitte is now conducting to help Crown win back its suspended NSW casino licence does not cover internal customer accounts that could also reveal criminal activity. 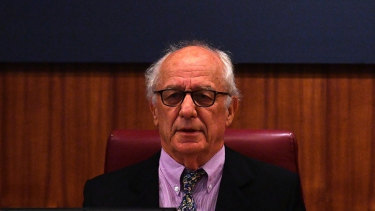 Counsel assisting the inquiry have told commissioner Ray Finkelstein that Crown has shown a paten of trying to limit external review it commissions. Credit:AAP

In February, the long-running Bergin inquiry found Crown could not be considered suitable to hold a casino licence in NSW “without a full and wide-ranging forensic audit of all of their accounts” after the inquiry found extensive evidence of money laundering in two bank accounts used by patrons to deposit gambling funds.

Deloitte partner Lisa Dobbin told commissioner Ray Finkelstein, QC, on Wednesday that Crown engaged her firm in February to conduct that review among other work on its anti-money laundering systems.

After originally proposing a review of bank transactions from 2014 to February 2021, Ms Dobbin said Crown decided to limit the review to just a three-year period. Crown and its lawyers Allens did not explain why, but she said seven years was more appropriate and “typically what I recommend”.

“For the purposes of determining to the extent to which there’s been money laundering activity, certainly the longer period gives you a better opportunity to identify that,” she said.

In any event, Crown agreed to change the review back to seven years after seeking feedback from the NSW Independent Liquor and Gaming Authority, whose chairman Philip Crawford wanted a nine-year review period.

Counsel assisting Meg O’Sullivan told the inquiry on Monday that this week’s evidence would show a pattern of Crown limiting the scope of external reviews it commission on itself.

Deloitte’s preliminary work has found suspicious transactions in 14 of the 44 relevant Crown bank accounts it has examined, but Ms Dobbin said that more work was needed to determine whether or not they were cases of money laundering.

The inquiry also heard that the Deloitte review – which will not be finished before commissioner Finkelstein reports his finding by August 1 – does not include a detailed examination of Crown’s internal customer account system.

Ms Dobbin agreed with Ms O’Sullivan that this was despite those so-called “DAB accounts” – which record casino patrons’ credits and transactions – were a “significant area of potential money laundering activity”.

“When you get to the end of this project, you’re not going to be able to say to anyone … that there’s no money laundering on the DAB accounts?” Ms O’Sullivan asked.

“No, we won’t be able to say that,” Ms Dobbin responded.

She said Deloitte and Crown had taken the Bergin inquiry’s recommendation to review all “accounts” to mean bank accounts only. “If you consider accounts to mean DAB accounts, then our review is not comprehensively covering all of those accounts,” she told the inquiry.