Crown Resorts stopped an independent review of new anti-money laundering controls early this year after preliminary findings suggested it was not complying with measures to prevent criminal infiltration of its bank accounts.

Neil Jeans, principal at the anti-money laundering consultancy Initialism, told Victoria’s royal commission into Crown on Tuesday that Crown commissioned him in early 2021 to review its recent ban on cash deposits and third-party transfers to its patron bank accounts. 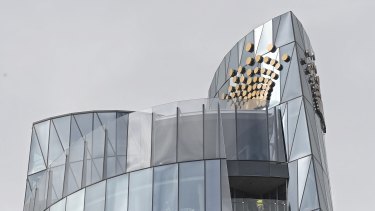 But the review was never completed, he said, after Crown declined to give him the information he needed to conclude whether the large number of third-party deposits he found between November and February were breaches of its new policy.

Mr Jeans said he presented the draft findings showing the potential breaches to Crown’s senior Crown compliance executives Nick Stokes and Steven Blackburn in February, but they did not act on his request to investigate each deposit in more detail.

Counsel assisting the inquiry Meg O’Sullivan asked Mr Jeans whether he thought Crown had “deliberately decided not to find out the final results of your analysis”.

“That’s something you would have to ask Mr Blackburn and Mr Stokes,” he responded.

The inquiry heard on Monday that a new review underway by Deloitte has found instances of suspected money laundering in 14 Crown bank accounts.

Mr Jeans told the commission on Tuesday that he suggested to Crown in August 2019 that it conduct a review of its accounts after this masthead reported they were being used by criminals to bank dirty cash. But Crown did not start a review until 13 months later, in October 2020, after the issue became a major focus of the Bergin inquiry.

Even then, Crown limited the review to the so-called Southbank and Riverbank accounts examined in the inquiry and excluded other accounts Mr Jeans said should be examined, while searching for only three transaction patterns that indicated money laundering rather than nine like Mr Jeans suggested.

Mr Jeans said that Crown had also not acted on his call for a “root cause analysis” to find out why it had failed to identify or act on instances of money laundering in its accounts.

“I think it would have been fundamental for a root cause analysis to be undertaken to understand what went wrong,” Mr Jeans said.

Pushed by commissioner Ray Finkelstein, QC, Mr Jeans agreed that there was a “real danger” Crown’s failure to stop money laundering could continue without such a review.

Mr Jeans also accused Crown of misrepresenting a brief review he wrote of a proposed new money laundering control in 2019 to satisfy Victoria’s gambling regulator it had acted on a recommendation from its 2018 review of Crown’s casino licence.

Based on evidence the Victorian Commission for Gambling and Liquor Regulation officers gave to the inquiry last week, Mr Jeans said it appeared Crown pretended his brief report was more comprehensive than it really was.

The commission will continue its public hearings on Wednesday.