Crown Resorts says it will only work with high-roller "junket" partners again if Australian gambling regulators introduce a licensing regime for the controversial tour operators.

Revelations by The Age, The Sydney Morning Herald and 60 Minutes last year that many of Crown’s most important junket partners had extensive links to Asian criminal syndicates triggered a NSW probity inquiry which is considering whether Crown should keep the licence for its new Sydney casino, set to open next month. 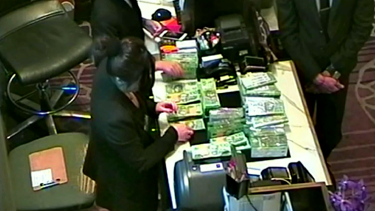 The NSW inquiry has examined this suspicious transaction in the private gaming room of one of Crown’s largest junkets partners, Suncity. Credit:ILGA

Crown said in an ASX announcement on Tuesday that its board had decided to "permanently cease dealing with all junket operators".

"Crown will only recommence dealing with a junket operator if that junket operator is licensed or otherwise approved or sanctioned by all gaming regulators in the states in which Crown operates," the company said.

Junkets, which arrange to bring mostly Chinese high-roller gamblers to casinos around the world, are not licensed in Victoria, NSW or Western Australia.

Crown said on Tuesday it had started consultation with the regulators in those states, which oversee its casinos in Melbourne, Perth and Sydney. Crown has suspended working with junkets while Australia’s borders are closed and so it could undertake a “comprehensive review” of its business partnerships.

The NSW gambling regulator will meet tomorrow to decide whether to intervene to prevent Crown from opening its new casino at Barangaroo next month, until the inquiry conducted by Commissioner Patricia Bergin is completed. Commissioner Bergin is set to report on Crown’s suitability to hold a licence by February.

Crown’s legal team was set to begin oral submissions to the inquiry on its dealings with junkets, but requested a one-hour adjournment just before 11am. Crown published its announcement to the ASX shortly after.