Election night may be turning into election week (month? year? 😩) but in Missouri, things are refreshingly more decisive. Progressive Cori Bush has won her election bid for a seat in Missouri’s 1st Congressional District, meaning she will become the first Black woman ever sent to Congress by her state.

It was hardly a close race. Bush defeated her opponent Anthony Rogers by earning a whopping 85 percent of the vote. “This is definitely a night to remember,” Bush said in her acceptance speech. “This has been a historic day from the beginning to the end.” 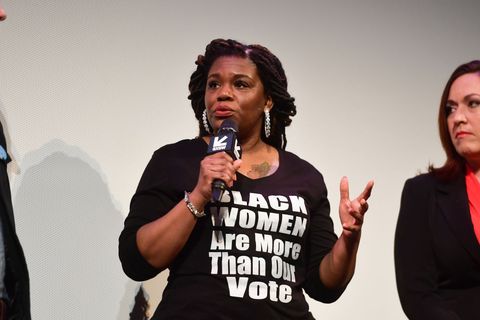 “As the first Black woman and also the first nurse and single mother to have the honor to represent Missouri in the United States Congress, let me say this,” she said. “To the Black women, the Black girls, the nurses, the essential workers, the single mothers: This is our moment.”

Bush is known as a leader in the Black Lives Matter movement, becoming involved after the 2014 death of Michael Brown at the hands of Ferguson, Missouri police. She’s also a nurse and a pastor.

Bush’s victory comes after she defeated longtime incumbent Lacy Clay in the primaries in August by less than 5,000 votes. According to Newsweek, this win ended a *half-century reign* of her district being represented by the Clay family.

Even though we’re all waiting with bated breath for the presidential election results, at least we’ve got this in the books!