Rep. Andy Kim (D-N.J.) announced Tuesday that he had given the suit he wore on Jan. 6 as he cleaned up debris left inside the U.S. Capitol by a violent insurrectionist mob to the Smithsonian.

Kim, who was in his office in a separate government building when rioters stormed the Capitol, was photographed picking up trash around midnight after the House finished certifying Democrat Joe Biden’s victory. 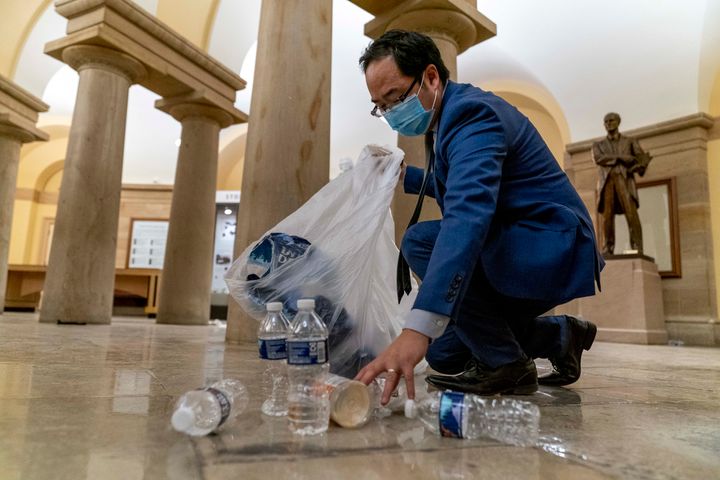 The Smithsonian is curating an exhibit to document what happened on Jan. 6. Kim said that the museum reached out to him to request the suit and he donated it because the telling of stories from that day “isn’t optional, it is necessary.”

Kim also shared his story, the one behind the blue suit:

“When the Smithsonian asked me to donate the blue suit, I thought about how the suit itself is unremarkable. Bought off-the-rack at JCrew during a holiday sale,” he wrote in a Twitter thread. “I wanted a bright blue new suit to wear to Biden’s inauguration.”

Kim said he decided to wear the suit on Jan. 6 after waking up to news of Democratic wins in Georgia. It was meant to be a suit of celebration, he said, “and I thought what better way to give the suit meaning than to wear it when I confirm the electoral college and then later to the inauguration.”

Kim said he wore the suit one more time: when he cast his vote a week later to impeach former President Donald Trump for inciting the insurrection.

“The suit still had dust on the knees from Jan. 6. I wore it so I would have no doubt about the truth of what happened,” Kimm said.

When he returned home, Kim vowed to never wear the suit again and even considered throwing it away.

“It only brought back terrible memories,” he said.

Then, in the following days, people from around the country began reaching out to him to share how they felt when they saw what he did:

“There are many stories of Jan. 6. Mine is just one. We cannot heal as a nation unless we have truth. Let truth be truth,” Kim said, referring to those who have sought to erase and rewrite what happened on that day, and Republicans who blocked efforts to establish a bipartisan commission to investigate it.

“They say just move on and turn the page. But I say, you can’t turn the page of American history until you write the page first,” Kim said. “Instead of trying to erase history they don’t like after the fact, politicians should just act in a way that doesn’t produce such shameful results. It’s not hard to not incite or cover up an insurrection.”

While America’s history isn’t always pretty, Kim said the Smithsonian’s job was to tell it. He hopes that telling it will help the nation to improve and repair its faults.

“It’ll be surreal to one day take my kids to the Smithsonian and show them the blue suit behind glass,” Kim said. “I hope they grow to know the truth of Jan. 6, but I also hope the story ultimately is one of hope and resilience. I hope that is what they and others see in the blue suit.”