Anchors at CNN and MSNBC put the squeeze on Sen. Joe Manchin, D-W.Va., Thursday as they hounded him over his opposition to parts of the Democrat-backed $1.75 trillion social spending bill currently being debated in Congress.

During appearances on the networks, Manchin argued his case for wanting to understand the cost and ramifications of the bill, as well as his desire to address certain aspects of the it individually, such as paid family leave, rather than as part of a larger package.

“To get to yes [on the spending bill] is first to find out what the real cost is … We’re using ten years of revenue to basically supply one, or two, or five, or six years of services, and that’s not the true cost. The true cost would be ten years to ten years. So if you have ten years of revenue, then you would think that if we put a program in place, that program would last ten years too,” Manchin told Mika Brzezinski, co-host of MSNBC’s “Morning Joe.”

Manchin stressed the need for a Congressional Budget Office (CBO) score to be released on the bill and implored Democrats to take things more slowly in order to see if inflation in the U.S. would continue to get worse.

“[My colleagues] all know where I stand. I’ve been trying to be as transparent as humanly possible on the things that we all agree on. And when we have such a divided Congress in the House and the Senate – and I think the votes in Virginia and also in New Jersey show how divided we are, Mika,” he added.

CORI BUSH: MANCHIN OPPOSITION TO BUILD BACK BETTER IS ‘ANTI-BLACK’

Manchin pushed back throughout the segment on the hosts’ efforts to pull definitive answers from him on whether or not he would vote for the bill if it came to the floor of the Senate within his cost parameters; however MSNBC contributor Mike Barnicle brought his questioning closer to home.

“You represent a state filled with some of the hardest working people in America. A lot of old people. A lot of poor people. A lot of veterans. A lot of people who live on the edge and know the meaning of the urgency of now,” Barnicle said. “These extended delays over this program that we’re talking about that is filled with so many items that could help people from Cabin Creek or Farmington or wherever, could help them tomorrow, what do you say to them in terms of a country that spends so much money on aircraft carriers and fighter jets and that we won’t spend immediately to help you now?” 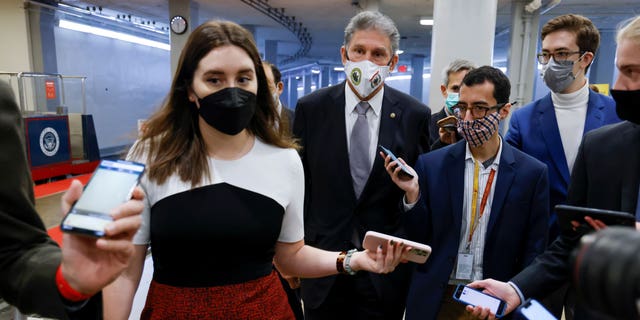 Manchin responded that the people of West Virginia had “common sense” and understood the value of a dollar, but that he was concerned over what inflation and the national debt could do to interest rates in a way that would negatively impact West Virginians.

Brzezinski jumped in asking what could be done to speed up the process on the bill in order to help Americans. “Why can’t it be done right now?” she asked.

Manchin said more than $5.5 trillion had already been spent on relief via the coronavirus relief bills and that the entire plan to rebuild Europe after World War II only cost $4.7 trillion.

“We’re way over five [trillion], and we’re going to spend another two or three [trillion]. I don’t know why we’re saying it has to be done right now,” Manchin said.

In a later appearance on CNN, Manchin was hammered by host John Berman over the Republican victory in the Virginia gubernatorial election as he appeared to place some blame on him for the spending bill not passing Congress and being a selling point for Democrats in the race. He also grilled him over his stance against paid family leave being included in the bill.

“One thing President Biden says may have had an impact in Virginia was the failure to pass these two large bills. What responsibility do you feel that you have in that?” Berman asked, also referring to the bipartisan infrastructure bill that was passed by the Senate but has not been put to a vote in the House. 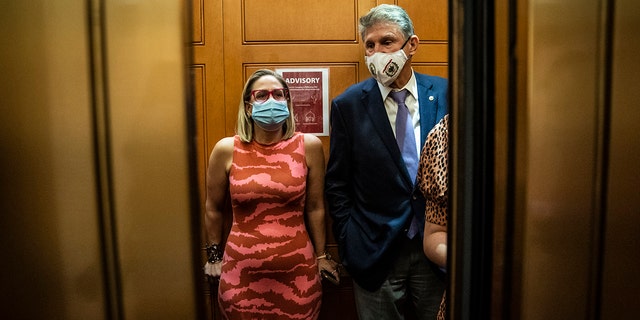 WASHINGTON, DC – SEPTEMBER 30: Sen. Kyrsten Sinema, D-Ariz., and Sen. Joe Manchin, D-W.Va., board an elevator after a private meeting between the two of them on Capitol Hill on Thursday, Sept. 30, 2021 in Washington, DC. (Photo by Jabin Botsford/The Washington Post via Getty Images)

Manchin responded that the infrastructure bill had been sitting in the House for months, but the spending bill was being pushed on a party line basis. He argued that Congress wasn’t supposed to work that way, with one party dictating the terms of a bill.

Berman turned back to the election, asking Manchin if he thought his hands were clean.

“The problem is, John, we’re divided. There is 50/50 … in the Senate. How many times does that happen? A complete split. Not that many times in history. So we don’t have the numbers that FDR had, or that Lyndon Baines Johnson had, in order to get some major, major legislation done. We don’t have those. So we have to come to realization what we have and deal in good faith that we can do at least something,” Manchin said.

The two later clashed over paid family leave, with Berman appearing to suggest Manchin was against it because of his opposition to the bill, and Manchin declaring he was for it, but that it should be addressed separately from the larger bill.