Congress stalling on a coronavirus stimulus package has become a blame game between Democrats and Republicans but "Fox News Sunday" anchor Chris Wallace told “Fox News Rundown” that the political see-saw is not helping anyone.

“As far as I'm concerned… for me, it's a pox on both their houses,” he said on the daily podcast.

“Here's a case where the country is in such desperate shape. You've got millions of people who are unemployed. They've now lost the $600 benefit. And there's some question as to whether they're going to get a $300 benefit. And if so, how soon? Small businesses, the PPP, the Payroll Protection Program money has run out, eviction protections have run out. You've got millions of people who are really going to suffer because of this.”

Wallace said he’s not interested in who’s at fault on the political spectrum and more concerned with the well-being of struggling Americans. Frankly, he said, he blames everyone. Wallace said there should be an agreement possible somewhere between the $1 trillion favored by Republicans and the $3 trillion in aid pushed by Democrats.

"Wouldn't you think that somewhere in between one and 3 trillion dollars you could arrive at some figure that would help people in trouble?” he said.

“So I frankly, I blame them all. I think it really stinks.” 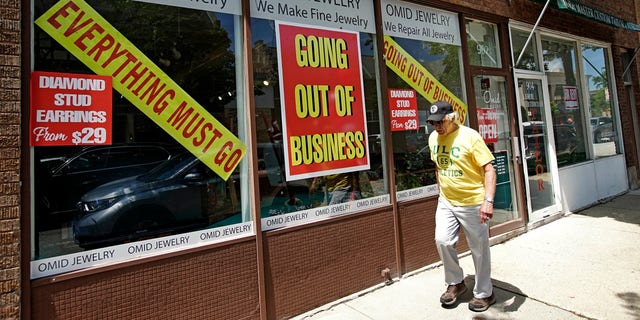 A man walks past a retail store that is going out of business due to the coronavirus pandemic in Winnetka, Ill., Tuesday, June 23, 2020. (AP Photo/Nam Y. Huh)

In terms of the election, Wallace said he doesn’t believe people will blame President Trump for the coronavirus’ impact on the economy, as vice-presidential nominee Kamala Harris had touted in her address Wednesday.