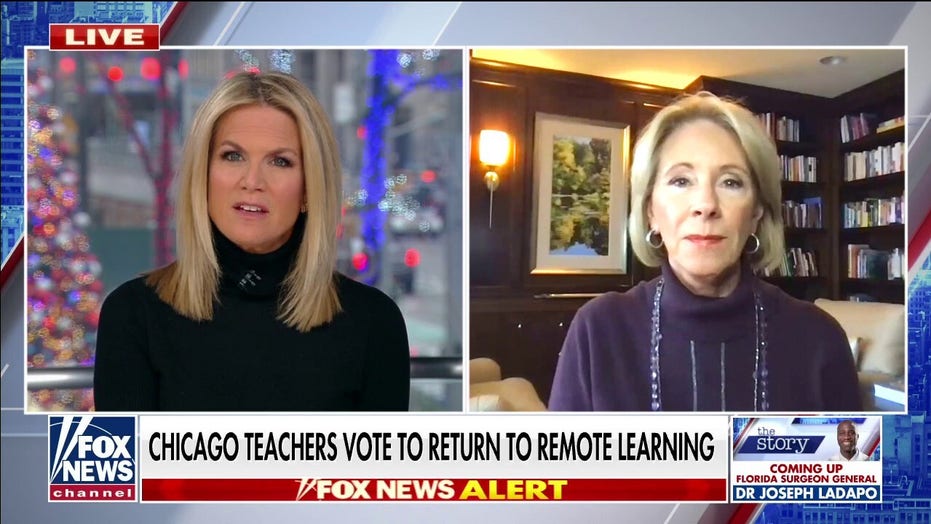 DeVos: Children in urban areas being harmed by teachers unions

Former secretary of education Betsy DeVos assesses how teachers unions are damaging city students during the COVID pandemic on ‘The Story.’

Within just two days of the holidays ending, Chicago Public School teachers were forced to illegally stop working by the Chicago Teachers Union.

Parents went from confused to outraged as their families endured the 10-day work stoppage that was created to supposedly safeguard the health and well-being of employees. Never mind that in every community, all Catholic and most private and charter schools were open without a hitch. 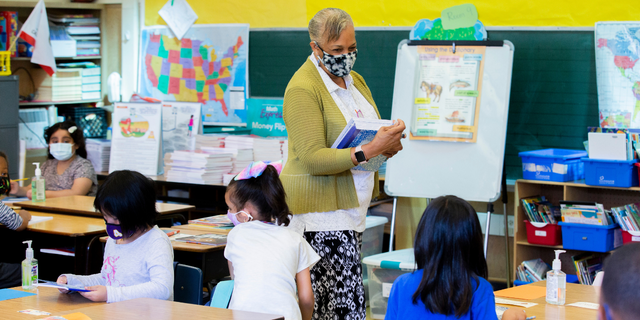 The same theater was playing out in Newark, New Jersey and Detroit, Michigan. By Wednesday, January 11th, 5000 schools around the country were still closed, despite CDC and government proclamations that this COVID variant was milder and kids and teachers could safely be in school.

Despite receiving billions of taxpayer dollars in federal COVID-relief funding to do precisely that, large urban school districts were unable to handle challenges that they’ve had plenty of time, experience and again, money, to figure out. The system failed our students again — as the song says — just when they needed them most. It’s unacceptable for any institution that fails to do the job it is paid to do.

But there’s a way out: Give parents the control to make their own decisions. When parents have power, stuff happens. 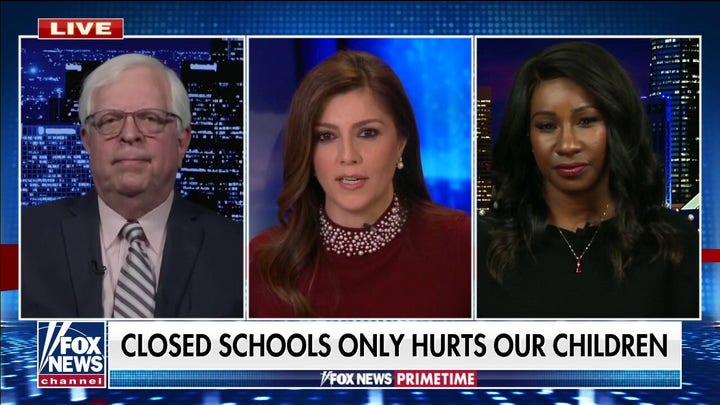 That’s the message that parents are sending loud and clear in Chicago, where thousands of them have inquired directly of the city’s private and charter schools about open slots. When the Center for Education Reform in partnership with a national philanthropist announced it was awarding $5 million in emergency grants to schools that could take CPS children, it was flooded with applications and stories of parents calling schools begging for slots. They know that students in the hands of educators not controlled by union contracts and large bureaucracies not only do better and get the attention they need but are safer. They also stay open even in a crisis.

Just look at Distinctive Charter Schools, the first recipient of the STOP Award’s Chicago Rescue Grants, to facilitate the influx of new student requests they’ve received since the start of these protests. These students, of which 89 percent are non-white and 85 percent are part of a free or reduced lunch program, show just a small picture of those being hurt most by the refusal of the teachers’ union to show up for students who need it most. 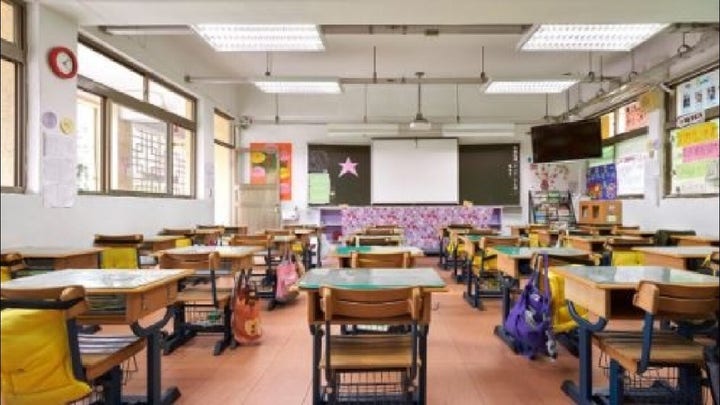 Or St. John de la Salle Academy, a small Catholic school that has occupied a spot for 68 years on the South Side of Chicago and continues to educate its students and opened on time when returning from the holidays, and is making room for another 30.

Or the small private faith-based Altus Academy in the East Garfield Park area where low-income minority families have turned for the opportunity to find an education that prepares them to enter and succeed in top tier public and private college prep high schools with the character necessary for success. With a rescue grant, they can accommodate another 25 students who have been knocking on their doors. 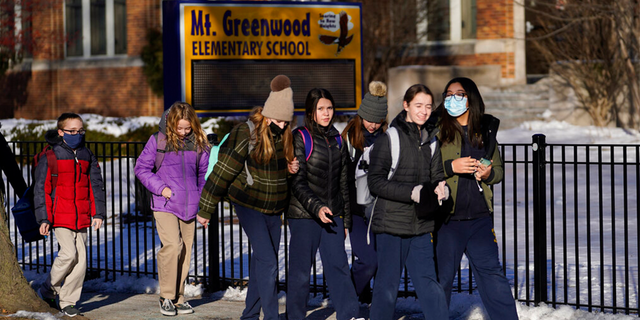 Students at the Mt. Greenwood Elementary School in Chicago depart after a full day of classes Monday, Jan. 10, 2022. As hundreds of thousands of Chicago students remained out of school for a fourth day students at the South Side school were back in classes as the school had enough staff to defy the union’s directive to teachers to stay home amid negotiations with the school district over COVID-19 safety protocols. (AP Photo/Charles Rex Arbogast)
(AP Photo/Charles Rex Arbogast)

These grants will continue until the funds are gone and at least 2,000 Chicago students are able to secure great new education opportunities away from the system that has failed them and their families for years. But the question remains: how can anyone, let alone a school district tolerate achievement where only 31 percent of 4th graders are proficient in math and 24 percent in reading, with scores worse for 8th graders, and only 26 percent of its 11th graders — our budding adults — able to read and do math at grade level?

And yet, Chicago unions walked out, as they do regularly, rather than work on fixing student achievement, and a deal was struck only after national pressure was brought to bear. Teachers in Chicago love to strike. They walked out in 1969, 1971, 1973, 1975, 1980, 1983, 1984, 1985, and 1987. And they threatened to strike eight other times during that time. We cannot trust systems to take care of our kids. We must trust parents, especially those who have been marginalized, considered incapable of making good decisions for their kids and are stuck in their local zoned public school because of their income, not by choice. 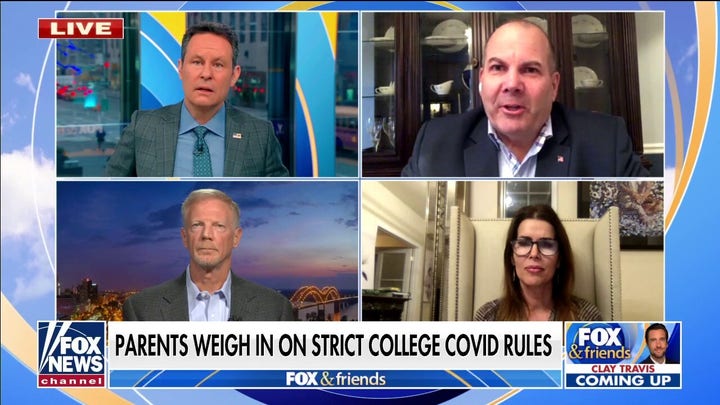 The public would do well to remember that during COVID, 18 states enacted laws creating or expanding education opportunity that put parents in the driver’s seat.

Even blue state Illinois trade unions backed the tax credit program that passed in 2017 and gives thousands of students the chance to attend a private school of choice. With this critical program, more than 22,000 students have been able to attend Catholic and other non-public schools that best meet their needs. With more support, more families seeking to ensure their students never lose out again on education will be able to give their kids a critical lifeline.

The recent school crisis has crystallized for people around the globe that a closed system meets no one’s needs, other than the illogical interests of adults who are defying science by staying out of school. Rather than use the pandemic to adapt, be flexible, innovative and allow more options for education, too many states are stuck in the 20th century.

While the current stalemate over in-person education has come to an end for the time being, parents and students alike are saying enough is enough as teachers failed to respond to their need for in-person learning. If the Chicago Public Schools and others couldn’t use their billions in federal COVID relief funding to date to ensure kids could be educated, who can?

The answer is simple. Parents.