The chancellor Rishi Sunak has held talks with nine of Britain’s union leaders to try to reassure them plans to phase out the government’s furlough scheme will be gradual and minimise the impact on unemployment.

In the run-up to an announcement next week about the future of the wage subsidy scheme, Sunak sought to dampen union concerns that the coronavirus support package would be brought to an abrupt halt at the end of June.

It comes as concerns grow in Westminster over the rising costs of the programme, with a cost to the public purse of between £3bn-4bn a week, amid fears it could match the level of spending on the NHS.

But he insisted that there would be no cliff edge to the furlough scheme and has been irked by stories – emanating from elsewhere in Whitehall – suggesting that workers were becoming “addicted” to wage top-ups worth up to 80% of monthly earnings up to a maximum of £2,500.

Unions have supported the furlough scheme since it was introduced just days after Britain went into lockdown in late March, seeing it as a way of preventing millions more workers being made unemployed.

Treasury officials are weighing up a range of options for the programme, which expanded quickly to cover more than 6 million workers within two weeks of being opened.

During the virtual meeting, unions expressed anxiety about the furlough scheme being abused by employers planning to make redundancies anyway, and said there was a need for workers to be properly protected when they return to work as the economy comes out of lockdown.

Discussions were also held about how the scheme could be made more flexible as the government begins the task of reopening the British economy after more than a month of tight controls on business and social life.

A spokesman for the TUC said the unions had a constructive meeting with Sunak, discussing the job retention scheme and raising concerns about the government’s back-to-work guidelines. 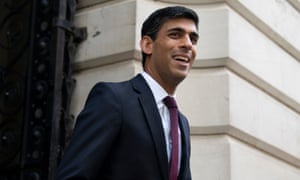 “We repeated our call for employers to publish risk assessments to give workers the confidence they will be safe. And we pressed for ministers to beef up enforcement to ensure companies who flout the law face sanctions.

“It is crucial government continues to consult with unions in the days ahead.”

With the furlough scheme costing an estimated £14bn a month, the chancellor is keen to get the economy moving as soon as the health experts say it is safe to do so.

Sunak made it clear he wanted to work with the unions so that when the government’s five medical tests are met the public feel safe to return to work and the virus can be controlled effectively.

Sources said he expressed concern on the call over the rising costs of the job retention scheme and that he wanted to keep working closely with unions and business leaders to shape the economic response to the coronavirus.

The meeting was held to open fresh lines of communication between No 11 and unions as the government begins to lift lockdown restrictions.

Relations during the Covid-19 outbreak have typically been through the TUC, although there was a desire to bring individual unions into direct dialogue to ease the reopening of the economy, including by involving those representing workers in some of the most heavily affected sectors, such as postal and retail employees.

Alongside tailoring the job-retention scheme to fit with government plans to reopen the economy, Sunak is expected to update employers next week before a crucial deadline.

Employers seeking to make more than 100 redundancies must run a 45-day consultation, meaning 18 May is the last point they could start this process before the furlough scheme closes at the end of June.

Among options believed to be under consideration for scaling back the support is allowing firms to cut workers hours to 15 a week with the taxpayer paying for the rest.

The shadow chancellor, Anneliese Dodds, said it was vital to introduce a greater degree of flexibility to the scheme to support a phased return to work.

Warning that switching off the scheme at the end of June would risk a flood of job losses, she said: “I will continue to try to work with government to facilitate this, and ensure that jobs and incomes are protected.”