It’s something straight out of an Eminem song – won’t the real Maria Fernanda please stand up? The mystery woman who gushed over Vice President Kamala Harris at a press conference Tuesday and had the internet abuzz turns out to be NOT who the White House thought she was.

At Harris’ press conference in Mexico City, one of the questions came from a person identified as a reporter for Univision and was widely mocked as the height of press fawning over the administration.

Harris, who had just met with Mexican President Andres Manuel Lopez Obrador, was addressing reporters when she turned to “Maria Fernanda of Univision.”

Fernanda went on to tell Harris that it was her honor to even ask the question. She said she is a naturalized U.S. citizen and got to vote for Harris in the last election.

“I voted for you,” she said. Harris smiled at the woman who was not seen on camera. “My question is, what would you say to these women, those mothers and also women of color on both sides of the border, farmers, many of them who I see every day as a message of hope but also as–what will you do for them in the next coming years?”

The question seemed to be fair and timely, but the initial praise spread rapidly throughout the media.

There’s only one problem.

Fernanda, whose full name is Maria Fernanda Reyes, is not a reporter for Univision and spoke with Fox News in a phone call late Tuesday. So why didn’t she immediately correct the moderator? Reyes says she got caught up in the moment and was surprised to be even called upon.

She pointed out that the moderator got her name correct, just not her organization. 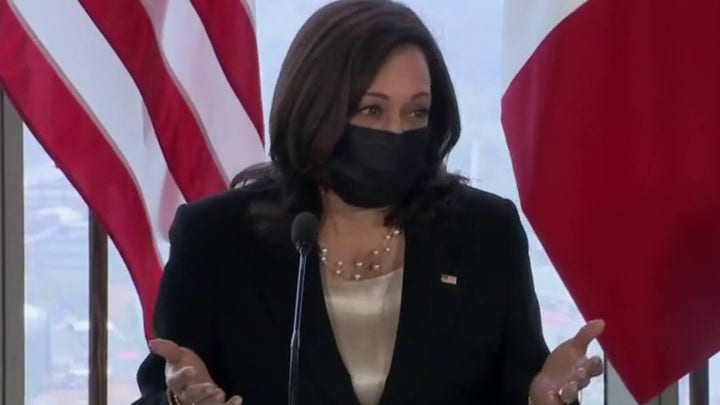 Harris’ deputy press secretary Sabrina Singh responded to Fox News’ request for comment simply with a link to a tweet from Symone D. Sanders, Harris’ chief spokesperson, saying the office is looking into the matter.

Reyes, a San Francisco Bay area entrepreneur, said she spends much of her time traveling and works with farmers in the U.S., Mexico and India. Reyes was in Mexico City Tuesday assisting Mayan farmers and working with the country’s poor to help them navigate COVID-19 when she was asked by fellow entrepreneurs to attend the vice president’s event.

Her Linkedin page identifies her as the founder of AdoptaHero with ties to Stanford University’s Latino Entrepreneurship Initiative.

“I am a fourth generation farmer and care about agriculture, food waste and supporting rural farmers, especially women rural farmers across the world,” her profile reads. “I’m on a journey to empower farmers to reduce food loss and food waste through technologies and education.”

Reyes said she was invited to the Harris event through connections she has through her work. She said like everyone else who was there, she was asked if she would be interested in asking Harris a question.

She said she was surprised by how quickly her question blew up. She said that she wished the substance of her question got more attention than the mistake.

“Everyone’s trying to twist it for their own agenda,” she said, pointing out that she is not overly interested in politics but wants to see conditions improve in the countries in the region.