The U.S. Capitol Police have bolstered their security efforts after learning of a possible plot by a militia group to breach the Capitol on Thursday, the police department announced Wednesday.

Police are “establishing a physical structure” and increasing manpower in response to the potential threat, according to a statement from law enforcement. The statement did not name the militia group but said the group was “identified.”

“We are taking the intelligence seriously,” the police said in their statement. “Due to the sensitive nature of this information, we cannot provide additional details at this time.”

The announcement comes as followers of the QAnon conspiracy theory prepare for former President Donald Trump to return to office, which they believe will happen Thursday.

QAnon believers were certain that “The Storm” would transpire on Inauguration Day in January, with President Joe Biden and his so-called deep-state cronies being rounded up en masse and Trump publicly returning to power. When that didn’t happen, many desperate Q-loyalists jumped to move the goalposts: They claimed Trump would instead be sworn in on March 4 — the date of U.S. presidents’ inaugurations up until 1933.

QAnon chat rooms on Telegram, which has become a haven for deplatformed members of the Q community, are brimming with anticipation.

“March 4 is the date our Constitution says is (always has been) Inauguration Day,” someone else explained in an even bigger QAnon Telegram group.

“Donald Trump will return as the 19th President of the United States on March 4, 2021,” added another, referencing the QAnon theory that holds Ulysses S. Grant, America’s 18th president, as the nation’s last legitimate leader.

“Trump will be back on March 4,” a man argued in another channel popular among QAnon backers. “By Constitution. Read it. Read a book and educate yourself.” 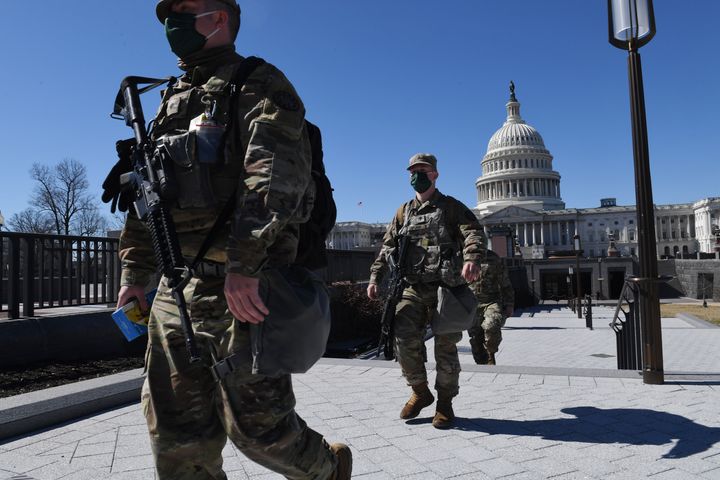 But after QAnon was wrong about Jan. 20, others are less confident.

“Is the March 4 inauguration [a] false flag?” someone asked in the 20,000-member QAnon channel. “If March 4 comes and goes we all have been duped,” wrote another. “WW3 is not far off get prepared.”

In a joint bulletin from the FBI and Department of Homeland Security, officials warned Wednesday that domestic violent extremists have “discussed plans to take control of the U.S. Capitol and remove democratic lawmakers on or about 4 March.”

Timothy Blodgett, acting sergeant-at-arms for the House of Representatives, sent a memo to all members of Congress on Wednesday, warning of potential protests “surrounding what some have described as the ‘true Inauguration Day.’” He also said USCP had obtained new and “concerning” information indicating additional possible threats to the Capitol could unfold between Thursday and Saturday.

USCP has been on high alert since pro-Trump rioters stormed the Capitol as Congress was voting to certify the presidential election on Jan. 6. At least five people died that day, including one police officer. Two other police officers who responded to the attack died by suicide days later.

The House moved quickly to impeach Trump for inciting the deadly riot. But the former president, who for months has repeatedly lied about the election being “stolen” from him, was acquitted in the Senate last month. A majority of senators ― all 50 Democrats and seven Republicans ― found Trump guilty, but a conviction requires a two-thirds majority of votes.

Trump has not released any statements calling for Thursday’s anticipated demonstrations to be peaceful. Instead, he has continued to claim Democrats rigged the election against him and on Sunday hinted at a third presidential run during a speech at the annual Conservative Political Action Conference.

Justice Department investigations into the Capitol riot have led to the arrests of dozens of Trump supporters, QAnon followers, current and former law enforcement officials and state lawmakers. U.S. prosecutors said in a recent court filing that the Proud Boys, a far-right extremist group, helped organize and lead the attack.

Congress has launched investigations into the security failures that allowed hundreds of rioters to breach the Capitol on Jan. 6. Maj. Gen. William Walker, commanding general of the D.C. Guard, said in his prepared testimony before Congress on Wednesday that senior Pentagon leaders were slow to approve USCP’s request for backup during the riot.