The West Australian iron ore sector is bracing for the COVID impact – as a two-week countdown begins to the opening of the state and the inevitable infiltration of the virus into the remote mine sites that supply Australia’s largest export.

Whether this will result in the equivalent of a ‘fender bender’ or whether it will be a train wreck for West Australia’s producers remains to be seen.

The large iron ore companies including BHP and Rio have already tasted the impact the virus has had on operations – from the deprivation of skilled workers coming from eastern states to the scarcity of train drivers and supply chain blockages, and in BHP’s case the disruption to its Queensland and NSW coal mines. 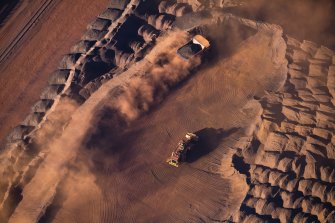 But when West Australian Premier Mark McGowan capitulated and announced the opening of the state, iron ore producers understood the challenges were about to get a whole lot larger.

That said, when McGowan’s road map opening plan was announced on December 13, NSW had 55 cases of Omicron and Victoria had five. The speed and infectiousness of this variant would not have been appreciated by McGowan or any other government.

If the rates of absenteeism among a range of industries in other states is any guide the impact will be meaningful. Companies in industries from retail to airlines are struggling to supply goods and services thanks to staff shortages resulting from employees with COVID or in isolation.

An outbreak on a remote site could result in widespread infection and/or isolation of a portion of the whole group.

One need look no further than cancelled flights, reduced opening hours in retail and hospitality, and a patchwork of empty supermarket shelves to understand the staff crisis wrought by the now-dominant COVID variant.

Experience has shown that masks, social distancing and vaccinations can assist but not stop the Omicron variant from taking hold in large numbers.

Dealing with mine workers located in remote campsites presents a whole new set of challenges as these workers live and work together during their shifts.

An outbreak on a remote site could result in widespread infection and/or isolation of a portion of the whole group.

An outbreak of the Delta virus last year at the Newmont Granites gold mine in the Northern Territory resulted in a two-week complete shutdown of the operation.

During the first wave of the pandemic Brazil’s mega iron ore mining company, Vale, was heavily struck by COVID which severely curtailed supply and contributed to a spike in the price of the metal.

This week both BHP and Rio Tinto acknowledged the opening of West Australia could be disruptive to production. While Rio’s warning was relatively strong, BHP’s tone suggested it was more “alert” than “alarmed”.

But the sensitivities to staff shortages can be severe. By way of example, a dearth of train drivers contributed to a 5 per cent fall in iron ore production in the September quarter for BHP. However, BHP is sticking to its production forecasts for this financial year despite the potential for absenteeism.

Staff shortages across iron ore businesses have been further exacerbated by workers who were unwilling to vaccinate and quitting the industry – in Rio’s case this amounted to 2 per cent and brought to 10 per cent the recent staff churn at the company.

And the companies need to be particularly vigilant about protecting the health of their large Indigenous workforces.

How this will bleed into Australia’s supply and iron ore export levels depends on severity and duration. It is anticipated that even if there are widespread outbreaks at mining operations the supply chain issues will be longer dated.

And the costs associated with supply chain disruption and competition for staff will also affect profitability.

But meaningful, even short-term disruption, to supply could have a positive effect on the price of iron ore – which in turn could offset the negative impact of lower volumes mined.