Rep. Boebert responds to being called out for gun collection display

Republican Colorado Rep. Lauren Boebert calls on House Speaker Nancy Pelosi to “tear down” security fencing around the Capitol in a new ad.

Miles of fencing was put up around the Capitol and thousands of National Guard troops were deployed to guard the surrounding area after the Jan. 6 riot that resulted in five deaths and hundreds of arrests, but now, lawmakers, D.C. residents and the Capitol Police oversight board are calling for the razor-wire fencing to come down.

“You protect what you love,” Boebert says in the ad as she walks in front of the Capitol building. “President Trump built a big, beautiful wall because he loves America because he wanted to secure our country. … Democrats — they fought him every step of the way. And now, welcome to Fort Pelosi, where Democrats decry walls from within their own heavily guarded, razor-wire wall.”

She continues: “Democrats don’t want to protect you because they don’t care about you, but they’ll spare no expense protecting themselves. … Madam Speaker, tear down this wall.”

Some commentators criticized the video, noting that Boebert tweeted Pelosi’s whereabouts on Jan. 6 as a violent mob broke into the Capitol. Boebert claimed she was repeating only what people could see on TV.

Others took issue with the gunshot sound effect at the end of the ad as the Colorado congresswoman’s signature appears on the screen. Boebert, who owns a gun-themed restaurant in her home state, has pushed for concealed carry rights for lawmakers working at the Capitol. 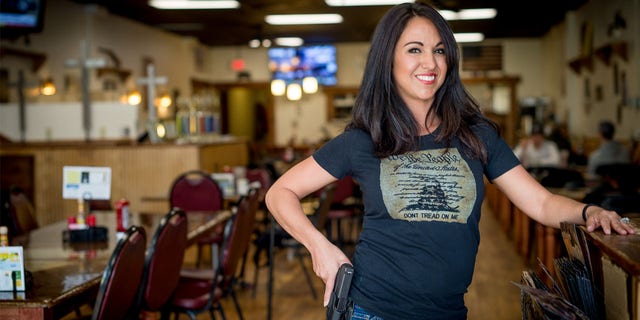 The new ad comes after retired Army Lt. Gen. Russel Honoré published a 15-page report with recommendations, including a “Quick Reaction Force,” to bolster security at the Capitol to combat threats more than two months after a mob broke into the building in early January, with many participants hoping that the result of the 2020 presidential election would be overturned.

Democratic D.C. Del. Eleanor Holmes Norton in a Monday interview on WMAL’s “Mornings on the Mall” radio show condemned Congress for being “afraid of its shadow” after threats of a potential March 4 Capitol breach did not come to fruition.

“I don’t think there is the kind of threat that could keep us away from the Capitol, razor wire on the Capitol or fencing on the Capitol,” she said. “That’s why Congress has got to step in itself so that… we don’t militarize our Capitol.”