In a Twitter post, the former president included a photo of himself with Clinton, as she addressed an audience around the time of her nomination.

“With the passing of Ruth Bader Ginsburg, America has lost one of the most extraordinary Justices ever to serve on the Supreme Court. She was a magnificent judge and a wonderful person — a brilliant lawyer with a caring heart, common sense, fierce devotion to fairness and equality, and boundless courage in the face of her own adversity.

“Her 27 years on the Court exceeded even mu highest expectations when I appointed her. Her landmark opinions advancing gender equality, marriage equality, the rights of people with disabilities, the rights of immigrants, and so many more moved us closer to “a more perfect union.” Her powerful dissents, especially her ringing defense of voting rights and other equal protection claims, reminded us that we walk away from our Constitution’s promise at our peril. And she did it all with kindness, grace, and calm, treating even her strongest adversaries with respect.

“Hillary and I will miss her terribly, and will be forever grateful for her life’s work and her friendship. Our thoughts and prayers are with Jane, James, their families, and everyone across America who looked to Justice Ginsburg for guidance, inspiration, and strength.”

Hillary Clinton also issued a statement on Twitter: "Justice Ginsburg paved the way for somany women, including me," she wrote. "There will never be another like her. Thank you RBG."

Bill Clinton’s nomination was the first made by a Democratic president in 26 years.

Prior to her nomination, she had argued six key cases before the court in the 1970s, winning five, with the decisions influential on the expansion of rights for women.

“Ruth Bader Ginsburg does not need a seat on the Supreme Court to earn her place in the American history books,” Clinton said at the time of her appointment. “She has already done that.” 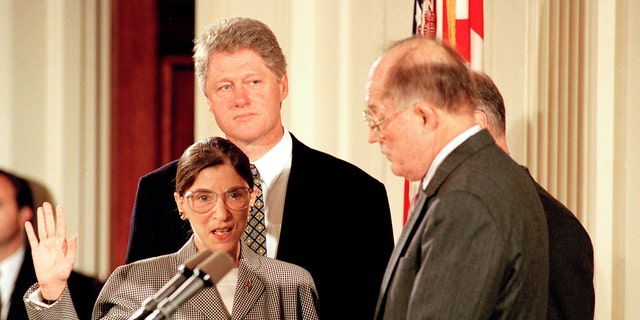 Aug. 10 was the 27th anniversary of Ginsburg’s first day on the Supreme Court. Her appointment followed the the retirement of Justice Byron “Whizzer” White, who had been appointed by former President John F. Kennedy.

Ginsburg was the second woman named to the Supreme Court, following Justice Sandra Day O’Connor, who was nominated by former President Ronald Reagan in 1981.

After O’Connor retired in 2006, Ginsburg was the only woman on the court until former President Barack Obama appointed Justice Sonia Sotomayor in 2009. They were later joined by Justice Elena Kagan in 2010.