Not everyone close to Joe Biden is on board with the president-elect's recent message of political unity.

Biden's younger sister and close political adviser Valerie Biden Owens rejected the idea that her brother could work alongside President Trump in an interview with Axios that aired Sunday, indicating that unity between Biden and Trump is likely not within the realm of possibility.

"Why?" Owens said when asked whether Biden and Trump could work together in the future. "It's a moot point. He's never going to see Donald Trump again. Donald Trump is going off the stage on Jan. 20, and that's history, that's past. Joe's not going to talk about Donald Trump. Who cares? He cares about the American people."

She added: "Donald Trump is not in my brother's focus."

Biden will also talk with "progressives or conservatives or Republicans or liberals or Democrats and independent" and will "bring respect back to governing," she said, according to Axios.

Owens noted during the interview that Biden could seek a second term in 2024, saying the president-elect is "transitional in that he's bringing in all these young people" so that the United States is "not a divided country."

Former acting White House Chief of Staff Mick Mulvaney said Thursday that Trump will also "likely" run again in 2024 if his campaign's legal challenges do not alter the projections of Biden as the winner. 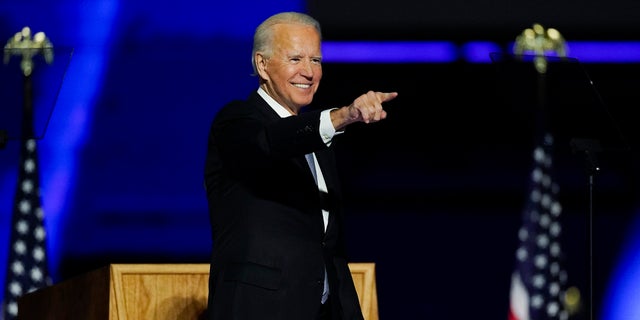 President-elect Joe Biden points to the crowd as he stands on stage after speaking Saturday, Nov. 7, 2020, in Wilmington, Del. (AP Photo/Andrew Harnik)

While Biden and Vice President-elect Kamala Harris have previously been critical of Trump and his policies, they have recently avoided direct criticism of the president, who earned nearly 71 million votes.

INGRAM: BIDEN 'ORDERING' AMERICANS AROUND WITH COVID MANDATES COULD 'BACKFIRE'

"I pledge to be a president who seeks not to divide but unify, who doesn't see red states and blue states, only sees the United States," Biden said Saturday while giving a speech after he was named winner of the 2020 presidential election.

He then directed his message toward Trump supporters, specifically: "I understand the disappointment tonight. But now let's give each other a chance. It's time to put away the harsh rhetoric, lower the temperature… To make progress we have to stop treating our opponents as our enemies. They are not our enemies, they are Americans."

Neither Biden nor Harris has made any kind of suggestion, however, that working with the president in an effort to better understand his loyal voter base could be a possibility.