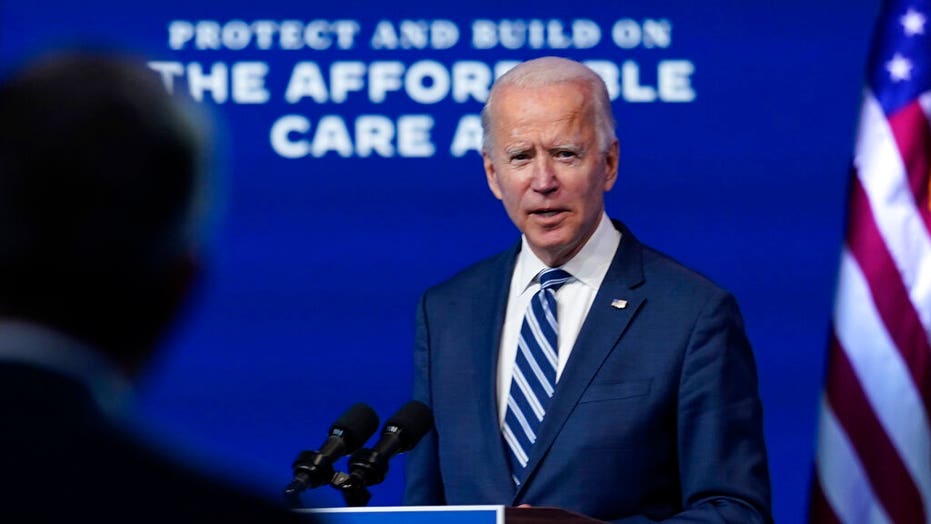 President-elect Joe Biden has laid out several ways to combat the coronavirus at the beginning of his term, including working with state and local leaders to enact a national mask mandate — but for now, not every state has committed to help.

Fox News reached out to governors' offices across the country to ask if they'd help enforce a mask mandate. While the majority of America's governors already have issued statewide mask requirements, 16 states have not — and nearly half of their governors have suggested they would defy orders from the Biden administration to implement such a mandate.

“It’s time to end the politicization of basic, responsible public health steps like mask-wearing and social distancing,” Biden said on Monday during a speech in Wilmington, Del. “The single most effective thing we can do to stop the spread of COVID: Wear a mask.”

With more than 10 million confirmed cases of COVID-19 and 239,000 deaths in the U.S., Biden's transition team unveiled this week a 13-member task force to address the virus, as well as a website outlining the new administration's plan to combat the pandemic.

Although the former vice president initially said he would use executive power to require Americans to wear a mask in public, he's since backed away from that stance, instead saying he would appeal to governors and mayors to adopt a mandate.

"You can go to every governor and get them all in a room, all 50 of them, as president, and say, 'Ask people to wear the mask,'" Biden said during the ABC town hall hosted in October.

Here's a closer look at the states that may not adopt a mask mandate under a Biden presidency:

Alaska's governor did not respond to a request for comment, but the state currently does not have a mandate in place regarding masks.

Several of the state's big cities, including Anchorage and Juneau, have adopted local mandates, but there is no sweeping requirement.

CLICK HERE FOR THE LATEST FOX NEWS REPORTING ON THE CORONAVIRUS

Gov. Mike Dunleavy, a Republican, has previously resisted imposing one and maintains that such decisions are best made by local governments.

Arizona's governor's office, which did not respond to a request for comment, has not installed a mask requirement in the state.

“Just look at what happened in Arizona. Republican governor initially tried to bar local governments from implementing mask mandates in their communities,” Biden said in mid-October.

Ducey gave authority to local governments in mid-June to determine whether they needed a mask mandate.

Florida's governor's office did not respond to a request for comment. The state has never imposed a statewide mandate.

Several Republican lawmakers suggested this week it was unlikely to happen, even if Biden reaches out to Republican Gov. Ron DeSantis.

The Peach State does not have a mandate in place, although Georgians are "strongly encouraged" to wear face coverings when possible.

Republican Gov. Brian Kemp's office did not respond to a request for comment.

Republican Gov. Brad Little's office did not respond to a request for comment. The state's biggest cities currently require masks in public, but there is no statewide mandate.

Republican Gov. Kim Reynolds, whose office did not answer a request for comment, has previously said that cities and counties do not have the authority to enact mask mandates.

Mississippi Gov. Tate Reeves, a Republican, told Fox News that pressure from the Biden administration for the state to adopt a mask mandate would "have no impact."

“Mississippi has always developed our own protocols, and they’ve worked," Reeves said in a statement. "We’ve had a statewide mask mandate when the numbers reached a crisis-level, and we’ve lifted it when the numbers no longer justified it. This is the role of governors—not a president. ‘State managed, federally supported’ is how we’ve always dealt with crises in this country, and it’s not changing.”

Several cities and counties in Missouri have enacted mask mandates, but there is no statewide requirement. Republican Gov. Mike Parson's office did not respond to a request for comment.

During a press conference this week, Gov. Pete Ricketts, a Republican, said that he would not implement a mandate if asked to do so by the president-elect.

“I would not be going along with a mask mandate,” Ricketts said during a Monday. “I’d be keeping the same policy.”

Masks are currently required for both clients and staff at barbershops, salons and other personal-care businesses, and are recommended for restaurant employees. Lincoln and Omaha have both adopted broader local orders that require people to wear face coverings in most indoor spaces.

Gov. Chris Sununu, a Republican, who was overwhelmingly re-elected last week thanks in part to his strong approval rating on the coronavirus, told Fox News that he supported allowing local communities to make their own decisions regarding a mandate.

"New Hampshire has managed this crisis well and I have supported local communities in their decision to enact mask mandates, but a one-size-fits-all approach out of Washington is not the answer to combatting this crisis," he said. "It’s ensuring that each state has flexibility to attack this pandemic in a targeted, data-driven way.”

The North Dakota governor's office declined to comment. The state currently does not have a mask mandate in place.

Gov. John Stitt, a Republican, has resisted calls for a statewide mask mandate. His office did not respond to a request for comment this week.

Gov. Henry McMaster, a Republican, has been clear from the beginning of the pandemic: he will not issue an unenforceable statewide mandate. Local officials – who best know their communities, businesses and needs – are best suited to make those decisions and enact any ordinances they deem necessary.

South Dakota recommends that individuals wear a face covering in public, but it has not made masks mandatory. The governor's office did not respond to a request for comment.

Several jurisdictions in Tennessee have adopted mask mandates, but the state has not done so. The governor's office did not respond to a request for comment.

Wyoming does not have a mask requirement in place, and has said installing such a mandate is the state's decision — not the federal government's.

"I believe any decision on a statewide mask mandate would be Wyoming's to make," Gov. Mark Gordon, a Republican, said in a statement to Fox News.

The following states already have some form of a mask mandate in place: