President Biden is set to embark on his first trip overseas since taking office Wednesday, a journey in which he will meet with G-7 and NATO allies to discuss ways to address the coronavirus pandemic and an increasingly aggressive China and Russia.

Biden is set to arrive in the United Kingdom Wednesday night. His first order of business will be a bilateral meeting with British Prime Minister Boris Johnson on Thursday, before joining G-7 leaders for the group’s summit over the weekend.

Biden is also expected to meet with Queen Elizabeth II at Windsor Castle, before traveling to Belgium for the NATO Summit, and later to Geneva for a face-to-face meeting with Russian President Vladimir Putin.

“This trip is about realizing America’s renewed commitment to our allies and partners,” Biden wrote in an op-ed previewing his trip in The Washington Post over the weekend. “Whether it is ending the COVID-19 pandemic everywhere, meeting the demands of an accelerating climate crisis, or confronting the harmful activities of the governments of China and Russia, the United States must lead the world from a position of strength.”

On China, the president is set to direct his focus on competitiveness in the marketplace, and the origins of the coronavirus pandemic. The president, last month, said U.S. intelligence officials had coalesced around two “likely scenarios” for the origin of the pandemic — zoonotic transmission or a leak from a laboratory in Wuhan. Biden gave the intelligence community 90 days for additional review to get to the bottom of how the pandemic began.

The president, in his op-ed, said that the world’s major democracies should invest in infrastructure to provide a “high-standard alternative to China for upgrading physical, digital and health infrastructure that is more resilient and supports global development.”

The Biden administration has warned that China “has rapidly become more assertive” and “is the only competitor potentially capable of combining its economic, diplomatic, military and technological power to mount a sustained challenge to a stable and open international system.”

“As new technologies reshape our world in fundamental ways, exposing vulnerabilities like ransomware attacks and creating threats such as invasive AI-driven surveillance, the democracies of the world must together ensure that our values govern the use and development of these innovations – not the interests of autocrats,” Biden wrote.

As for ransomware attacks, the White House this week said the topic is a “national security priority,” specifically related to critical infrastructure in the U.S., and maintained that the president will “treat it as such in the G-7 and on every stop along the way” on his trip.

The latest ransomware assault last week shut down the U.S.-based meat plants of the world’s largest meatpacker, Brazil-based JBS. The White House said the hack was likely carried out by a criminal group based in Russia. That attack came just weeks after the largest U.S. fuel pipeline, the East Coast’s Colonial pipeline, was targeted by a criminal group originating in Russia.

The Biden administration declined to condemn Putin after the Colonial Pipeline attack and stressed that the U.S. did not believe Russia’s government was involved. However, shifting tone, the White House later said Putin and the government have “a role to play in stopping and preventing these attacks.” 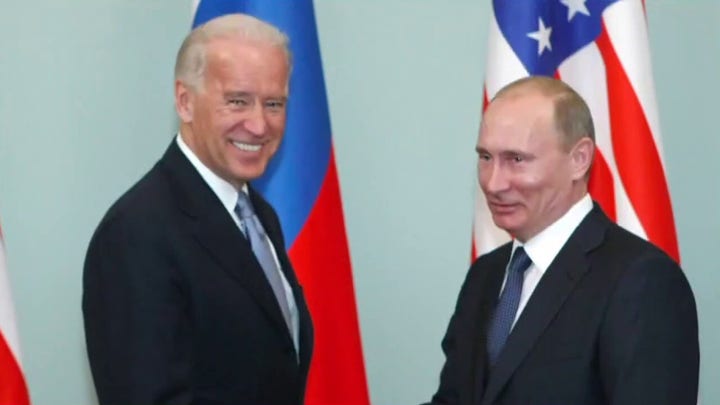 Biden also expected to raise the issue of Russia-based ransomware attacks with Putin during their summit on June 16 in Geneva.

In terms of timing of the Biden-Putin summit, Sullivan said it is “hard” to “find a better context” for a meeting with the Russian president, after Biden will have spent time with allies from democracies around the world.

White House national security adviser Jake Sullivan this week said that the relationship between the U.S. and Russia is not one of “trust,” but a relationship “of verification” and “of clarifying what our expectations are, and about laying out—if certain kinds of harmful activities continue to occur, there will be responses from the United States.”

Sullivan said that Putin will be able to “understand fully where the U.S. stands, and what we intend to do.”

“We believe, fundamentally, that our capacity to ensure that harmful and disruptive activities against the United States do not continue unabated is to be able to communicate clearly, directly, not by negotiating in public, but by explicating our position and our capabilities in private,” Sullivan said.

Sullivan added that the Biden administration has already dealt with a range of issues with Russia, including their move in imposing “costs for election interference and solar winds,” and the “range of issues in the cyber and ransomware domain.”

“It is an effective and appropriate context and time period to have this summit,” Sullivan said.

Biden and Putin are expected to discuss a range of issues, including Iran and North Korea’s nuclear capabilities, Syria, the Arctic, strategic stability, arms control, climate change, COVID-19 and more.

The U.S. and Russia have long competed on a global scale, and where the U.S. exceeds Russian capabilities, as in the case with the U.S. military, Putin has relied on other factors to bolster Russian dominance – including cyber-strikes.

Meanwhile, Biden and Putin are also expected to again discuss the intent of the U.S. and Russia to pursue a “strategic stability dialogue on a range of arms control and emerging security issues” to build on the extension of the New START Treaty, according to the White House. The START Treaty places verifiable limits on all Russian deployed intercontinental-range nuclear weapons. The treaty began on Feb. 5, 2011, and according to the State Department, the U.S. and the Russian Federation have agreed to extend it through Feb. 4, 2026.

Biden has sought to pressure Russia though economic sanctions, imposing penalties last week on Russian companies and ships for their work on a natural gas pipeline in Europe, though the Biden administration spared the German company overseeing the project – leading to frustration from both Republican and Democratic lawmakers.

And last month, the Biden administration imposed a raft of new sanctions on Russia for its attempted interference in the 2020 election and a Kremlin-linked cyberattack that penetrated multiple federal agencies.

The measures sanctioned 32 entities and individuals who sought to influence the outcome of the November election last year under orders from the Russian government. The White House also expelled 10 Russian diplomats working in Washington, including some intelligence officers.

Meanwhile, Sullivan said Monday the president is going on his trip to Europe “from a position of strength,” and with the intent to “show the rest of the world what America is capable of.”

“We will show that the U.S. retains the profound capacity to help rally the world’s democracies to solve big problems,” Sullivan said.