Emphasizing the importance of their mission ahead in a quickly changing world, President Biden told graduating Coast Guard cadets on Wednesday that “we need you badly – that’s not hyperbole.”

Biden, giving his first commencement address as the nation’s commander in chief, urged the U.S. Coast Guard Academy’s 2021 graduating class to “go out and be the future” and that their “mission will become even more global and even more important.”

Speaking at the Coast Guard Academy’s campus in New London, Connecticut, the president stressed that “the world is changing. We’re at a significant inflection point,” as he spotlighted “disruptive nations” such as China and Russia as a top challenge facing the U.S. 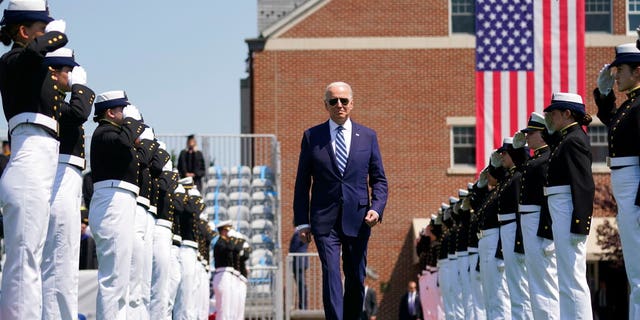 After Biden’s joke at the expense of the Navy appeared to fall flat with the cadets, he quipped “you are a really dull class. Come on, man. Is the sun getting to you? I would think you’d have an opportunity when I say that about the Navy to clap.”

And following a long-standing tradition, he absolved any cadets with minor conducts offenses. “You have no idea how much I wish I had been able to do that at my graduation,” the 1965 University of Delaware graduate joked.

For Biden, it was a return visit to the academy, where he gave the 2013 commencement address when he served as vice president.

Presidents and vice presidents deliver commencement addresses at the nation’s military academies on a rotating schedule. Later this month Vice President Kamala Harris will give the commencement speech at the U.S. Naval Academy in Annapolis, Maryland.