The emotional visit to the house, located on Scranton’s North Washington Avenue and currently occupied by Anne Kearns, concluded with Biden scrawling a message on the living room wall.

“From This House to the White House, with the Grace of God,” the former vice president wrote, along with his signature and the date.

The moment was captured for posterity on Twitter Tuesday by Axios political reporter Alexi McCammond. She also included a throwback image from 2008 showing Biden signing his bedroom wall when he was former President Barack Obama’s running mate.

Biden also paused to speak briefly with reporters on the home’s front lawn, and indicated that he hadn’t spoken with President Donald Trump thus far on Election Day.

Prior to his hometown visit, Biden attended mass with his wife, Jill Biden, and granddaughters at St. Joseph on the Brandywine in Wilmington, Delaware. He also visited the nearby gravesite of his son, Beau Biden, who died in 2015 of brain cancer, as well as the graves of his first wife and daughter, who were killed in an automobile accident in 1972. 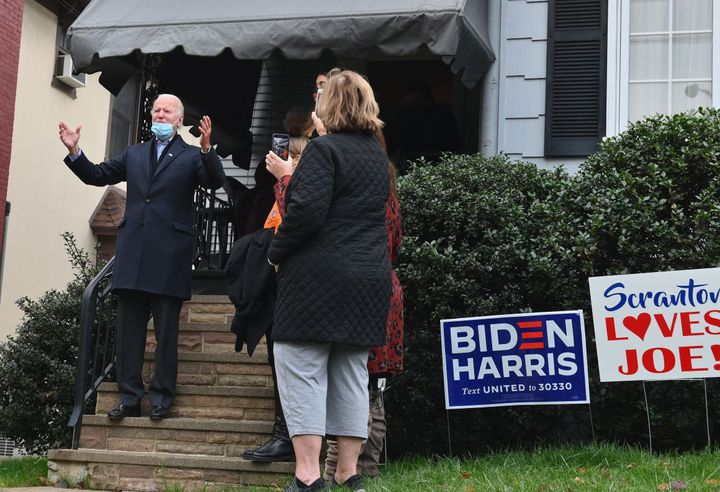 He’s referenced his Pennsylvania upbringing a number of times in recent interviews, describing Scranton as a place that continues to shape his career in public service.

“No matter where I’ve gone in life, I’ve always been led by the values that Scranton instilled in me at a young age — values of hard work, faith and a commitment to the middle class,” he told USA Today last month.