President Biden on Friday said the country is “still digging out of an economic collapse” amid the coronavirus pandemic, but that the U.S. is on the “right track,” as the administration reported that the economy created just 266,000 jobs in April, and saw rising unemployment.

Biden, speaking from the White House, said he took office during a “once-in-a-century pandemic and a once-in-a-generation economic crisis.”

He continued, “We knew this wouldn’t be a sprint—it would be a marathon.”

The unemployment rate also unexpectedly rose to 6.1%. While it’s still well below the April 2020 peak of 14.7%, it’s about twice the pre-crisis level, the Labor Department announced in its monthly payroll report, released Friday morning. Economists surveyed by Refinitiv said they expected the report to show that unemployment fell to 5.8% and the economy added 978,000 jobs.

“You might think we should be disappointed,” Biden said of the numbers, but claimed the “American Rescue Plan,” which passed in late March, “was designed to help us over the course of a year—not 60 days.” 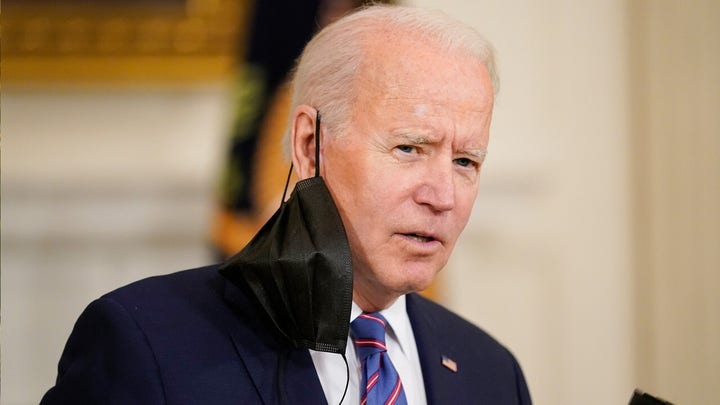 “Today, there is more evidence our economy is moving in the right direction,” Biden said, while acknowledging, however, that “it is clear we have a long way to go.”

Biden, though, touted his administration, saying 1.5 million jobs have been created since he took office.

“This is progress. This is a testament to our new strategy,” Biden said. “We’ve got work to do, to state the obvious, we have work to do.”

She went on, “We need to take bold action to Build Back Better from this crisis by investing in our nation, our workers and our families.”

An April report by Moody’s Analytics, an economic research firm, projected that the U.S. would add 16.3 million jobs through 2030 regardless of Biden’s plan passing. Its study also revealed that Biden’s plan would only truly add 2.7 million jobs if implemented, for a total of 19 million.