President-elect Joe Biden plans to nominate Rep. Deb Haaland (D-N.M.), an enrolled member of the Pueblo of Laguna tribe, a source familiar with the pick confirmed to HuffPost.

The Interior Department employs more than 70,000 people and manages 500 million acres of federal land — roughly one-fifth of the U.S. — including the 62 national parks. It also oversees the Bureau of Indian Education and is responsible for honoring the government’s trust responsibilities to tribes.

“The nomination of Rep. Deb Haaland ― a champion of the environment and of Native people ― heralds a new era of conservation, progress, and healing in the Department of the Interior that is long overdue,” Gussie Lord, a member of the Oneida Nation of Wisconsin and managing attorney of Earthjustice’s Tribal Partnerships Program, said in a statement.

Native American tribal leaders and dozens of lawmakers ― Democrats and Republicans ― have been urging Biden to select Haaland for the position.

“She has been a champion for our environment and public lands and has worked tirelessly to improve the nation-to-nation relationship between the United States and Indian tribes,” more than 50 House Democrats wrote in a Nov. 16 letter to the president-elect.

But in comments to The New York Times this month, anonymous “Biden advisers” painted Haaland as unqualified for the job and instead pitched Michael Connor, a veteran of the Interior Department, as a better candidate.

As HuffPost previously reported, the snubs outraged tribal groups and Haaland’s other supporters. Biden transition officials insisted that the attacks did not come from anyone in a position to speak on behalf of the incoming administration.

Haaland has been on Biden’s shortlist of potential picks for weeks, along with Sen. Tom Udall (D-N.M.) and Connor, who served as Interior’s deputy secretary under President Barack Obama. This week, Haaland emerged as the front-runner, but sources told HuffPost that Speaker Nancy Pelosi (D-Calif.) and House Majority Leader Steny Hoyer (D-Md.) were pushing back on Biden plucking her from the House, given Democrats’ single-digit majority in the chamber.

The House leaders appeared to have relented on Wednesday when Pelosi unexpectedly put out a statement voicing her support for Haaland.

“Congresswoman Deb Haaland is one of the most respected and one of the best Members of Congress I have served with,” Pelosi said, adding that “if she is the President-elect’s choice for Interior Secretary, then he will have made an excellent choice.” 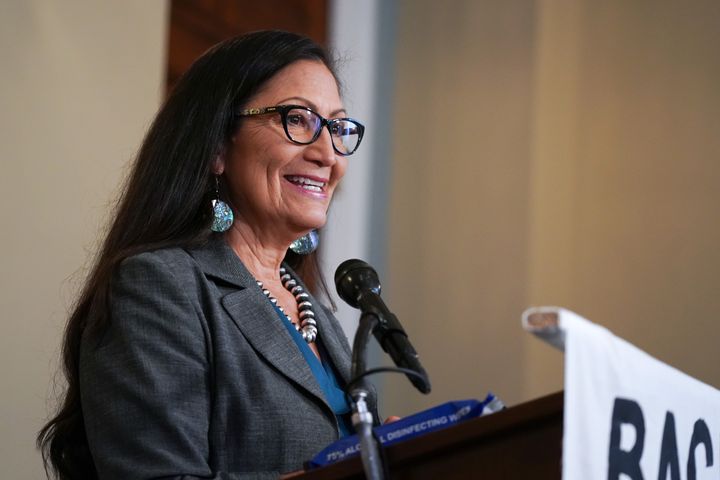 A former chairwoman of the Democratic Party of New Mexico, Haaland currently heads one of five subcommittees of the House Natural Resources Committee, which has oversight over the Interior Department. She has been a fierce critic of the Trump administration’s pro-industry agenda on federal lands and is a vocal supporter of the Green New Deal resolution introduced in Congress last year. That resolution lays out a progressive framework to rein in greenhouse gas emissions, including specific language about protecting public lands and waters and restoring threatened ecosystems.

Last month, Haaland told HuffPost that she would “of course” be interested in the job and acknowledged the significance of putting a Native American woman in charge of the agency that oversees lands that Native Americans originally occupied and had forcibly taken from them.

If confirmed, Haaland would take the Interior reins from David Bernhardt, a former oil and agricultural lobbyist who has played a key role in the Trump administration’s efforts to unravel protections for federal lands and imperiled species and who has faced accusations of meddling with agency science.

At the top of Biden’s to-do list for Interior is to restore protections for sites that President Donald Trump gutted as part of his industry-first agenda for public lands. Those sites include Bears Ears National Monument, a sweeping landscape in southern Utah that several tribes consider sacred, that honored and protected Native American cultural heritage and that Trump shrunk by roughly 85%.

“The Trump Administration fails to acknowledge the incredible cultural history of indigenous people on this continent,” Haaland wrote on Twitter after the president, who himself has dismantled several land and marine monuments, promised lengthy prison sentences for anyone who destroys or dismantles a monument or statue of a slave-owning president or leader of the Confederacy. “The President’s defense of white supremacy is incredibly insulting and his actions reflect his lack of respect for Tribes.”