Biden participates in first session with G-7 leaders in England

Imagine trying to make an impression on someone who’s met, well, almost everyone.

Such is the challenge for President Joe Biden, who is set to sip tea with Queen Elizabeth II on Sunday at Windsor Castle after a Group of Seven leaders’ summit in southwestern England.

She was a 25-year-old princess when she came to Washington in 1951 and stayed with President Harry S. Truman and his family at Blair House, where Truman lived while the White House underwent a major renovation. She met Herbert Hoover in 1957, more than 20 years after he left office.

Her personal ties to U.S. leaders underscore the importance of the United States to the United Kingdom and to the queen. She came of age during World War II and understands the central role the trans-Atlantic alliance has played in modern British history, said Robert Hardman, author of “Queen of the World,’’ which examines her role representing Britain on the world stage.

“She grew up with that sort of sense of the USA is almost a sort of salvation that came along and rescued Europe in the darkest days of the war,’’ Hardman told The Associated Press.

Here are highlights of some of her meetings, on both sides of the pond, with past American presidents: 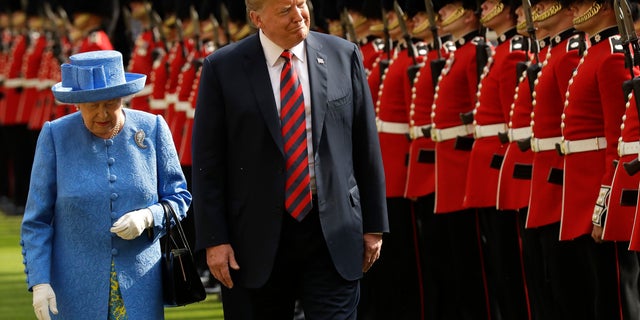 Trump and the queen met in July 2018 at Windsor Castle during a visit to Britain that drew large anti-Trump protests in downtown London, including the hoisting of a balloon that depicted Trump in a diaper.

He was criticized for breaking protocol by briefly walking in front of the queen — instead of alongside her — and turning his back on her as they reviewed an honor guard.

Trump later said he thought of his late mother, Mary Anne, who was born in Scotland and who loved the royal family, when he and his wife, Melania, sipped tea with the queen.

Trump’s subsequent comment that the queen told him that Brexit — Britain’s break from the European Union — was complex also created a stir. Most heads of state keep private their private conversations with the queen. She also doesn’t discuss political matters.

The Trumps and the royals met again during the D-Day commemoration in 2019. 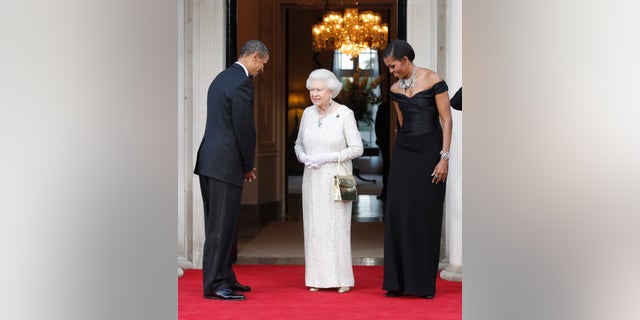 Obama and the queen had their first of three meetings in April 2009 at a reception for world leaders attending the Group of 20 nations summit in London.

It was there that first lady Michelle Obama broke protocol by briefly putting an arm around the queen’s back as they commiserated about their achy feet. It’s generally a no-no to touch the queen, but she returned Mrs. Obama’s gesture.

The queen invited the Obamas for a state visit in 2011 that included a two-night stay at Buckingham Palace and a lavish banquet in the president’s honor.

As Obama delivered a toast to the queen, he didn’t miss a beat when the band assumed that a pause in his remarks meant he had concluded and launched into a rendition of “God Save the Queen.” Obama kept talking over the music until the band quieted down.

The couples saw each other again in 2016 when Obama visited the queen at Windsor Castle a day after her 90th birthday during another swing through Europe. 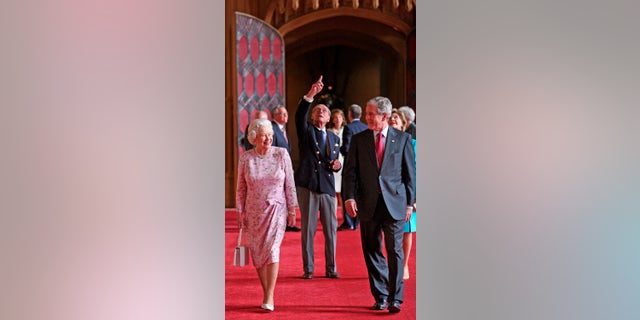 Bush detested stuffy, formal affairs, but he donned a white tie-and-tails tuxedo after the queen pulled out all the stops for a state dinner in his honor at Buckingham Palace in November 2003.

A few years later, Bush’s slip of the tongue generated ripples of laughter at a White House welcoming ceremony for the queen, who was touring the U.S. in May 2007.

Stumbling on a line in his speech, Bush said the queen had dined with several of his predecessors and had helped the United States “celebrate its bicentennial in 17- …” Bush caught himself and corrected the date to 1976, and paused to see if she had taken offense.

“She gave me a look that only a mother could give a child,” Bush said with a smile.

The queen later turned the tables on Bush with her toast at a dinner she hosted for the president at the British Embassy in Washington.

“I wondered whether I should start this toast by saying, ‘When I was here in 1776,'” she said to laughter. 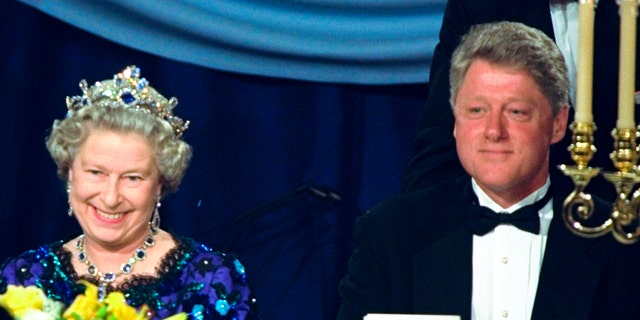 In this Saturday, June 4, 1994, file photo, Britain’s Queen Elizabeth smiles as she sits alongside President Bill Clinton at a dinner in the Guildhall in Portsmouth, England, commemorating the 50th anniversary of D-Day. (AP Photo/Doug Mills, File)

The queen hosted Clinton and his wife, Hillary, aboard her royal yacht, Britannia, in June 1994.

The ship, 412 feet (125 meters) long and 55 feet (17 meters) wide, was docked at the Portsmouth Naval Base and was home base for the Clintons as they attended the queen’s dinner at Guildhall for leaders of Allied nations whose troops participated in the D-Day invasion of Normandy 50 years earlier.

The Clintons spent one night aboard the boat. The next day, the Britannia ferried Clinton to the USS George Washington aircraft carrier as it prepared to sail across the English Channel, from Portsmouth to Normandy, for D-Day anniversary celebrations. 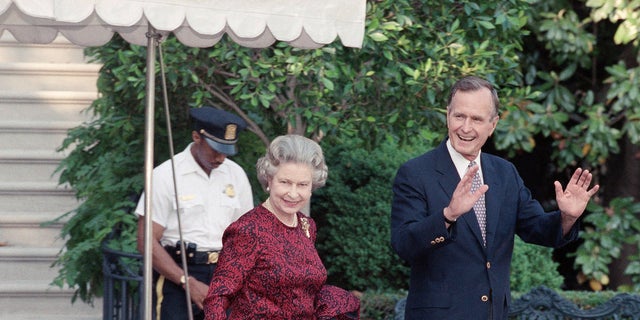 One of the more memorable images from the monarch’s third state visit to the U.S. came in 1991 when only her white-striped purple hat could be seen above the microphones when she spoke at an arrival ceremony on the White House grounds.

Someone forgot to adjust the lectern after the much taller Bush spoke.

The queen stayed strong and carried on, later making light of the incident as she opened an address to a joint meeting of Congress.

“I do hope you can see me today from where you are,” she deadpanned. Bush later apologized and said he felt badly for not pulling out a step for her to stand on. 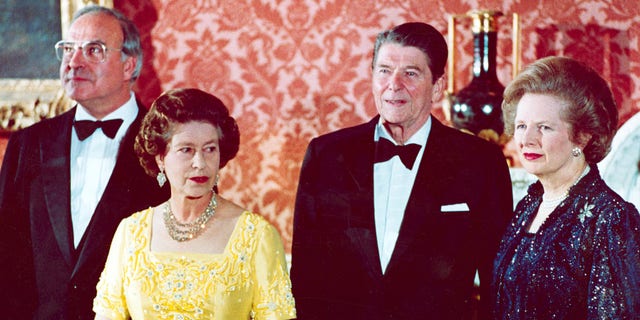 Reagan and the queen bonded over their mutual love of horseback riding.

They rode side by side on an 8-mile (13-kilometer), hourlong tour on the grounds of Windsor Castle when Reagan visited her there in June 1982. Reagan was the first president to sleep over at the British royal family’s historic home, an 11th-century estate overlook the River Thames.

While in the U.S. in 1983, the monarch and Philip stayed with the president and first lady Nancy Reagan at their ranch in Santa Barbara, California. She wanted to ride horses again, but a rainstorm wouldn’t allow it. The Reagans served a lunch of regional staples, including enchiladas, chiles rellenos, refried beans, tacos, rice and guacamole.

They also hosted a state dinner for the queen in San Francisco at the M.H. de Young Memorial Museum. 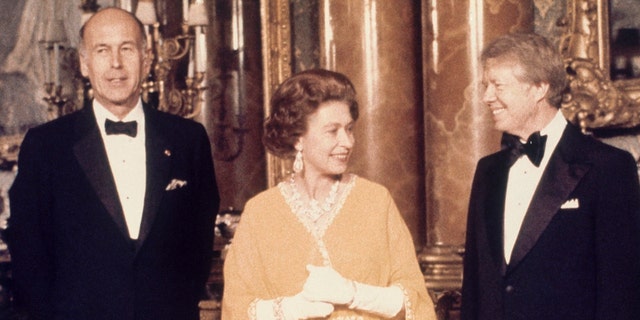 The queen hosted Carter in May 1977 on his first overseas trip at a dinner for NATO leaders at Buckingham Palace. At one point, as Carter stood with the queen and other guests, he noticed the arrival of the queen mother.

Ever the Southern gentleman, Carter broke away, took her by the hand and escorted her to the assembled line of guests.

The no-frills Georgia peanut farmer-turned-president ate chicken mousse off a gold plate and seemed excited by his dinner seating between the queen and her sister, Princess Margaret, and across from her son, Prince Charles, Prince Philip and the queen mother. 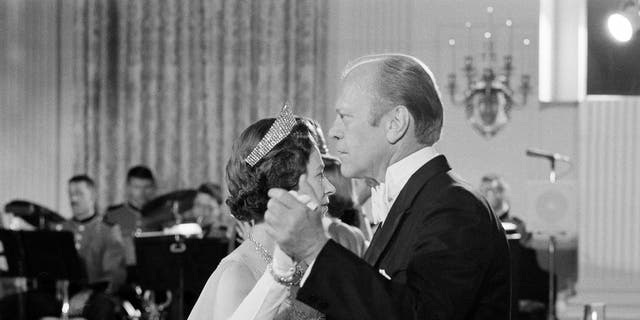 Ford threw a gala state dinner for the Brits in 1976 to mark the bicentennial of the American Revolution. The queen was resplendent in a diamond-studded tiara that sparkled for a crowd that included diplomats, star athletes and celebrities such as Cary Grant and Julie Harris.

The mood evaporated when Ford led the queen to the dance floor while the song “The Lady Is a Tramp” echoed throughout the State Dining Room.