Fresh off a face-to-face meeting with Vladimir Putin, President Joe Biden made the case that the Russian president knows he needs to improve the country’s reputation on the international stage.

Putin is afraid, Biden surmised, that “his credibility worldwide shrinks” as Russia’s human rights abuses, attacks on the free press and reputation for meddling in foreign elections increasingly define how the rest of the world regards the country.

“How would it be if the United States were viewed by the rest of the world as interfering with the elections directly of other countries and everybody knew it?” Biden asked, referring to U.S. intelligence findings that Russia attempted to meddle in the last two U.S. presidential elections. “What would it be like if we engaged in activities that he’s engaged in? It diminishes the standing of a country that is desperately trying to make sure it maintains its standing as a major world power.” 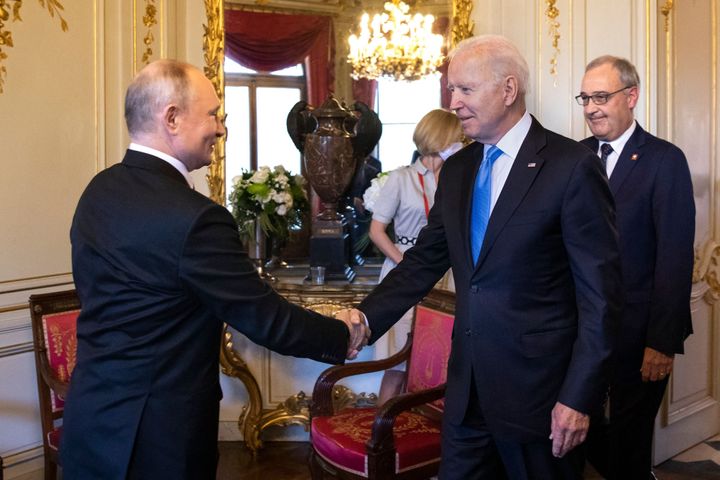 Biden, speaking before reporters in Geneva shortly after Putin held his own press conference, said they had a productive conversation about avoiding conflict, agreeing to arms control measures, consequences of human rights abuses and the detainment of two American citizens in Russia ― Paul Whelan and Trevor Reed.

But moving forward on those issues requires a wait-and-see approach, Biden admitted.

But Putin, by Biden’s own admission, is far from a reliable negotiator. Biden confessed in 2014 that he once looked Putin in the eyes and told him, “I don’t think you have a soul.”

However, Biden bristled when reporters asked how he could trust Putin.

The president grew visibly upset near the end of his press conference as reporters continued to challenge him on the matter, particularly when CNN’s Kaitlan Collins asked how he could be “so confident [Putin] will change his behavior” when the Kremlin’s leader just spent his press conference denying Russia’s role in any cyber attacks, downplaying the country’s human rights abuses and refusing to acknowledge Alexei Navalny, an outspoken Putin critic currently imprisoned in Russia.

Biden snapped at the characterization.

“I am not confident he will change his behavior. Where the hell ― what do you do all the time? When did I say I was confident? … I said what will change their behavior is if the rest of the world reacts to them and it diminishes their standing in the world. I am not confident of anything. I am just stating the facts.”

Biden later apologized in front of reporters before boarding Air Force One.

“I owe my last questioner an apology,” he said. “I shouldn’t have been such a wise guy for the answer I gave.”