President Biden paid a visit to Pittsburgh on Friday, and shortly before he arrived in Pennsylvania’s second-largest city, a bridge carrying Forbes Avenue over a Frick Park ravine collapsed, injuring 10 people and causing a massive gas leak.

The timing of the collapse as the president who proclaimed “infrastructure” a top priority was not the optics the White House was hoping for, American Majority CEO Ned Ryun told “Tucker Carlson Tonight” later Friday.

The Keystone State’s highway infrastructure has for years ranked near the bottom in terms of the condition of its highways, and truckers have long lodged concerns about the ubiquitous potholes and washboard pavement on many of its miles. But, as host Tucker Carlson noted, Biden promised while in Pittsburgh to “fix all of” that city’s bridges following the collapse, which total more than 400.

The Steel City has been reputed to hold the title of home to the most bridges in the world. 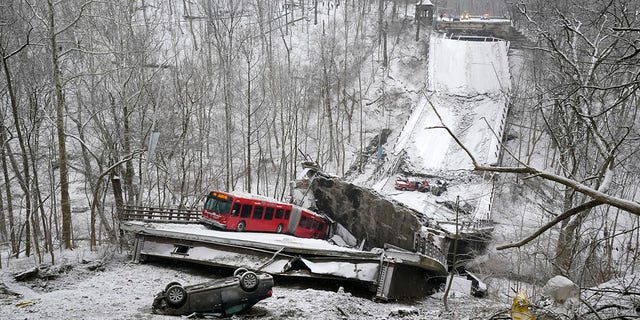 A Port Authority bus that was on a bridge when it collapsed is visible in Pittsburgh’s East End. (AP Photo/Gene J. Puskar)
(AP)

“This is just a continuation, though, as we see the bridges collapse, our borders overrun that the American people have not exactly been a priority for our ruling class,” Ryun said.

The Forbes Avenue bridge dated back to 1973, according to reports.

“This infrastructure bill was a lie, an Orwellian lie — it was the gateway to the Green New Deal with a pittance thrown at real infrastructure.”

“So as our leaders lie to us and juxtapose that against all the money that the trillions that they stole from the American people to fund their foreign wars and the fool’s errand of nation-building, all to watch that multi-trillion dollar investment collapse overnight,” he continued, referring to Biden’s Afghanistan withdrawal.

Ryun, son of former Kansas Rep. Jim Ryun, said events like the Frick Park bridge collapse show that costly foreign wars and other expenditures have long been the priority of the ruling class in Washington, while Americans suffer the consequences in their everyday lives.

The political establishment, he said, views American citizens as “ATMs [Automatic Teller Machines] to fund their priorities — whether it’s ‘equity’ or the Green New Deal.”

“I hope that the American people in the midterms and moving on realized we better make better choices on leadership or we’re going to be stuck with more of this in which our country is crumbling as these people chase unicorns and their pipe dreams,” he said.